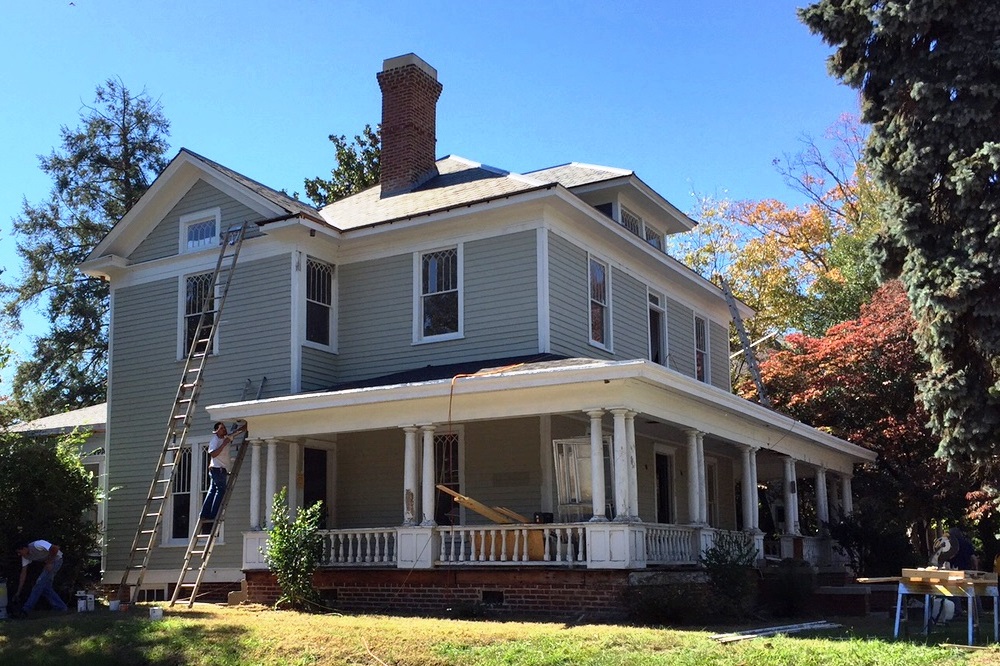 This home was sold in 2014 and has been completely restored

The home stands as an example of an American Foursquare form with Colonial Revival architectural details and holds a corner location in the center of the neighborhood. Vacated after a fire in 2011 and proposed for demolition, neighbors and preservationists banded together to cultivate a strategy for preservation and reinvestment.

The American Foursquare form takes its name from a four-room per floor plan arranged within a cubical block form. The compact house form was popular beginning in the late nineteenth century as it accommodated a single-family detached home within a narrow suburban lot. Foursquares are characterized by a two-story plan, with a broad front porch, symmetrical façade, and a pyramidal roof often punctuated by a central dormer window. The style of the Angle House is inspired by Colonial styles grew after the nation’s Centennial celebration in 1876. Designers mimicked the diamond pane windows, bay windows, attenuated columns, and clapboard siding of early American homes when designing Colonial Revival style houses. The Angle House demonstrates each of these characteristics, with the addition of a broad wrap around porch popular in the Carolina Piedmont to create a home that reflected both national trends and the local Piedmont vernacular. The house was built in 1907 by the Angles, natives of Henry County, Virginia. The family-maintained ownership through their daughter, Mary Ruth, until 1976. In June 2011, the house was severely damaged by fire, and was slated for demolition.

The Angle House was acquired by the Preservation Greensboro Development Fund in 2013 in recognition of its role as a contributing structure in the College Hill Historic District (Local) and the National Register Historic District. The College Hill Neighborhood Association promoted the preservation of the house by seeking approval from City Council to assign gap funding from their Municipal Service District program account to the project. The updated MSD Plan was approved by City Council in September 2013, and the funds were allocated to the Angle project to maintain the important historic fabric of the neighborhood, to encourage private reinvestment, and to secure the future of the highly visible property through a preservation easement held by the Preservation Greensboro Development Fund. Restoration began in 2014.

Utilizing a grant from the 1772 Foundation, the house was “re-sized” through the restoration process after the fire-damaged additions were removed. This reduced the home’s overall square footage and favored single-occupancy use. The process included a broad scope of work including correction of structural issues, electrical rewiring, new HVAC, plumbing, new bathrooms and kitchen in addition to preservation of the slate roof, the wrap-around porch, and distinctive diamond-pane windows. A grant was made to the city from the Marion Stedman Covington Foundation for the restoration of the slate roof, one of the few remaining in the neighborhood. Historic Preservation Tax Credits were utilized for this project.

The Angle House is now one of two homes in College Hill that is preserved through a preservation easement. The easement will require a dialog between future property owners and the Preservation Greensboro Development Fund on major changes and will disallow demolition.

Special thanks to the College Hill Neighborhood Association, the 1772 Foundation, the Marion Stedman Covington Foundation, the City of Greensboro, and the Preservation Greensboro Development Fund for partnering together to save this fascinating house.

Gold House
July 30, 2015
Please Join Us!
Did you know? As Greensboro’s only not-for-profit advocate for historic preservation, we receive no funding from city, state, nor federal sources. Our success is based on your support. Members receive two free passes to Blandwood, and much more. Preservation Greensboro is among North Carolina's oldest city-based organizations dedicated to saving our community's architectural treasures!
Join Us!
Go to Top
Loading Comments...