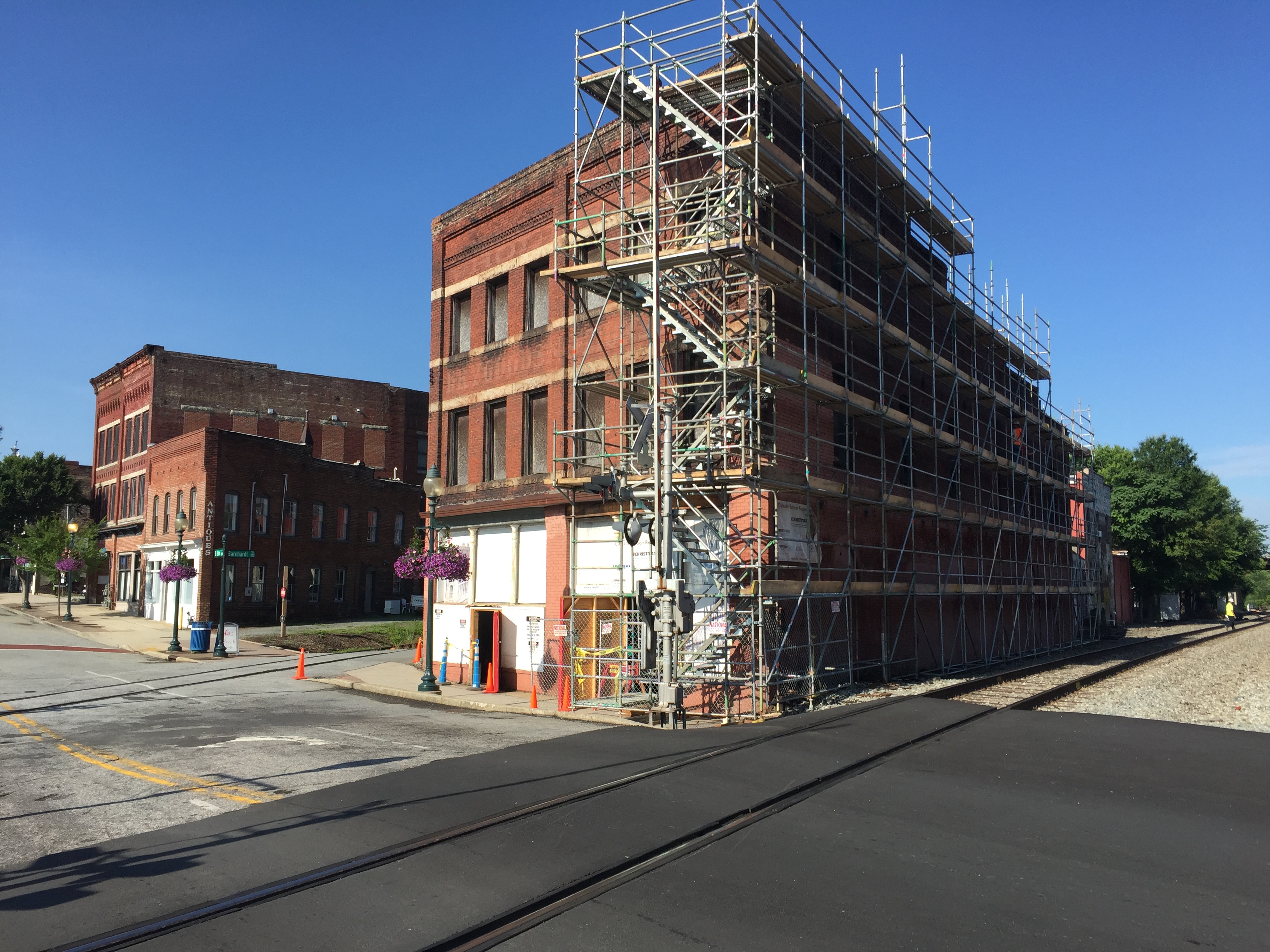 This property was sold for restoration in 2017 for use as Christman Company’s North Carolina Headquarters.

The Cascade Saloon was constructed in 1895 on South Elm Street by Samuel Johnson McCauley (1847-1930) between the North Carolina Railroad tracks to the north, and a spur of the Cape Fear and Yadkin Valley Railway to the south. The architect of the building is attributed to Englishman Thomas Woodroffe, and it is clearly part of a family of Elm Street buildings designed by the same hand that share granite window sills and lintels, as well as patterned brickwork, and elaborate cornices. Though first occupied by a saloon, by 1907 the building housed an “eating house” owned by Wiley Weaver (1882-1922). Weaver and his wife Ida were African-American, and the couple operated the café at a time when Jim Crow Laws sought to segregate African-Americans apart from white-owned businesses. The fact that the Weavers ran their business on Greensboro’s main commercial street is an unusual footnote in North Carolina’s history.

Due to its history and architecture, the building was recognized in in 1982 as a contributing building within the Downtown Greensboro National Register Historic District. In December 2006, the Greensboro City Council recognized the Saloon as a Guilford County Landmark Property. As an alternative to demolition, the building was conveyed to the City of Greensboro in May 2014 in recognition of its history and to address public safety concerns related to the deterioration of the structure. In 2016 the building was transferred to the Preservation Greensboro Development Fund after a plan was developed and partners identified to accomplish a complete restoration of the Landmark property. Preservation partners include the Marion Stedman Covington Foundation, the City of Greensboro, First Citizens Bank, Downtown Greensboro, Inc., and the Preservation Greensboro Development Fund. An anonymous donor contributed $250,000 to the initiative in order to cover a funding gap. The Christman Company, a fully management-owned general contractor that is nationally recognized for its work in historic preservation, will restore and occupy the structure. The company was founded in 1894 by H.G. Christman in South Bend, Indiana, and has eight full-service offices nationwide — Lansing, Detroit, and Grand Rapids in Michigan; Reston, Virginia; Augusta, Georgia, Knoxville and Chattanooga, Tennessee. Greensboro’s Cascade Saloon will serve as the North Carolina office.

The $3 million project will be restored utilizing state and federal Historic Tax Credits for income-producing properties. In order to qualify for the credits, the building must be restored to the Secretary of Interior’s Standards for Rehabilitation. The Standards are recognized as preservation threshold that recognized the most architecturally important details of a site and preserves those elements using proven technologies. Christman is well-versed in working with Tax Credit projects. They have established an international reputation for restoration and preservation expertise that has been brought to the challenging Cascade Saloon project. For more information on the history of the Cascade Saloon, follow this link.