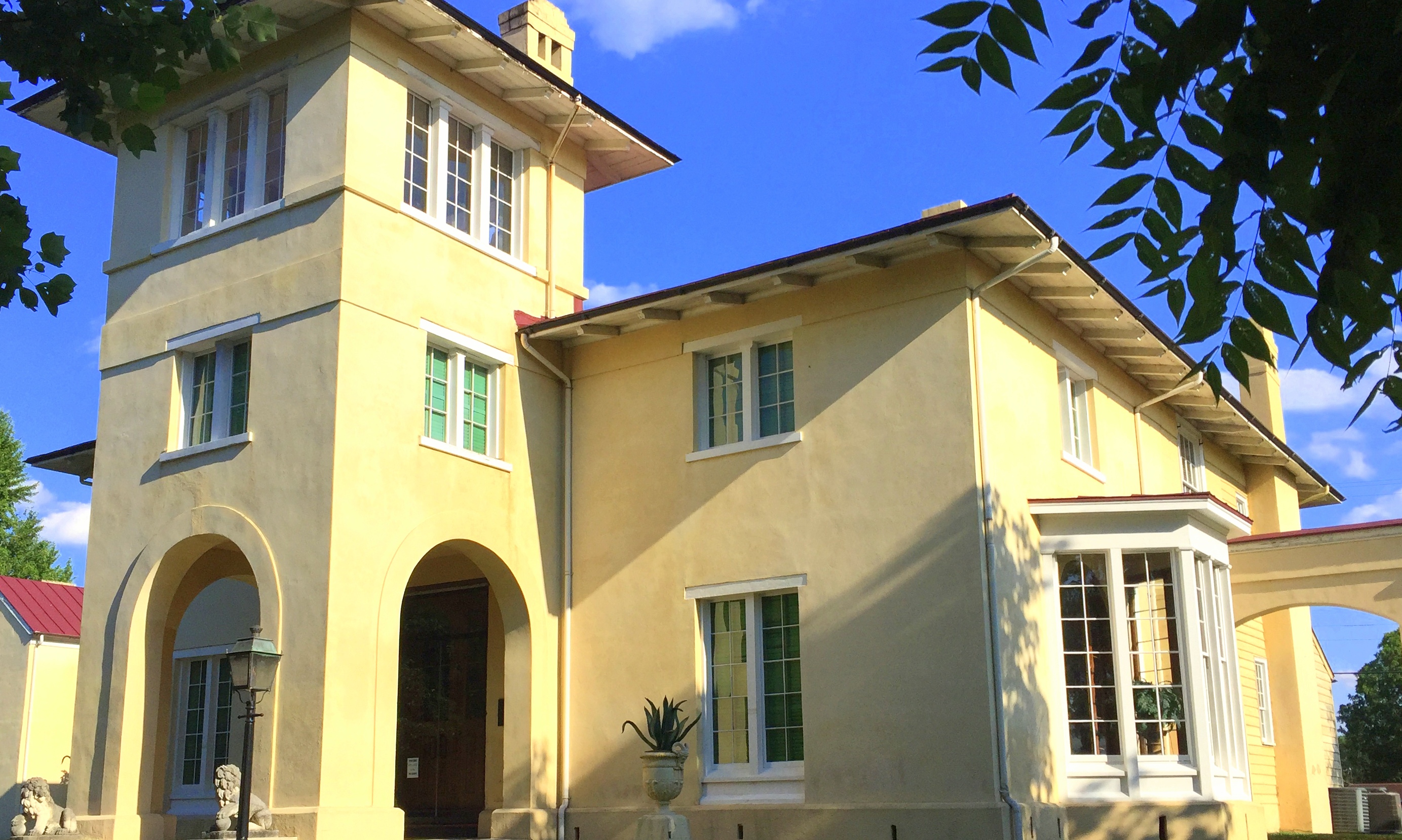 Why is Greensboro’s Blandwood Mansion the best place to learn about North Carolina history? “History happens here” says Benjamin Briggs, executive director of Preservation Greensboro, the non-governmental organization that owns and operates the museum. “The site’s primary associations are with two-term North Carolina governor John Motley Morehead. However, many other key figures in the state’s history passed through Blandwood at some point in their lives, including politicians, artists, entrepreneurs, and human rights advocates.”

Top 10 reasons why Blandwood is the best place to learn about North Carolina history:

9. Making Tracks. Governor Morehead considered his greatest life legacy to be the establishment of the North Carolina Railroad. In fact, so strongly did he connect with the rail line that his official portrait shows the “North Carolina Railroad” in his hand, and he instructed his grave-site to be within earshot of the train whistle. As Governor and as a private investor, Morehead championed other transportation improvements, including the creation of a new seaport at Morehead City, canals along the Deep and Smith Rivers, and an initiative to improve roads across the state.  Today, the North Carolina Railroad Company owns and manages the 317-mile rail corridor that connect Charlotte to the Port Terminal in Morehead City. The private business corporation is owned by the state of North Carolina, and it provides a vital tool in North Carolina’s economic development. Greensboro is it’s keystone, and Morehead made sure the rail crossed the tip of his property…Blandwood!

8. Carolina In My Mind. Morehead attended the University of North Carolina where he served as a member of the Dialectic Society and could readily quote from Shakespeare, Milton, and Burns. He graduated in 1817, and later served as a university trustee and the founding president of the UNC Alumni Association (1843-49). His love of education extended far beyond the UNC campus. He was instrumental in establishing numerous schools, including the Caldwell Institute for boys in 1836, the Edgeworth Female Seminary in 1840, and a school the deaf in 1845. His funding of public education, or “common schools” was a priority of Morehead, but his work with UNC is most remembered today. He even invited the University’s architect, Alexander Jackson Davis, to redesign his home…Blandwood!

7. Italianate Starts Here. Speaking of architect A. J. Davis, he provided the designs for America’s oldest Italian Villa – which is Blandwood Mansion. Morehead sought to make an architectural calling card of his home to reflect that North Carolina was just as progressive as Philadelphia, New York, and London. He hired Davis, a nationally acclaimed architect, to design additions to his home that reflected the cutting edge of American architecture. The style in vogue in 1844 was the Italian style, and Davis designed the second Italianate house in America for Morehead. The architectural plans for Blandwood reside in the Metropolitan Museum of Art and the New York Public Library. With the destruction of the first house, Blandwood stands as the earliest example of the Italian Villa style in the country, and grandparent of all Italian Revival structures across the country ranging from San Francisco to Key West.

6. The Carolina Industrial Revolution. North Carolina is known for its textile history, and threads of the Carolina Industrial Revolution lead to Blandwood. An early occupant of the house was Henry Humpreys. He established Mount Hecla Steam Cotton Mill in Greensboro in 1834. The mill was the first in North Carolina powered by steam, a mode of operation that later became the standard. The Mill inspired a generation of textile entrepreneurs across the Carolina Piedmont, setting the stage for industrial growth well into the next century. In fact, Humphrey’s step son-in-law, John Motley Morehead, was center-stage in the scene, operating a water-powered industrial complex in nearby Rockingham County that produced cotton cloth, yarn, and wool in addition to a saw mill, oil mill, cotton gin, blacksmith shop, and a grist mill. That industrial past connects both Humphreys and Morehead…to Blandwood!

5. Wonder Women. Perhaps it can be attributed to the egalitarian Quakers who populated Greensboro, or maybe it’s the pragmatic approach to living in the backcountry – but women’s history surrounds Blandwood. Morehead’s establishment of the Edgeworth Female Seminary adjacent to his home was a tribute to novelist Maria Edgeworth. The Seminary provided the finest education for his five daughters and other young women until it closed during the Civil War. The eldest daughter, Letitia Morehead Walker, capably managed her own plantation while professionally identifying as an artist. She served as one of the nation’s first preservationists as a regent to the Mount Vernon Ladies Association, a role she held for nearly 50 years. Occupants of Blandwood are not the only women who made history. Dorothea Dix visited the house in 1848 to lobby then Governor Morehead to erect special facilities for those with mental illness. She was successful; the Dorothea Dix Hospital was opened in 1856.

4. Got Art? The art collection at Blandwood touches on two major themes of nineteenth century painting in North Carolina, including landscapes and portraits.  William Charles Anthony Frerichs (1829 – 1905) was a noted Flemish artist who immigrated to North Carolina where he is thought to be among the earliest artists to depict the sweeping panoramas and wild landscapes of western North Carolina. His paintings of the dramatic wilderness vistas of the Southern Appalachian Mountains connect him to artists of the Hudson River School. He lived in Greensboro for ten years, teaching and traveling the western terrain of our state. He remains a primary figure in North Carolina’s art history. Seven of his pieces can be seen at Blandwood in their original setting. William Garl Browne, Jr. (1823 – 1894) practiced in North Carolina in the second half of the nineteenth century painting portraits of prominent figures including Governor Morehead. Browne was commissioned to paint at least seven other members of the extended Morehead family, and all eight may be seen by visitors.

3. North Carolina’s Hardcore Hardwood. Along with basketball, railroads, and textiles, North Carolina is known for its furniture history. Where better to learn about local furnishings than in their original setting? Blandwood contains a high degree of original Morehead furnishings that were donated by family members to the museum in the 1970s. Among the star-pieces are a locally crafted 200-year old corner cupboard, an early reclining chair, an Empire-style parlor suite, and Governor Morehead’s childhood cradle. The centerpiece of the collection is an 1826 Loud and Brothers pianoforte, original to Blandwood when the Moreheads occupied the house. The Morehead Collection at Blandwood illustrates the transition from locally handcrafted furniture to voguish selections from bigger cities. Blandwood is one of the few museums in the state to display furnishings and interior design from the mid-nineteenth century.

2. Civil War Turning Point. In February 1861 Morehead served as a delegate to the unsuccessful “Peace Conference” held in Washington to head off war between the North and South. Morehead’s record on slavery was complicated. Although he earned support from Abolitionists and defended voting and education privileges for free black men, he also defended and participated in the slave economy. Perhaps Morehead’s greatest contribution to the Civil War was in ending it. He did so in 1865, when he was called upon by Governor Zebulon Vance to broker a surrender of North Carolina to Union General Cox. The much anticipated surrender took place at Blandwood on the evening of May 2nd, 1865.

1. History Happened Here. In 1988, the National Park Service recognized Blandwood as a National Historic Landmark, one of 39 such Landmarks that range from Biltmore Estate in the west to the Wright Brothers National Monument in Kill Devil Hills in the east. National Historic Landmark designation recognizes each site’s exceptional value or quality in illustrating or interpreting the heritage of the United States. National examples include the Empire State Building, Alcatraz Island, and Independence Hall. Blandwood traces so many themes of state history that few places can rival the degree by which North Carolina history happened there.

All tours of Blandwood Mansion are led by trained docents. During our regular hours of operation tours are available on a walk-up basis. If a tour has started prior to your arrival, it may be necessary for you to wait until its completion to start your tour.