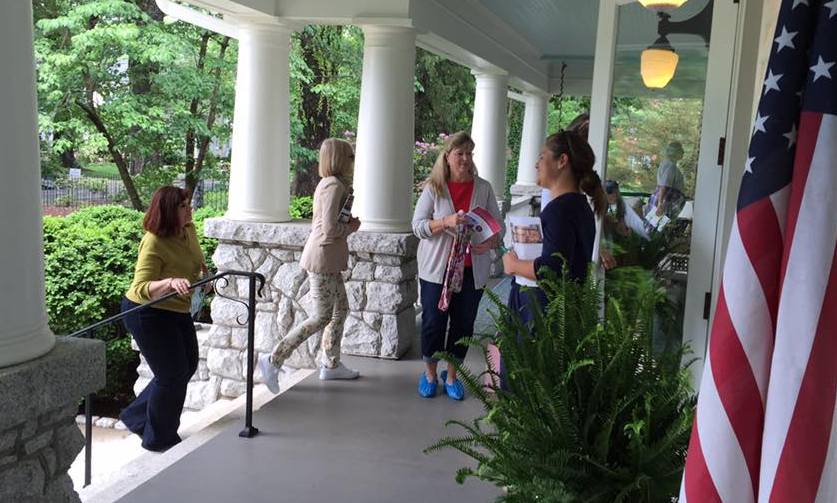 In 2016, Preservation Greensboro undertook an ambitious calendar in recognition of its Golden Jubilee anniversary. The result was a diverse itinerary of accomplishments and events. This top ten list illustrates those that made the cut.

10. We were touring maniacs! Not only did the organization go all-out by offering weekly walking tours of mainstay neighborhoods such as College Hill, Summit Avenue, and Fisher Park, but we expanded our offerings by adding new tours in communities such as the Center City’s Creative Quarter, Lindley Park, and Sunset Hills. On coach tours we explored the State Capital and Executive Mansion in the spring, and in the fall we saw Caswell County’s incredible ante-bellum homes including one designed by African American cabintmaker maker Thomas Day. We even partnered with our friends at the Weatherspoon Art Museum and Studio Traveler with a tour to Havana Cuba where we toured the old city, Moro Castle, and the Valle de Viñales. Historic architecture is a great way to bring people together to explore.

9. We brought new folks to Greensboro and Guilford County. In June, members of the Vernacular Architecture Forum, an organization focused on North American architecture visited Jamestown and Sedalia on a tour created by Michael Southern and Preservation Greensboro’s Benjamin Briggs. Visitors saw the Old Brick Reformed Church (1841), the Jamestown Indulged Meeting House (1819), and the Palmer Memorial Institute (1926-27). In October, Greensboro hosted Preservation North Carolina’s Annual Conference. Entitled “Shake It Up”, the conference showcased diversity through numerous Greensboro sites including the old Temple Emanuel, Pfeiffer Chapel at Bennett College, the International Civil Rights Museum, Elsewhere, and the Revolution Mill. Finally, our local architecture is getting some much deserved recognition!

8. We rocked in Irving Park! The 2016 Tour of Historic Homes & Gardens was held in Irving Park, and we enjoyed a unique opportunity to peek inside six stunning homes designed by Gate City star-architects such as Charles Hartmann, Harry Barton, and Edward Loewenstein. Architectural themes included Neoclassical, Renaissance, Colonial Revival, and Mid-Century Modern. Irving Park is one of the earliest golf-course-centered neighborhoods in the state, and tour-goers were able to enjoy the expansive greens, fairways, and gardens over the spring weekend.

7. We tightened up our gardens. In the spring, our garden volunteers replanted the antebellum rose collection at Blandwood. Blandwood’s rose garden, or rosarium, is open to the public and used to present antebellum rose species. The formal garden was established by the mid-nineteenth century by Letitia Morehead Walker, the eldest daughter of Governor John Motley Morehead. Hedging and low masonry walls frame beds filled with period bush and shrub roses that were popular when Letitia referenced the garden in the 1840s. In spring and late summer, they provide eye-catching color and fragrance, from the pink Champney’s Cluster (1811) to the apricot blend of Safrano (1839).

6. We tightened up our history. Over the past year, historian Reneé Donnell completed a research project to examine genealogical research associated with the extended Morehead family and enslaved residents. Through funding from the National Trust for Historic Preservation and the Community Foundation of Greater Greensboro, Ms. Donnell reviewed a number of previously unknown resources, including a batch of slave deeds discovered in the Guilford County archives. Discoveries found this year, including names and narratives of enslaved people, have already been incorporated into the docent narrative used to guide visitors touring Blandwood.

5. Who needs to travel?  From the graffiti covered walls of the Printworks Factory to the Venetian-inspired extravagance of the Sternberger Artists Center, we enjoyed the breadth and depth of Greensboro’s architectural history through individual site tours. We cocktailed in the Colonial Revival country manor house known as “Hillside”, designed by Philadelphia architect Brognard Okie in 1929. Then, we mingled in a charming 1914 Methodist Episcopal church that has been creatively reused as office space by the Edgewater Group on Old Battleground Road. With such a diversity of interesting architecture right here in the Gate City, who needs to leave the city limits?

4. We saved some great places. In 2016, the finishing touches were made on the Carrie and Charles Angle House in College Hill. Vacant after a major fire in 2011 and threatened with demolition, the 110-year-old house enjoyed a complete restoration as a single-family home. In addition, two historic bungalows in the Glenwood neighborhood were transitioned back into private ownership. There is much more to come as our Development Fund pursues new projects with historic buildings whose preservation is beyond the reach of their owners and developers, including exciting progress on landmarks such as the Cascade Saloon on South Elm Street.

3. We kept some really cool stuff out of the landfill. Our volunteer S.W.A.T. Team (Saving Worn Out Architectural Treasures) was busy in 2016 extracting vintage building materials from places slated for demolition that would otherwise be sent to our landfill. The Team worked with owners in numerous neighborhoods, including Rankin Road in northeast Greensboro, downtown, Westerwood, Sunset Hills, Pleasant Garden, and Gibsonville. Items salvaged included stained glass windows, lighting fixtures, cabinetry, mantels, and hardwood flooring. In addition to the salvaging, the Team put on a Strip-Show in the Sunset Hills neighborhood to illustrate how to restore vintage brass fixtures such as doorknobs and hinge hardware.

2. We brought North Carolina’s leaders together. In the spirit of Governor John Motley Morehead’s convivial hospitality, the Morehead Forum convened North Carolina’s leading thinkers and decision-makers at Blandwood. In May the Forum brought together the former president of the University of North Carolina System Thomas Ross with the current president Margaret Spellings. In October, the Forum brought a landmark event to Greensboro when it hosted six higher education Presidents: Phyllis Worthy Dawkins of Bennett College, Carol Quillen of Davidson College, Richard Brodhead of Duke University, Leo Lambert of Elon University, Jane Fernandes of Guilford College, and Nathan Hatch of Wake Forest University at an educational summit. The event was moderated by D.G. Martin of North Carolina Bookwatch, and focused on shared opportunities and challenges in higher education. Governor Morehead would feel right at home!

1. We celebrated 50 years! That’s fifty years! Few preservation organizations around the country can claim such a milestone, so we celebrated on a grand scale with our friends at O.Henry Magazine by throwing a spectacular gala evening held beneath a tent on the grounds of our Blandwood Mansion. Our National Historic Landmark grounds never sounded better as we recreated Frank Sinatra’s historic 1966 performance at the Sands with the Count Basie Orchestra. Featuring John Love and the Doug Burns Big Band Orchestra, our Gala was a night to remember and a wonderful way to thank friends and donors for their support. This event, and all of the accomplishments listed above, were a fitting way to celebrate Preservation Greensboro’s 50 years of service to our community!