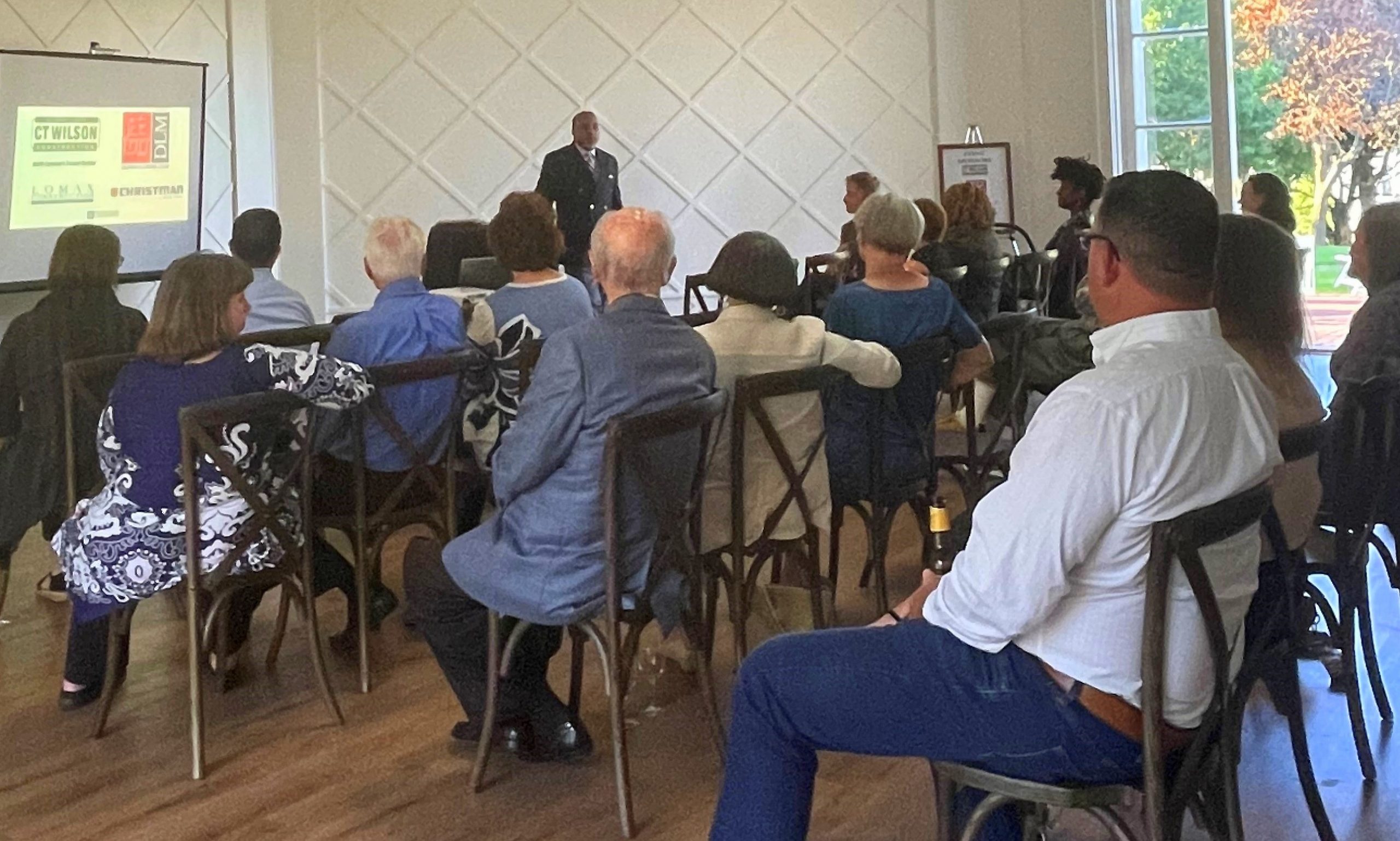 Preservation Greensboro Incorporated held its Annual Meeting on an inaugural new date to meet the schedule of its new fiscal year. Previously held in February to celebrate the end of the calendar year budget, the new September date also allows for late summer outdoor events.

The Historic Magnolia House, located at 442 Gorrell Street in the Southside received a Preservation Award. Like a fine wine, restoration of this iconic Greensboro treasure was not completed overnight. The house was built in 1889, but in 1949 it was included in the famous Green Book as accommodation for Black travelers, and it attracted a remarkable list of names ranging from musicians Ray Charles, Louis Armstrong, Ike and Tina Turner, to baseball Hall of Famer Jackie Robinson, and authors James Baldwin and Carter Woodson…and so many more. The house was closed as an inn around 1968 and fell into disrepair by the early 1990s.

Sam Pass acquired the house in 1996 and began the careful restoration process. When he completed the exterior restoration in 2007, Preservation Greensboro recognized his work with a Preservation Award. Sam’s daughter, Natalie Pass-Miller picked up where her dad left off, restoring the house to a level that has gained national attention as a living museum. Today it is again a hotel, dining, venue, and special events center that has been showcased in House Beautiful, Designer’s Today, WUNC, and Travel + Leisure. Again, we recognize the work of Sam and Natalie for their passion for preservation through this much-deserved second award.

A Preservation Award was also issued to the Mabel and Clyde Crevensten House at 807 Simpson Street in the Fisher Park neighborhood. The bungalow at 807 Simpson Street was built in the summer of 1928 by Realtor and builder Clyde G. Crevensten. He and his wife Mabel were the first occupants of the house in 1928. They lived there for only a short time ahead of the Great Depression. The couple met in Greensboro and married in June 1927. Crevensten and his father were quite active building cottages and bungalows during the Gate City’s boom era, including Westerwood, College Park, Lindley Park, Sunset Hills, and Fisher Park.

Janet and David Craft acquired the house in 2020 as a modest-sized replacement for their longtime home on Church Street. The brick house suffered from a lack of reinvestment for years, and the pair hired Joe Thompson and the New Age Builders team to completely restore the house. It was restored using Historic Tax Credits and completed to the rigorous guidelines of the Secretary of Interior’s Standards. Today, the house stands reinvigorated and importantly, still a bungalow as designed by its builder!

Dr. Darin Waters was the keynote speaker. Dr. Waters serves as North Carolina’s Deputy Secretary for the Office of Archives and History, where he oversees the State Historic Preservation Office. He is also a member of the African American Heritage Commission, the secretary of the North Carolina Historical Commission, and is a member of the Board of Directors of Preservation North Carolina. He spoke about challenges in the preservation movement and exciting new historic sites including cabinetmaker Thomas Day’s workshop known as the Union Tavern in Milton and the home of Civil Rights activist Golden Frinks in Edenton.