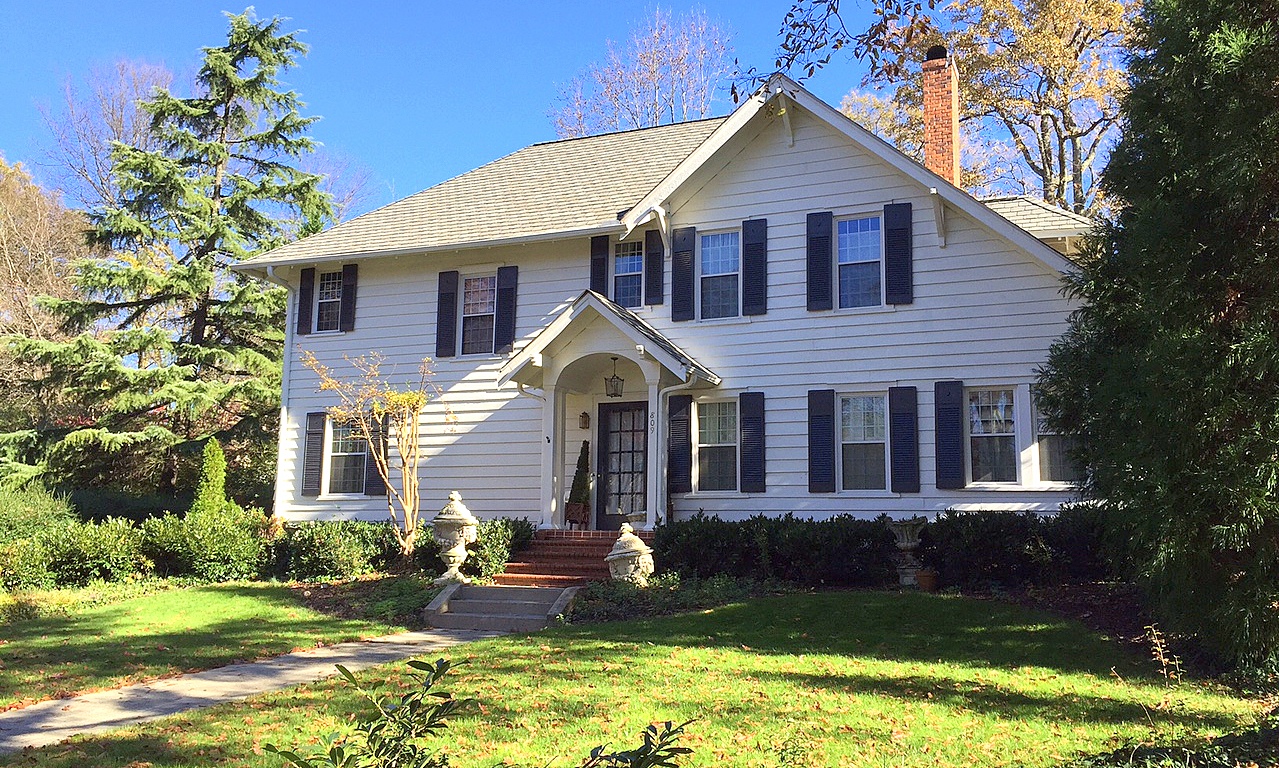 In 1918, J. Van Lindley announced plans for the development of his property in west Greensboro, previously leased by an amusement park. He gifted 44 acres along the North Buffalo Creek including floodplains and woodland to the city of Greensboro for use as a park and hired landscape architect Earl Sumner Draper of Charlotte to coordinate boundaries for the park and its subdivision. Draper prepared a master plan with parkland fringed with curvilinear streets and intersected at acute angles. Plans were interrupted by Lindley’s death in 1918.

Named Lindley Park, the subdivision was developed by Charles A. Banks, Jr. and featured nearly 60 acres of park space and 1,406 building lots. Construction was restricted to one residence and outbuilding per lot. All residential structures were to cost at least $7500 and had to obey setbacks of 45 feet from the front property line. Sales were racially restricted, though exceptions were made for domestic servants and their families. No religious restrictions were placed in the deeds. All such contractual deed restrictions expired on June 1, 1950, but restrictions based on race were ruled unenforceable by the Supreme Court in 1948.

The first residences erected in the Lindley Park plan were along Willowbrook Drive and Lindell Road, overlooking a greensward and stream. The first house, completed in 1924, was the Ethel and Jack Hardin House at 809 South Lindell Road – a blend of Colonial and Craftsman styles reminiscent of the resort cottages built in Pinehurst. The second and third houses include the Craftsman bungalow of Annie and Luther Klutz House at 2612 Sherwood Street and the Dutch Colonial Nancy and Henry Clendenin House at 904 Willowbrook. Another early house within the original Lindley Park plat is the Victoria and Percy Siler House at 902 Willowbrook, completed around 1928. Siler was a brick contractor and enjoyed a brick home with an English theme featuring a clipped gable and façade of irregular symmetry.

The Hardins
John “Jack” Lacy Hardin was born 11 January 1889 in Greensboro. He was remembered as a popular boy in Greensboro, serving as a carrier for local newspapers. He graduated from Greensboro public schools and eventually found a career in finance as a banker before rising to a position with the Pilot Fire Insurance Company and its parent company, McAllister, Vaughn & Scales.

On June 19th, 1914, Miss Ethel Alley married the popular young businessman. Ethel Katherine Alley was born in Gate City, Virginia in 1879. The wedding took place her parents’ Greensboro home on Highland Avenue and was “decorated with by asparagus ferns and daisies” and set to the music of Mendelssohn’s Wedding March. The couple honeymooned at Lake Toxaway and Asheville before settling back to Greensboro. John took a job as bookkeeper with the local supplier of Seidenberg & Company cigars and the couple moved to a modest bungalow at 214 Florence Street in Fisher Park.

In September of 1924, when Hardin took a position listed as “special agent” with the insurance company of McAlister, Vaughn & Scales, he and Ethel purchased the house built at 809 Lindell Rd for $14,000. A newspaper article in the Greensboro Daily News in December 1924 documented that the Hardins were the first family of Lindley Park. “We have completed four new homes so far,” developer Charles A. Banks remarked, “The first home owner in Lindley Park was Jack Hardin, special agent for McAlister, Vaughn and Scales; the second finished residence is occupied by L. E. Klutz, of the same firm, and the third was sold to H. W. Clendenin, local realtor.”

The architecture of the house blends Colonial Revival with the Craftsman style to create a casual and familiar design that seems uniquely suited to the Carolina Piedmont. As one of the thirteen original colonies, North Carolina culture is grounded in the Colonial Period, but progressive ideals in the Piedmont in the early twentieth century brought new ideas to the region, symbolized by the creative and casual Craftsman style.

Examples of this fusion of styles can be found in the resort village of Pinehurst, Raleigh’s Cameron Park neighborhood, the mill town of Badin, and Winston-Salem’s upscale Reynolda House. Colonial Revival details of the Hardin House include an arched front porch stoop, window shutters, and dormer windows. Craftsman appointments include wide overhanging eaves supported by diagonal up-braces and an asymmetrical facade featuring a prominent forward gable. A south-facing porch was trimmed in rustic wood lattice. The architect remains unknown.

Jack went on to become Vice President of the Central Industrial Bank and its successor, the State Industrial Bank. The couple and their two children, Virginia Stewart (1916-2009) and John “Jack” Hardin Rochelle (1923-2011), moved to a new home in Sedgefield around 1928. After elder Jack died in 1930 of pneumonia at the age of 41, Ethel married Talmadge Vernon Rochelle in 1932. Young Jack was adopted by his stepfather and grew well-known in High Point as the president of Globe Furniture Company.