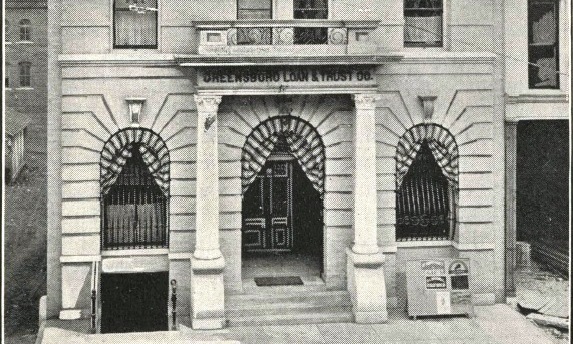 Rising over South Elm Street, the Greensboro Loan and Trust Banking House is a distinguished example of Renaissance Revival architecture by Charlotte architecture firm Hook and Sawyer. Begun in the summer of 1900, it is one of the earliest high-styled commercial facades in the city and represents an influence of the World’s Columbian Exposition of 1893 that promoted the use of Classical Revival architecture for monumental civic structures. This building evokes Renaissance period designs of Italy with its classical ornament, including banded brickwork with raised joints, broken pediments of stone above windows, along with wreathed windows and a heavy acanthus leaf modillion cornice. The design attracted attention in Greensboro when it was announced “the front will be of granite and white brick of special design, different from anything in the city.”

On 17 October 1900, the Greensboro Patriot reported “The construction of the Greensboro Loan and Trust Company’s new building will soon be under way, Mr. J. N. Longest having been retained to superintend the work. President J. W. Fry’s illness has interfered with the closing of contracts, but he has recovered sufficiently to arrange the preliminaries for the work. The building will occupy the corner lot just south of the McAdoo House and will be four stories high, with an attractive exterior and modern interior appointments. The first floor will be occupied by the banking department of the company, while the upper floors will be subdivided into offices. It will be a handsome building in every particular and a credit to the city.”

The firm of Hook and Sawyer was formed by architect Charles Christian Hook and New Yorker Frank McMurray Sawyer. The partnership operated from 1898 to 1905 and completed over 100 projects. Greensboro Loan and Trust Company was chartered in 1899 with Captain J. W. Frye, the former general manager of the Cape Fear and Yadkin Valley Railroad as its president. Within five years of its founding, the institution held the fifth highest deposits and assets in the state. The building was part of the $8 million Greensboro Court at Hamburger Square project completed in 1986.

The building was designated a Contributing Structure to the National Register of Historic Places in 1980 and as a Guilford County Landmark Property in 1992.