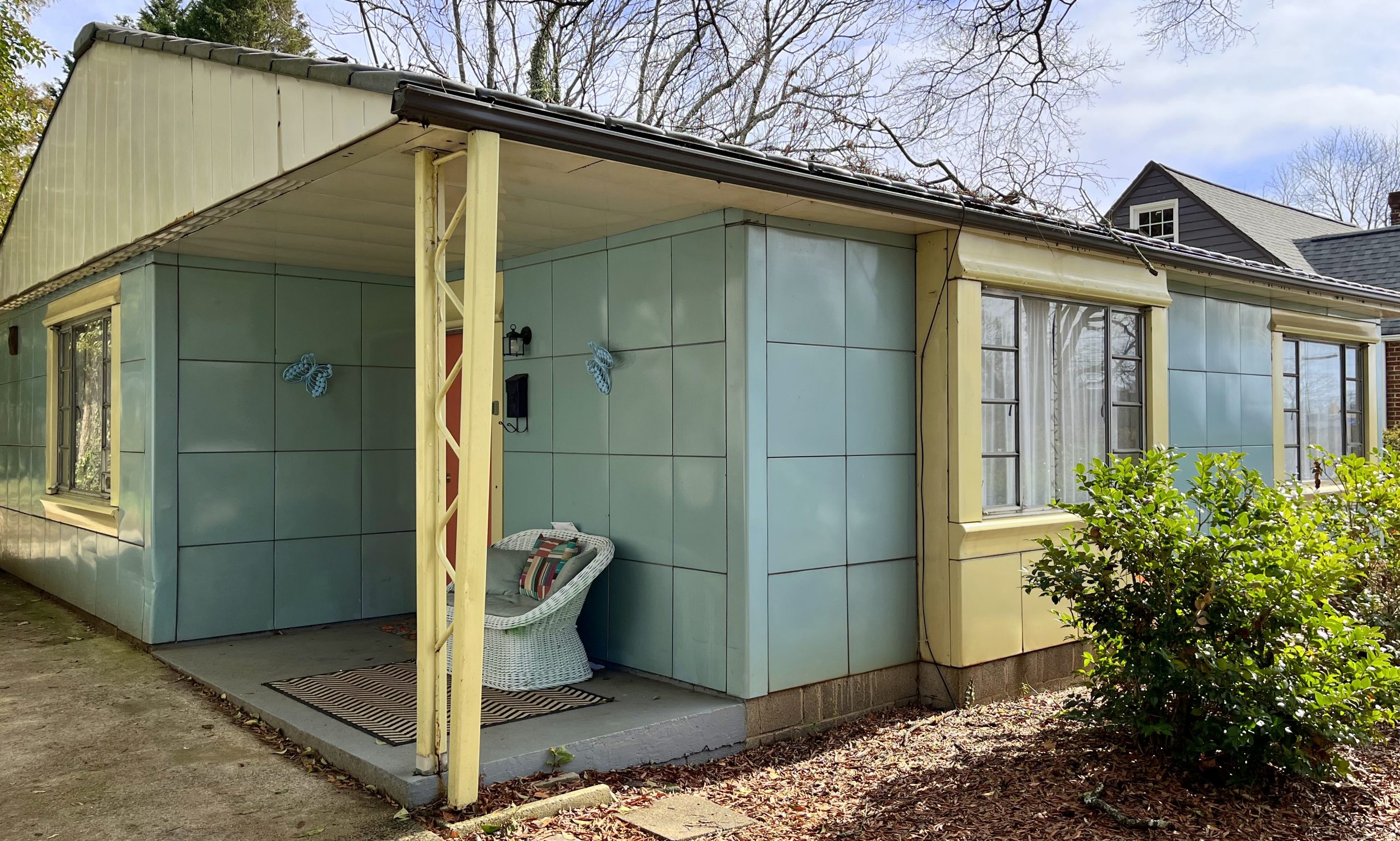 The 56th Annual Meeting of Preservation Greensboro Incorporated was held on the evening of Wednesday, February 9th on Zoom. The free meeting was attended by members and friends of Greensboro’s historic preservation movement.

Members approved a slate of officers and directors that will be led by Board President Chris Carlson. Carlson has deep family roots in historic preservation and lives in a century-old farmhouse. Members also enjoyed a year in review and learned of highlights for the coming year.

These two Lustron Houses represent an innovative moment in US history. Made of prefabricated enameled steel, these houses were developed in the post-World War II era as our country responded to a shortage of homes for returning G.I.s. Carl Strandlund of Chicago was the industrialist and inventor who created these durable and low-maintenance homes.

However, there is no such thing as a maintenance-free house, as Karen Moorefield and Halstead McAdoo can testify, as owners of these two charmers. To top off regular maintenance challenges, you cant just go to the local home improvement store to buy parts for an enameled steel house! Karen and Halstead have been careful to preserve both of these homes, which are now used as Air BnBs. Here in Greensboro, you can sleep 1940s-style in our sleek and well-preserved Lustrons! Thank you to Karen and Halstead for their diligent work to preserve these unusual houses.

Florence and Robert Turner were the first occupants of this house that was likely erected circa 1938. Robert was a retired telegraph worker, and the couple moved to the house from nearby Wright Avenue before Robert died in 1939.

When Nicole and Rich Naviglia purchased the house in 2016, the original charm of the façade peeked out from behind vinyl and aluminum siding. The couple found craftspeople who could painstakingly rebuild, restore, and replace the missing and damaged wood details – from the window trim to the rafter tails and long removed eave brackets. Nicole explains “in true old home fashion, lots of unexpected fun surprises like the fact that the two sides of our house don’t match in terms of measurements – as my husband says it’s like one guy built the left side and one guy built the right and they met in the middle.” Through their work, this house is a great example of the results of a restoration that was steered by authenticity, not fleeting style trends.

The Martha Stewart House was constructed around 1903. Martha Stewart was widowed and lived here with her three children, Lizzie, Ernest, and Florence. Lizzie was a stenographer, Ernest was a bookkeeper, in a cotton office…presumably for Cone Mills. By the twenty-teens, this house was a triplex and was suffering from disinvestment.

Laurel and Dean Driver purchased the house in 2017 and began a careful restoration that retained the house as a triplex investment property. The extensive restoration addressed structural issues and neglected features under the eye of the Greensboro Preservation Commission and the National Park Service to qualify as a tax credit project. Thanks to the drivers, this house received a much-needed investment to preserve it for future generations to enjoy.

Tom Mayes was the keynote speaker for the evening. Mayes currently serves as Chief Legal Officer and General Counsel at National Trust for Historic Preservation. He has written and spoken widely on why old places matter to people in our contemporary world.