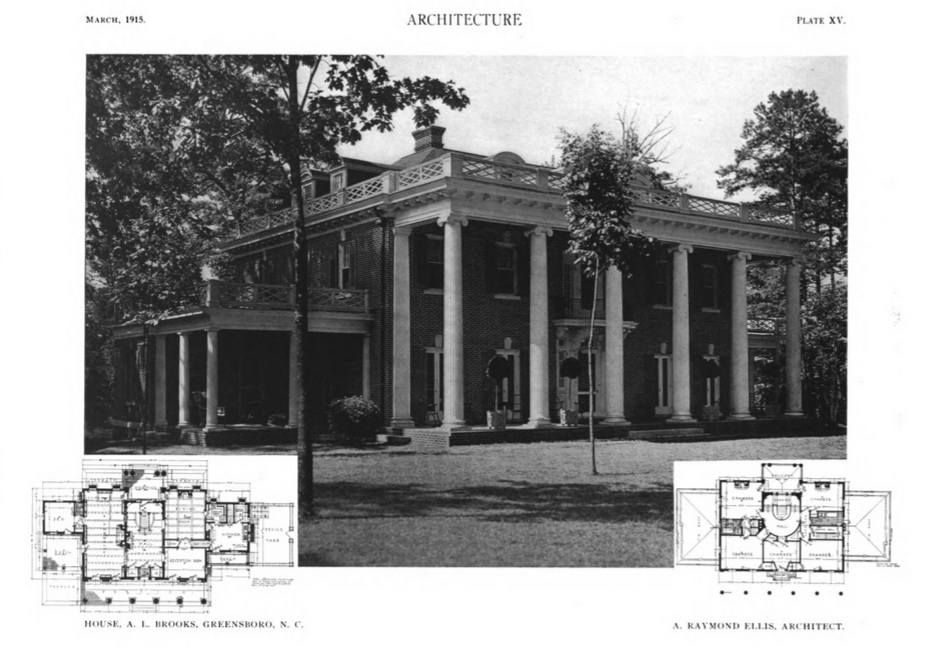 The economic prosperity brought on by Greensboro’s insurance, banking, tobacco, and textile ventures in the early 20th century resulted in a remarkable architectural patrimony that is of statewide importance for North Carolina. Among the structures of that period, Greensboro contains an outstanding collection of grand residences that were commissioned by white collar professionals who sought to assert their social stature through architecture. Within this class of residential architecture, Poplar Hall stands among the earliest and most monumental examples in the city.

Aubrey (1871-1958) was educated at both the University of North Carolina Chapel Hill and the University of Kentucky. He earned a law degree from UNC Chapel Hill in in 1893 and was granted a license to practice law by the state’s Supreme Court in September of that year. He married first wife Maud Harris (1874-1903) in 1895, and second wife Helen (1878-1974) in 1910. Brooks moved to Greensboro in June 1897, and he quickly established himself within social circles as able lawyer and a faithful leader of the Democratic Party. He was a renowned attorney in Greensboro for 50 years and was the senior partner in the law firm of Brooks, McLendon, Brim, and Holderness (now Brooks, Pierce, McLendon, Humphrey & Leonard, LLP). He was also an active politician, author, and philanthropist.

Helen was born in Newark, New Jersey and Aubrey was born in Woodsdale, Person County near the North Carolina and Virginia state. Person County had a well-developed plantation economy during legalized enslavement, and as a young man Aubrey remembered that he “looked with admiration at the stately antebellum Georgian mansions in Virginia and North Carolina, and wistfully longed that I [he] might one day own one. My [his] ideal was Mount Vernon…”

The Brooks’ commissioned West Hartford, Connecticut architect A. Raymond Ellis to design their antebellum-style mansion. A native of Nova Scotia and educated at the Massachusetts Institute of Technology, Ellis began his practice in West Hartford in 1906. He gained notoriety for Period Revival residential designs through his position with Woman’s Home Companion magazine. Construction of the Brooks’ home, named Poplar Hall in recognition of the ancient Tulip Poplar in the front yard, began in 1913 and was completed the following year.

For his clients, Ellis designed a Neoclassical Revival composition including a full height Ionic portico topped by a Chippendale balustrade that sits in front of a two-story brick façade. The façade includes an impressive frontispiece composed of sidelights, transom, a balcony, and wrought ironwork. Ellis’ client, Aubrey Brooks, requested Mount Vernon as the inspiration for the design, though Poplar Hall’s details deviate from George Washington’s plantation residence in terms of classical references.

Ellis must have been pleased with the completed project for the plans and a photograph were published in the March 1915 issue of Architecture magazine [image, top]. Interior appointments are sumptuous, including a bifurcated staircase, Georgian Revival mantels, beamed ceilings, arched openings, and high wainscotting. The residence was expanded with additions to the east and the west in 1924.

“Stately antebellum” architecture was not a surprising choice for a Southern Democrat in the early twentieth century. In North Carolina the party embraced the narratives of the Old South promoted by Confederate sympathizers and actively sought to disenfranchise Black voters, exemplified by the Wilmington insurrection of 1898. As the Democratic Party under the leadership of President Franklin Delano Roosevelt courted Black voters in the 1930s, the Brooks’ remained committed to the party. Aubrey was a long-time friend of President Roosevelt, and he visited the President at his cottage in Warm Springs, GA. The First Lady, Eleanor Roosevelt, was a guest for three nights at the Poplars in November 1931.

Both Helen and Aubrey were supporters of women’s suffrage. Helen hosted events in support of the Suffragette Movement in Poplar Hall. In February 1922, the Brooks’ hosted a luncheon for the League of Women Voters in their home, including Maud Wood Park, the president of the League.

Later members of the Brooks family held notable roles in social and medical circles. Their youngest son Dr. James Taylor Brooks and his wife Dr. Jean Elizabeth Baily Brooks became the second owners of the house in 1977. The doctors married in 1948 and began practiced medicine together that same year. Dr. Jean Bailey Brooks was the first woman to graduate from Wake Forest Bowman Gray School of Medicine and was the first female OB-GYN in Greensboro. In 1985 the doctors Brooks established a scholarship fund at Bowman Gray Medical School in Winston-Salem to support young women and men in full-time academic medicine. The couple supported numerous philanthropic initiatives in the city.

Detailed information on this property courtesy of Samantha Smith of Gate City Preservation.