The Secrets of Irving Park 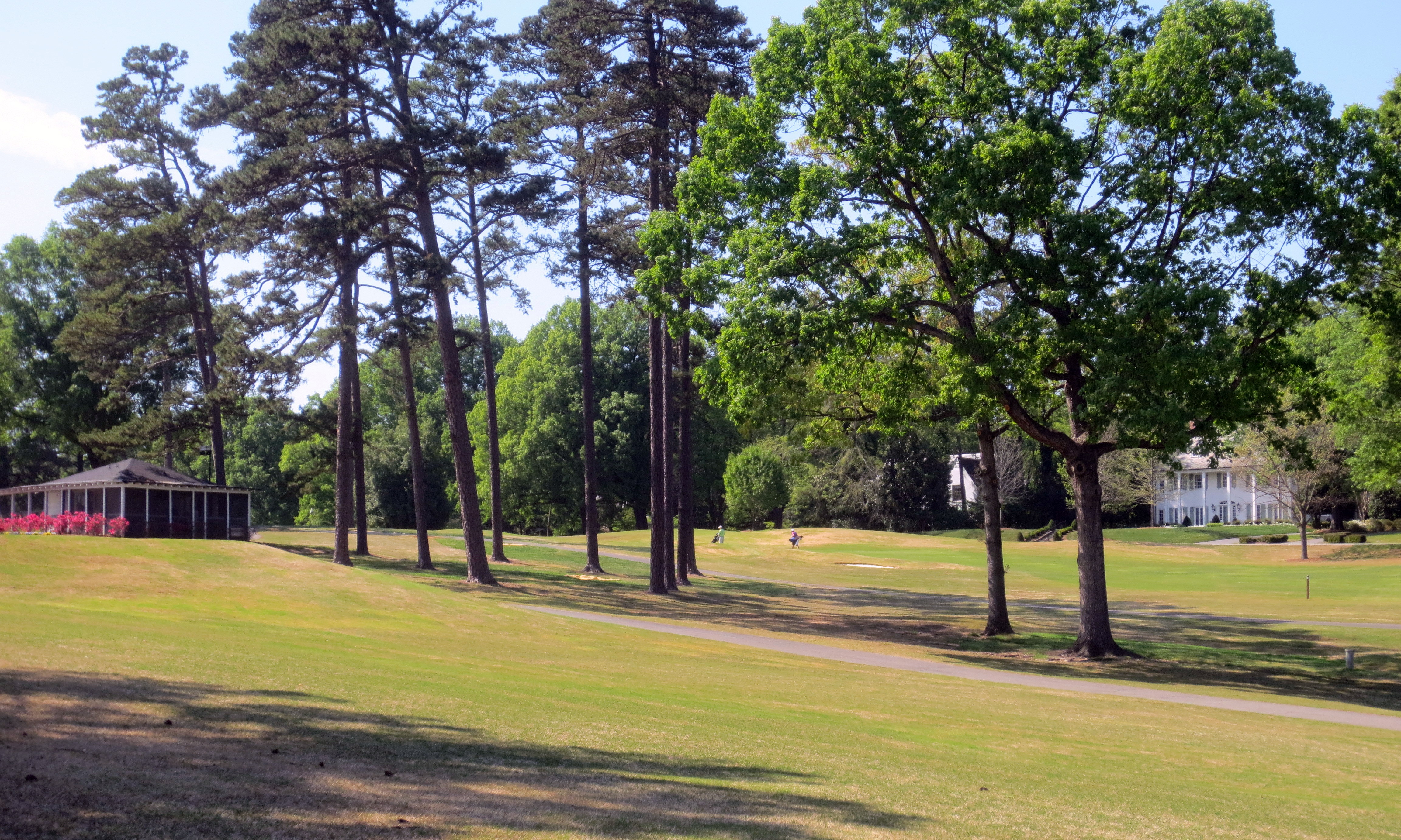 Irving Park is a North Carolina classic. It is home to US Ambassadors, Senators, Representatives, philanthropists, and captains of Fortune 500 companies. For Greensboro, it is the center of power and influence. It also likely features the earliest example in the state of a golf course that was integrated into a neighborhood plan, predating comparable neighborhoods such as Myers Park in Charlotte, Country Club Estates in Winston-Salem, and Hope Valley in Durham. The neighborhood features some of the best

examples of 20th Century architecture in the state, designed by regionally and nationally prominent architects including Charles Barton Keen, Mott Schmidt, and Greensboro’s own Charles Hartmann and Edward Loewenstein. In recognition of its significance, it was inscribed to the National Register of Historic Places in 1992.

Irving Park was born from the ideal that rural environs were superior to that of the city. This ideal tapped into evolving concepts of recreation, density, zoning, exclusivity, nature, and aesthetics. The result was the development of a planned, heavily restricted, and landscaped community that set a standard for suburban development in the Greensboro for the next century. Additionally, Irving Park was among the earliest communities in the region to integrate a recreational golf course into the plan of the neighborhood.

Irving Park was developed by the Southern Real Estate Company, a development agency of A.W. McAlister, R.G. Vaughan, and A.M. Scales. As early as 1903, Scales began to assemble land in the vicinity of Cleburne Street for use as a rural retreat. East of the Scales property, the McAdoo family owned 140 acres acquired around 1890. The McAdoo’s likely enjoyed the high prospect on which their land was perched and in February of 1912, Will D. McAdoo began work on “a handsome residence” now recognized as the McAdoo-Sanders-Tatum House at 303 Wentworth.

The Greensboro Country Club was incorporated In 1911 with the objective of promoting and encouraging “outdoor and athletic games and exercises, including golf, tennis, croquet, bowling, automobiling and all other forms of wholesome and healthful sports, games and amusements.” In addition to those activities, the club sought to encourage nearby development “for country homes and residences for its members and other persons.” The club purchased 109 acres of land from Scales family that year, and subscriptions for club memberships were promoted.

In April of 1911, club promoters announced that John Peacock had been contracted to lay-out the new golf course. Peacock was familiar with North Carolina as a winter resident of Pinehurst. He was reputed to be an expert in his line, having “laid off the grounds for a number of golfing clubs of importance in the country”  in addition to his charge as a superintendent of the Algonquin Golf Club in New Brunswick, Canada.

As the golf course was prepared, the first phase of the Irving Park subdivision was also laid out by Greensboro civil engineer William B. Trogdon. His phase included streets directly surrounding the course, including Country Club Drive, Carlisle Road, Sunset Drive, Briarcliff Road, and Meadowbrook Terrace, and most roads bordered fairways so that properties overlooked the course as a park space. Areas of the plan that were not adjacent to the course was designed with passve open space, such as “The Dale,” a small park between Edgedale and Allendale roads.

The first generation of homes was built by a group of rising legal and insurance professionals. In 1912, Junius Irving Scales, an attorney and the namesake of Irving Park, began a Colonial-style home at 309 Sunset Drive. R. Jesse Mebane, an automobile dealer, built a handsome Colonial residence at 405 Meadowbrook Terrace and Harry Bush, a vice-president of Dixie Fire Insurance Company, constructed his fine Colonial Revival home at 313 Sunset in

1912-13. Aubrey Brooks, the general counsel for the Jefferson Standard Life Insurance Company, had a grand Neoclassical Revival home named Poplar Hall that was begun in 1913 to plans provided by Hartford, Connecticut, architect A. Raymond Ellis (image, right). The clubhouse was completed in May 1912, the golf course opened in November of that same year, and the name “Irving Park” was selected in January 1913. This momentum led to the incorporation of the Irving Park Company in June 1914 as the development company that took over development from Scales and his Southern Real Estate Company.

The transition of ownership drove the second phase of development in 1914 when city planner John Nolen (1869-1937) was hired to enhance the landscape of the existing development scheme and to extend roads, parks, and developable lots west to Battleground Avenue. Nolen was a Philadelphia-born planner who apprenticed under Frederick Law Olmsted. Over the course of his career, Nolen participated in 400 public planning projects and works of landscape architecture. He had a direct hand in projects across North Carolina, including Independence Park, Myers Park, and Settler Cemetery in Charlotte; expansion plans for the University of North Carolina at Chapel Hill; and a city plan for Asheville.

Speculating on the success of the project,

the Irving Park Company constructed two homes on Country Club (today Irving Park) Place. The two “handsome seven-room residences” were designed by architects Keen and Barton, and were promised to be “thoroughly modern in every respect and in keeping with the surrounding residences”.

The third phase of development is defined by the work of landscape architect Robert A. Cridland (1877-1959). The Philadelphia- and Atlanta-based designer had previously been engaged by the Vanderbilts to rework their Hyde Park estate overlooking the Hudson River in New York. Cridland’s plan of 1916 for Irving Park added the area north of Irving Place and east of Granville Road. The tract had been owned by William McAdoo, who had initiated a plan for subdivision of property as early as 1913. Revisions to Nolen’s earlier plan included renaming of some streets, the replatting of some lots, and the design of Elmwood Park as a primary gateway from North Elm Street. Cridland wrote a highly influential book titled “Practical Landscape Gardening” that was published in 1916. He remained influential in public and private design projects from Atlanta to New England for the next several decades, including Hope Valley in Durham, Oak Hill Gardens at Berry College in Georgia, and the Hudson View Gardens in New York.

Irving Park’s original nine-hole golf course by John Peacock was a constant throughout all phases. The club hired Fred N. Newrham as its manager and he provided lessons for golfing neophytes. Between 1925 and 1930, the course grew to it’s current 18-hole form when it was re-designed by premier American golf course architect Donald J. Ross (1872–1948). Ross was born in Dornoch, Scotland, and he was involved in designing or redesigning around 400 courses from 1900 to 1948. Subsequent to the Ross redesign, a lake on the Number 13 fairway was built in 1932. With the exception of changes to holes 13, 16, and 18, the course continues to reflect Ross’s design.

The planning of the recreational amenities such as passive parks and recreational club activities positioned the neighborhood well for the Roaring Twenties, when Greensboro’s blue- and white-collar companies expanded rapidly. Residential commissions that remain standing in Irving Park include:

As Irving Park passes its centennial, pressures from real estate and twenty-first century lifestyles challenge the community. Smaller homes are threatened with destruction and replacement with overscaled residences. Additions to historic properties are not always sympathetic to the history and architecture of the community. Street parking remains a challenge on roads designed before automobiles grew popular. However, the neighborhood remains popular and attracts a high level of investment.

In May 2016, Preservation Greensboro held its Sixth Annual Tour of Historic Homes & Gardens in Irving Park. The celebration featured five vintage homes in the as part of National Historic Preservation Month. The tour highlighted stunning features of early twentieth-century architecture that include Irving Park’s oldest home and a Mid-Century Modern home. Participants gained insights into local history, horticulture, and design.The tour is the flagship fundraiser for Preservation Greensboro. For more information visit our tour webpage.