House With Distinguished Past Rounds Off Tour 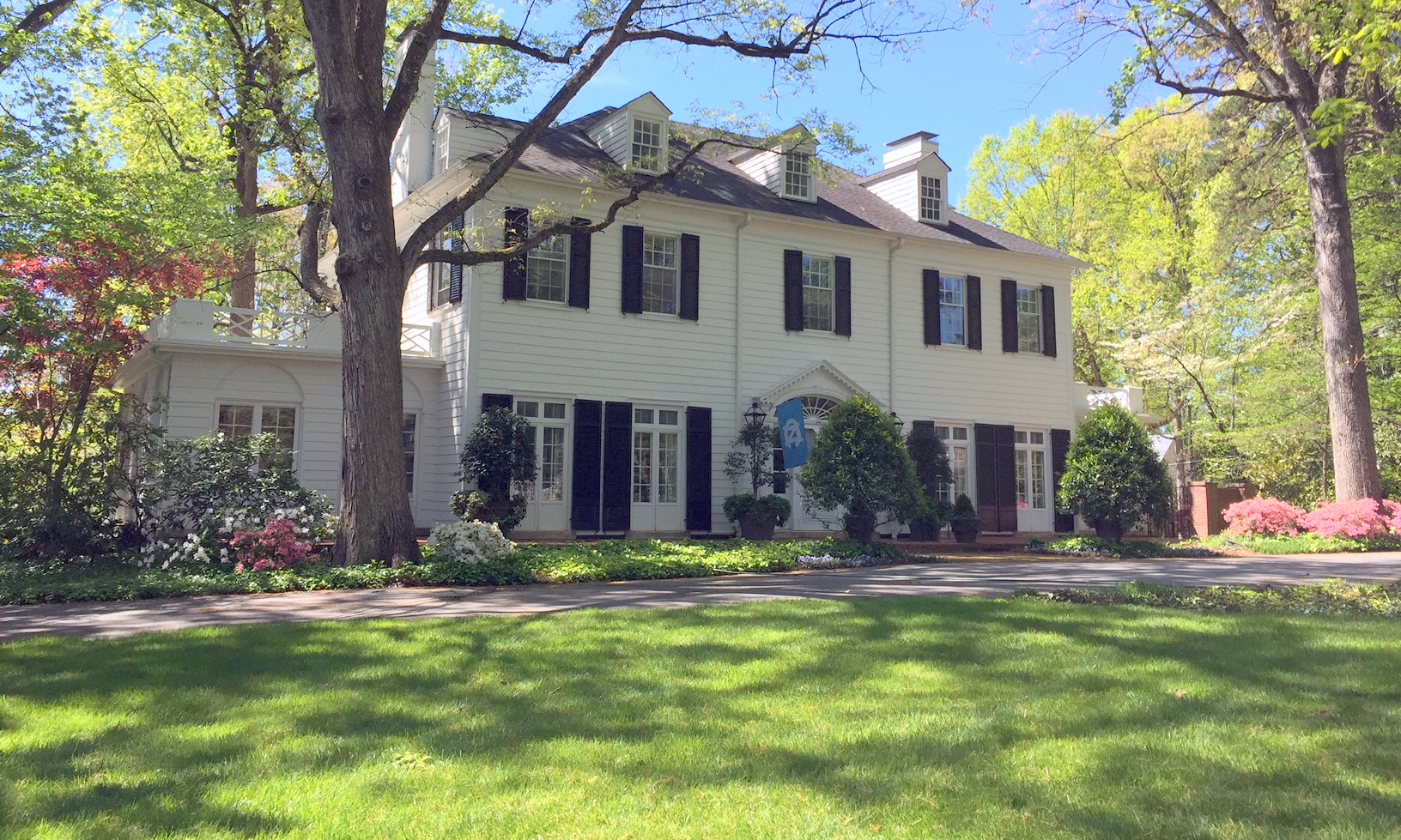 Clement Gillespie Wright (1864-1937) was a Greensboro native and descended from an old family. His great-grandfather Robert Lindsay was among the pioneers of Greensboro. In 1808 Lindsay bought a lot for $52 at the northeast corner of Market and Elm streets and built a store. In 1897, Wright married Mary Joanna “Josie” Bernard (1874-1954). Josie’s family had come to Greensboro from Norfolk, Virginia, when her father took a job as a railroad engineer in the 1880s. The couple had five children, but only Thomas Bernard and Annette Virginia survived childhood. Before their Irving Park home, the family lived in an ancient wood frame house on North Elm Street adjacent to the O. Henry Hotel, which Clement founded. The home they constructed at 105 Sunset Drive is one of the grand houses of Irving Park.

Wright was an attorney and real estate developer. He also served as a publisher through the Greensboro Publishing Company and president of Wright Hinge & Lock Company. He commissioned this grand Colonial Revival dwelling around 1919 and selected the prominent Philadelphia architect Charles Barton Keen to design it. Keen was actively overseeing a handful of other commissions in Irving Park at the time, and Wright’s choice was both pragmatic and ambitious.

The two-story wood-shingled house features a classical entrance with a segmental arch and pilasters. The symmetrical façade is topped by a hipped roof with three dormer windows; it is flanked by one-story side wings topped with balustrades. The 6,932 square-foot residence includes features consistent with Keen’s other designs, including French doors, Federal-era mantels, deep plaster cornices, and a grand staircase. The home contains a front-to-back living room, reception room, solarium, porch, dining room, and kitchen on the first floor. Eight bedrooms and five full baths are on the second and third floors. Remarkably, an oculus or “diffusing sash,” a type of round skylight, is found in the hallway above the stairs, one of only two known to exist in Guilford County.

By 1930, Josie and Clement held court over an extended family who shared their house. Their son, Thomas, and his wife, Mary, had two young boys, Thomas Junior and Clement II. Mary’s parents, Virginia and Thomas Bernard, and her sister Imogene moved into the home around 1925. In addition, four African American staff ranged in age from 17-year-old Lucille Jones to 58-year-old Mary Stevens. Ora Wade was the family’s cook, and Sylvester Donald maintained the mechanicals.

The Great Depression hit the Wright family very hard, and they left their home by 1931. The couple were living in the O. Henry Hotel when Clement died in 1937. In 1933, the house served briefly, perhaps through a lease, as the home of J. Spencer Love, founder and president of Burlington Mills Corporation. The company relocated its headquarters to the Gate City from Burlington in 1935.

The second family to enjoy a significant time in the house arrived around 1935. Wilbert James “Nick” Carter and his wife, Christine, purchased the property from mortgage-holder Pilot Life. Carter was an executive with Burlington Industries and likely moved to the city following Spencer Love. Nick and Christine were married in Burlington 1926. When they arrived at their new home on Sunset Drive, the family consisted of two daughters, Nancy and Dorothy, and soon added a son, Wilbert James Carter, Jr., nicknamed “Jim.” Their maid, Sally Martin, maintained her residence in the home with the family.

Carter and his brother, Harry, were natives of Wallace in Duplin County and graduates of the Textile School at North Carolina State College. He and his brother established Carter Fabrics Corporation in 1937. The company made a variety of fabrics, mostly rayon, nylon, and wool. The operation later merged with J.P. Stevens & Company, and by 1953 the combined company operated 38 textile plants in seven states, producing products ranging from sheer nylon to automotive upholstery. As they expanded their corporate interests, the brothers became major donors to N.C. State. The college awarded Nick Carter an honorary Doctor of Textile Science degree in 1943. In 1966 N.C. State named its new football field Carter Stadium in their honor (in 1979, it became Carter-Finley Stadium in recognition of Raleigh philanthropist A.E. Finley).

The Wright Residence was added to the National Register of Historic Places in 1995 as part of the Irving Park Historic District. The house has served as the residence of Debbie and Steve Vetter since 1990.

The house was opened to tours in 2016 as part of Preservation Greensboro’s 7th Annual Tour of Historic Homes & Gardens.