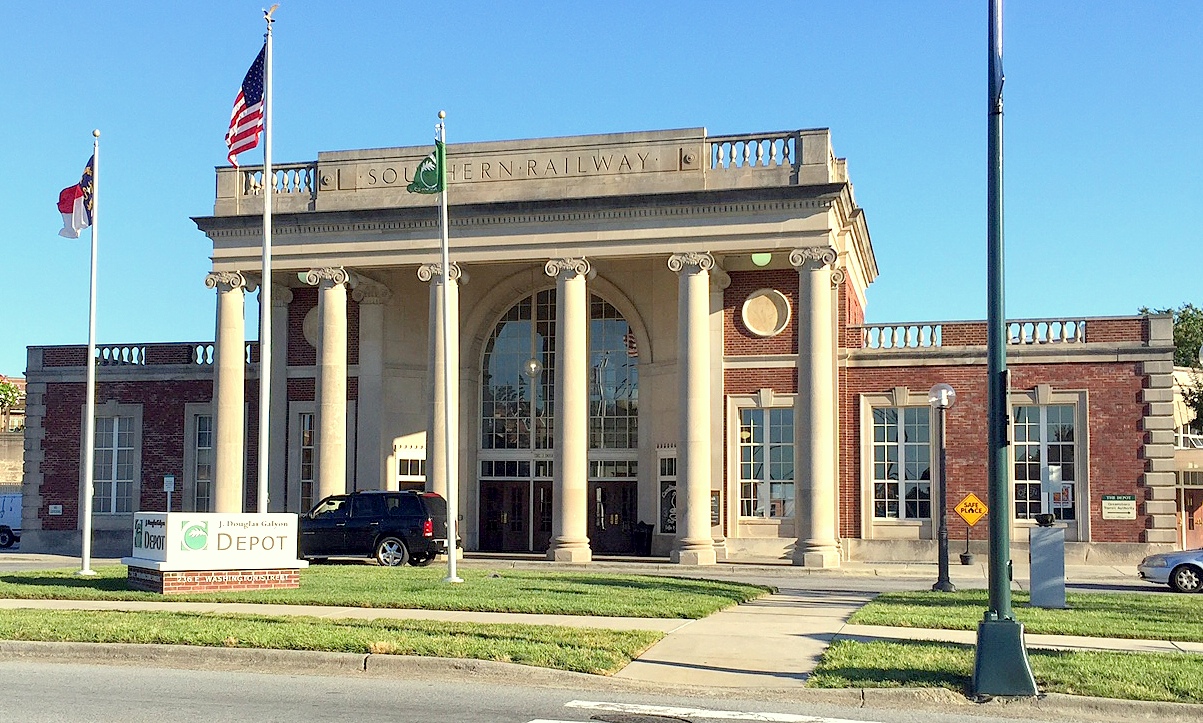 At the time of construction, Greensboro had outgrown the smaller passenger station on Elm Street. In gaining economic significance as an industrial rail hub, it was richly rewarded by Southern Railway with construction of the grandest railroad station in North Carolina. The Beaux-Arts façade features Ionic columns and a full entablature of Indiana Limestone that fronts a two-story glass arched entryway. To each side of the main portico are single story hyphens, detailed with quoins and keystones, and topped by a balustrade. To leave no doubt as to the patron of this grand building, across the parapet of the portico is boldly inscribed “Southern Railway”.

Inside, the ticketing area is lit from above by demilune clerestory windows. To the west is a bank of ticket windows and to the east is a large passenger waiting area. A mural depicting the service area of the Southern Railway system in the 1920s is set in a recessed arch above the entry to the under-track concourse by which passengers access a series platforms. Due to Jim Crow Laws at the time, the station initially had segregated waiting areas. African American patrons were required to enter the building from a side entrance. The 1927 “Colored Entrance” sign was acquired by the Greensboro Historical Museum in 2001 during station renovations and is currently part of their permanent display.

Newspapers across the state covered the completion of the structure, including this article from Stokes County on April 19th, 1927:

“Henry Miller, operating head of the [rail]road, is expected to be here tomorrow to join with members of the council in seeing the $1,000,000 [station] plant open its doors for the service which Greensboro has been desiring for many years. The station has been under construction for fourteen months by the Consolidated Engineering Company, Baltimore. Felheimer and Wagner, New York, are the architects.”

The grandest railroad station in North Carolina was designed by architects Alfred Fellheimer and Steward Wagner. The pair was well-known for railroad station designs over the course of their career, and were responsible for stations such as the Union Passenger Station in Macon, Ga. (1915); the New York Central Rail Road Buffalo Passenger Station (1927-1928); and the Cincinnati Terminal in Cincinnati, Ohio (1930-1931). Fellheimer was a native of Chicago and had been part of architectural firm responsible for Grand Central Station in New York. Wagner had an eye for for Beaux-Arts design. In Greensboro, Fellheimer and Wagner’s first project in the state was for the iconic Power Plant (1924) for present University of North Carolina at Greensboro. The towering structure was constructed in a bold Romanesque Revival design that was among the tallest buildings in the city.

Rail passenger service peaked in the 1940s, when more than 40 passenger trains passed through the station daily. Greensboro’s position as a statewide rail hub led to the the city’s nickname, the “Gate City”. Passenger service declined throughout the 1950s and 1960s, and the station was closed in May 1979. Remaining rail passengers were directed to a new but much smaller facility several miles west of downtown near Lindley Park. Unlike other historic depots across the state in Charlotte, Durham, and Raleigh, Greensboro’s historic station dodged demolition through Southern Railway’s donation of the facility to the city for adaptive reuse.  It was listed to the National Register of Historic Places in June 1982, and served a number of uses including a dance club and an architectural salvage initiated by Preservation Greensboro in 1993.

With the Intermodal Surface Transportation Efficiency Act of 1991 signed into federal law by President George H. W. Bush, the North Carolina Department of Transportation and City of Greensboro began developing plans to return passenger rail service to the station and integrate municipal transit service with a central city bus hub. The station was returned to passenger rail service in 2005 after a 20-year hiatus. The $32 million project was paid for through a partnership of Federal Transit Administration, Federal Highway Administration, state and city funds. Upon completion, the site was rechristened the Gaylon Transportation Center in honor of the Greensboro citizen who championed the project. It was recognized in 2004 by Preservation Greensboro with a Preservation Award at the organization’s annual meeting.

Today the station services eight passenger trains a day to New York, Washington, and New Orleans by way of the Crescent, and Charlotte, Raleigh Washington, and New York by way of the Carolinian/Piedmont. Annual ridership regularly falls into the third highest boarding/alightment statistics in the state. The Greensboro station generates ticket revenues of over $3 million annually.. Skift.com recognized the building as one of the 23 Grandest Amtrak Train Stations in America. In 2021, the station was declared one of the 14 most beautiful rail stations in America!