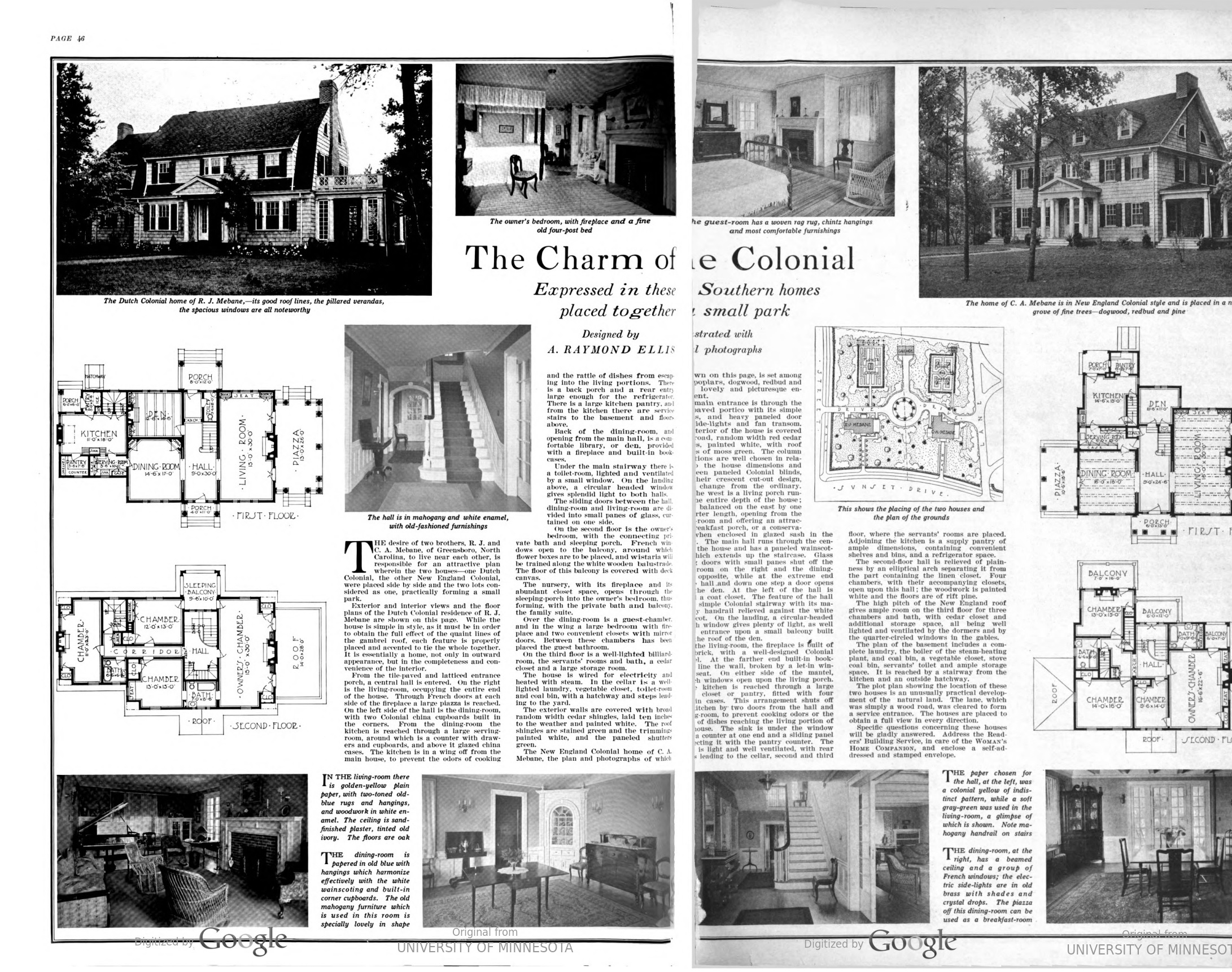 Long before television and social media reigned supreme as venues for the exchange of ideas, printed “shelter” and lifestyle magazines were the arbiters of fashionable trends among architects and influencers. These home-oriented publications peddled modern bathrooms, convenient kitchens, and trendy designs as American architect’s taste for decorative arts and style evolved.

Born in Nova Scotia, Ellis spent much of his youth in Boston where he attended the Architectural School of the Massachusetts Institute of Technology. Beginning in 1906, he practiced from his office in West Hartford, Connecticut where he specialized in Period Revival residential designs. He earned membership to the American Institute of Architects in 1916.

His firm designed houses for clients in Hartford where he penned a column in the Hartford Courant newspaper. As early as 1907 his work was published in the magazine Country Life in America and in the 1920s he contributed to Architecture, a professional monthly. His presence was most influential through his position with Woman’s Home Companion. The monthly magazine was published from 1873 to 1957. With an audience composed primarily of women, the magazine targeted their role in the planning and design of their homes.

Perhaps it was his national reputation through the magazine that brought him to Greensboro. In January 1914, the Greensboro Record newspaper quoted Ellis in an article related to construction costs in which the architect expressed familiarity of prices in North Carolina. In December 1914, Jessie and William Hewitt moved into their newly built residence at 100 Fisher Park Circle, a house documented by blueprints to be of Ellis’s design. Hewitt was from New York and perhaps he introduced the Connecticut architect to Greensboro. Considering the 10-month construction timeline for the house, Ellis was likely in Greensboro as early as January 1914.

In the spring of 1915, the Record newspaper reported that Ellis “spent a day or two in Greensboro…” alongside the well-regarded landscape architect John Nolen to observe and opine upon the Gate City’s newest subdivision, Irving Park. That year, it was reported that Ellis was commissioned to design a group of houses in Irving Park “immediately in front of the Country Club.”

Among this group of houses was the grand Neoclassical mansion of attorney Aubrey Brooks, but to the east of that property were located two residences that Ellis designed and sought to promote nationally through Woman’s Home Companion magazine. This pair of houses is composed of the Robert Jesse Mebane House located and 401 Sunset Drive and the Cummins Aiken Mebane House at 405 Sunset Drive.

The article, published in the 1915 April issue, illustrates houses that have already been built, decorated and landscaped, implying that construction of the residences began in 1914.

Ellis writes that “The desire of two brothers, R. J. and C. A. Mebane, of Greensboro, North Carolina, to live near each other, is responsible for an attractive plan wherein the two houses – one Dutch Colonial, the other New England Colonial, were placed side by side and the two lots considered as one, practically forming a small park.”

Ellis’s two clients were brothers of a family from Oxford, NC, but their father was an influential lawyer and judge originally from Madison, NC located 25 miles north of Greensboro. Their sister, Cora Galloway Mebane Rossell also lived in Irving Park in a house designed by architect Charles Barton Keen.

The Mebane brothers were not only heirs to a prosperous family but held positions within Greensboro’s growing white collar class in insurance and financial trades. At the time of construction, R. J. Mebane was Second Vice-president of North Carolina Trust Company, Third Vice-President and Assistant Manager of Southern Life & Trust Company, and Treasurer of Greensboro Securities Company. C. A. Mebane was Secretary of the Southern Stock Fire Insurance Company, Southern Underwriters of Greensboro, and Assistant manager of McAlister, Vaughn and Scales Insurance.

Sections of a digitized copy of the publication are obscured, but the descriptions of the R. Jesse Mebane house are detailed and legible. “Exterior and interior views and the floor plans of the Dutch Colonial residence of R. J. Mebane are shown on this page” Ellis states, “While the house is simple in style, as it must be in order to obtain the full effect of the quaint lines of the gambrel roof, each feature is properly placed and accented to tie the whole together. it is essentially a home, not only in outward appearance, but in the completeness and convenience of the interior.”

The article continues to describe room usage and amenities as well as some color selections. The full transcription is available below.

Greensboro contains several examples of nationally promoted architecture beginning with Alexander Jackson Davis’s Blandwood that was promoted in Andrew Downing’s A Treatise on the Theory and Practice of Landscape Gardening Adapted to North America (1844). These two Mebane houses continue that tradition of local examples of architecture that were publicized through national media as exemplary designs. The tradition continued through work by Charles Barton Keen and Edward Loewenstein well into the twentieth century. These examples are reminders of a time when Greensboro, prosperous from textile, insurance, banking, and tobacco industries, led the state in notable architectural commissions.

Woman’s Home Companion, Volume XLII, April, 1915, Number 4 “The Charm of the Colonial”
The desire of two brothers, R. J. and C. A. Mebane, of Greensboro, North Carolina, to live near each other, is responsible for an attractive plan wherein the two houses – one Dutch Colonial, the other New England Colonial, were placed side by side and the two lots considered as one, practically forming a small park.

Exterior and interior views and the floor plans of the Dutch Colonial residence of R. J. Mebane are shown on this page. While the house is simple in style, as it must be in order to obtain the full effect of the quaint lines of the gambrel roof, each feature is properly placed and accented to tie accented 2the whole together. it is essentially a home, not only in outward appearance, but in the completeness and convenience of the interior.

From the tile paved and latticed entrance porch, a central hall is entered. On the right is the living-room, occupying the entire end of the house. Through French doors at each side of the fireplace a large piazza is reached. On the left side of the hall is the dining-room, with two colonial China cupboards built in the corners. From the dining-room the kitchen is reached through a large serving-room, around which is a counter with drawers and cupboards, and above it glazed China cases. The kitchen is reached in a wing off from the main house, to prevent the odors of cooking and the rattle of dishes from escaping into the living portions. There is a back porch and a rear entry large enough for the refrigerator. There is a large kitchen pantry, and from the kitchen there are service stairs to the basement and floors above.

Back of the dining room, and opening from the main hall, is a comfortable library, or den, provided with a fireplace and built-in bookcases.

Under the main stairway there is a toilet-room, lighted and ventilated by a small window. On the landing above, a circular headed window gives splendid light to both halls.

The sliding doors between the hall, dining-room and living-room are divided into small panes of glass contained on one side.

On the second floor is the owner’s bedroom, with the connecting private bath and sleeping porch. French windows open to the balcony, around which flower boxes are to be placed, and wisteria will be trained along the white wooden ballast rod. The floor of this balcony is covered with deck canvas.

The nursery, with its fireplace and its abundant closet space, opens through the sleeping porch into the owner’s bedroom, thus forming, with the private bath and the balcony, the family suite.

Over the dining room is a guest-chamber, and in the wing a large bedroom with fireplace and two convenient closets. with mirror doors. Between these chambers has been placed the guest bathroom.

On the third floor is a well-lighted billiard room period the servants’ rooms and bath, a cedar closet and a large storage room.

The house is wired for electricity and heated with steam. In the cellar is a well-lighted laundry, vegetable closet, toilet room and coal bin, with a hatchway and steps leading to the yard.

The exterior walls are covered with broad random with cedar shingles, laid ten inches to the weather and painted white. The roof shingles are stained green and the trimmings painted white, and the paneled shutters green.

The New England Colonial home of C. A. Mebane, the plan and photographs of which are shown on this page, is set among …poplars, dogwood, redbud and …lovely and picturesque…[difficult to decipher from this point].