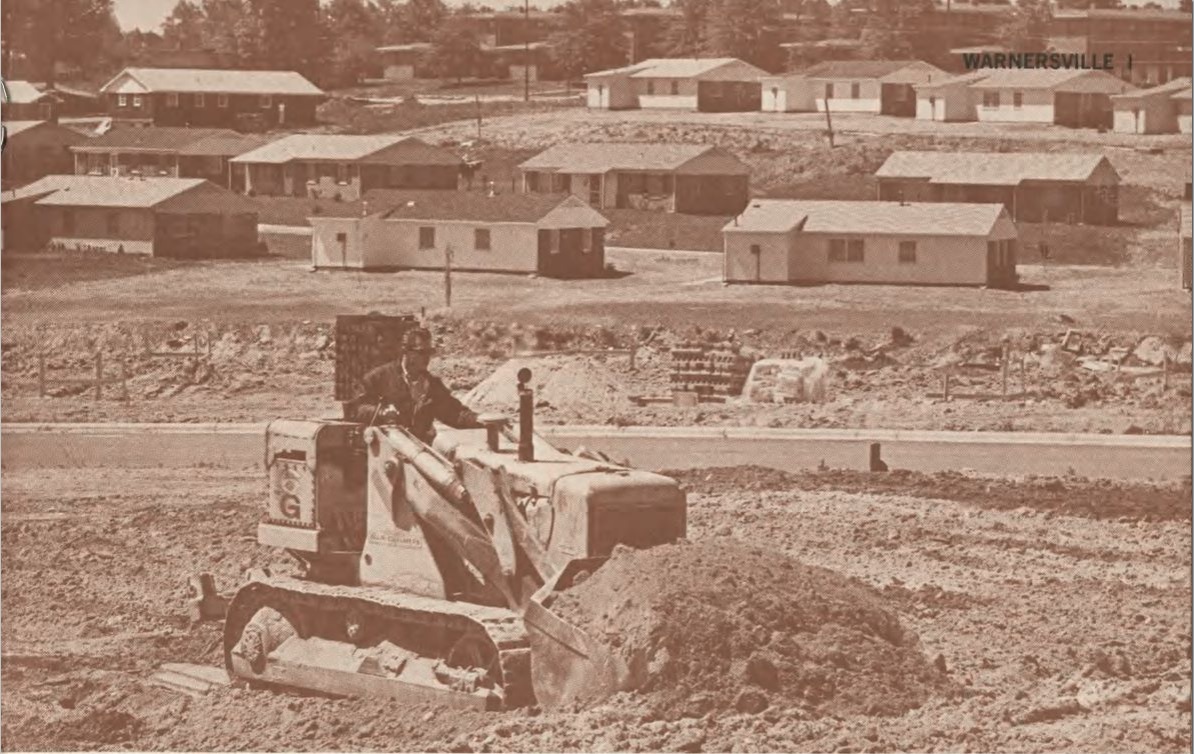 Anna-Kristina Hoffman, an Archaeology Major and Painting Minor at the University of North Carolina Greensboro, completed her 2022 internship with Preservation Greensboro by answering this basic question: How did the complete destruction of Greensboro’s historically Black Warnersville community in the 1960s effect the long-established social composition of the neighborhood? Further, was there any continuity among residents who perhaps returned after urban renewal?

Warnersville is a settlement established in December 1865 by Philadelphia Quakers “for the relief of Colored Freedmen” to facilitate Black property ownership on the southwestern edge of Greensboro. The original 34-acre tract was named in appreciation of the Quaker’s agent Yardley Warner and was managed and expanded by Harmon Unthank. A school was quickly established and one-acre lots were sold to facilitate self-sufficiency among Black families. The community prospered, and in 1889 an English Quaker named Henry Stanley Newman visited the settlement, reporting “I have today been to Warnersville, visited the coloured people in their own houses, examined their garden plots, seen their school-house and their church, and can bear testimony to the thriving character of their population. They number between 500 and 600 people, all coloured.”

Increasingly burdensome and repressive restrictions on Black citizens and their ownership of property caused Warnersville to grow dense with housing that was considered substandard by the 1950s. By the 1960s, the earliest buildings and roads in the community were approaching 100 years of age.

The “Warnersville Neighborhood Plan” developed by the Redevelopment Commission of Greensboro in 1961 estimated that of the 1,173 dwelling units in the neighborhood, 66.9% were substandard and that 59.9% of the streets were unpaved. The report opined “Extensive structural deterioration, lack of adequate living facilities, poor platting of streets and lots, and intermixture of incompatible land uses all indicate that drastic renewal is required to reverse blighting trend.”

To address these concerns, the City of Greensboro turned to federal subsidies provided through the Housing Act of 1954 to develop Warnersville. Greensboro was the first city in North Carolina to participate in federally subsidized urban renewal funding, and its first projects were the 83-acre Cumberland Project east of downtown, the 55-acre Retreat Street tract, and the 333-acre Warnersville neighborhood.

These federal funds were used to purchase privately owned property in Warnersville, often against the will of property owners. Nearly all structures and infrastructure were destroyed and regraded with new utilities to accommodate a new development that resembled contemporary suburban single-family tracts, garden apartments, churches, and parks. By 1974, a substantial portion of the reconstruction work was complete, and residents began to move into Warnersville’s new housing.

But were these the same people who were forcibly evicted from the first generation of housing? Did the historic Warnersville community retain it social composition? Did those with previous ties return to their neighborhood?

Hoffman sought to better understand this tumultuous period in American history through ground-breaking research exploring the impact the National Urban Renewal Project (URP) had on the social composition of the historically Black community. Her research began with an overview of historic Warnersville by using primary sources from pre-URP residents so she could gain a better understanding of the scope of work she would be investigating. Using a pre-URP map, she researched old city directories (or phone books) by order of street name alphabetically and recorded each resident living within the boundary of Warnersville during the years of 1949, 1959, and 1974. Early into this process, the data (names) already began to reveal historic Greensboro family names and lineages throughout the decades of Warnersville.

With help from the Greensboro History Museum’s Archivist Elise Allison, Hoffman was able to include oral history participants from earlier Warnersville research initiatives.

By the beginning of November, she completed the work of comparing the residents on spreadsheets alphabetized by last name to determine who lived in Warnersville in 1959 and 1974 and she identified sixty-eight people who returned to Warnersville post-URP. After this work was completed, she began creating a map with the help of Dr. Jeffery Patton and David Gwynn at UNCG using ArcGIS. She started by using the sixty-eight names to find their pre- and post-URP addresses in the spreadsheets created while working in the internship. She made a list of their names and addresses and standardized the data into addresses by house number, street name, city, and state then geocoding this information into ArcGIS pro. By the end of November, this work was complete, resulting in a fascinating geocoded map that represented where the people who returned to Warnersville lived post-Urban Renewal Project.

This project provides momentum for continued research. Hoffman hopes future work will result in an expanded map that covers the entirety of Warnersville and plot where every resident who returned had once lived pre-URP.

Hoffman’s research has convinced her that there is enough information and data to argue that Warnersville has maintained strong community ties that pre-date urban renewal that demonstrate that the neighborhoods social network survived in some form despite the destruction of the neighborhood’s built environment. Further, it is hoped that that the Warnersville story warrants recognition to the National Register of Historic Places through its social history and in recognition that its architecture has now matured past a 50-year-old threshold.

Though established at the end of the Civil War, the built environment (houses, churches, parks) of Warnersville no longer remains. This fact precipitated Greensboro’s first Heritage Community designation in 2015 as a way to honor the historic neighborhood that has few historic landmarks. However, Warnersville’s existing built environment now has crossed the 50-year-threshold for consideration to nomination to the National Register, and thanks to Anna-Kristina Hoffman’s groundbreaking research, historians can evaluate the narrative of the social history of the resilient residents who survived despite urban renewal.

Detailed information on this project was provided by Anna-Kristina Hoffman.