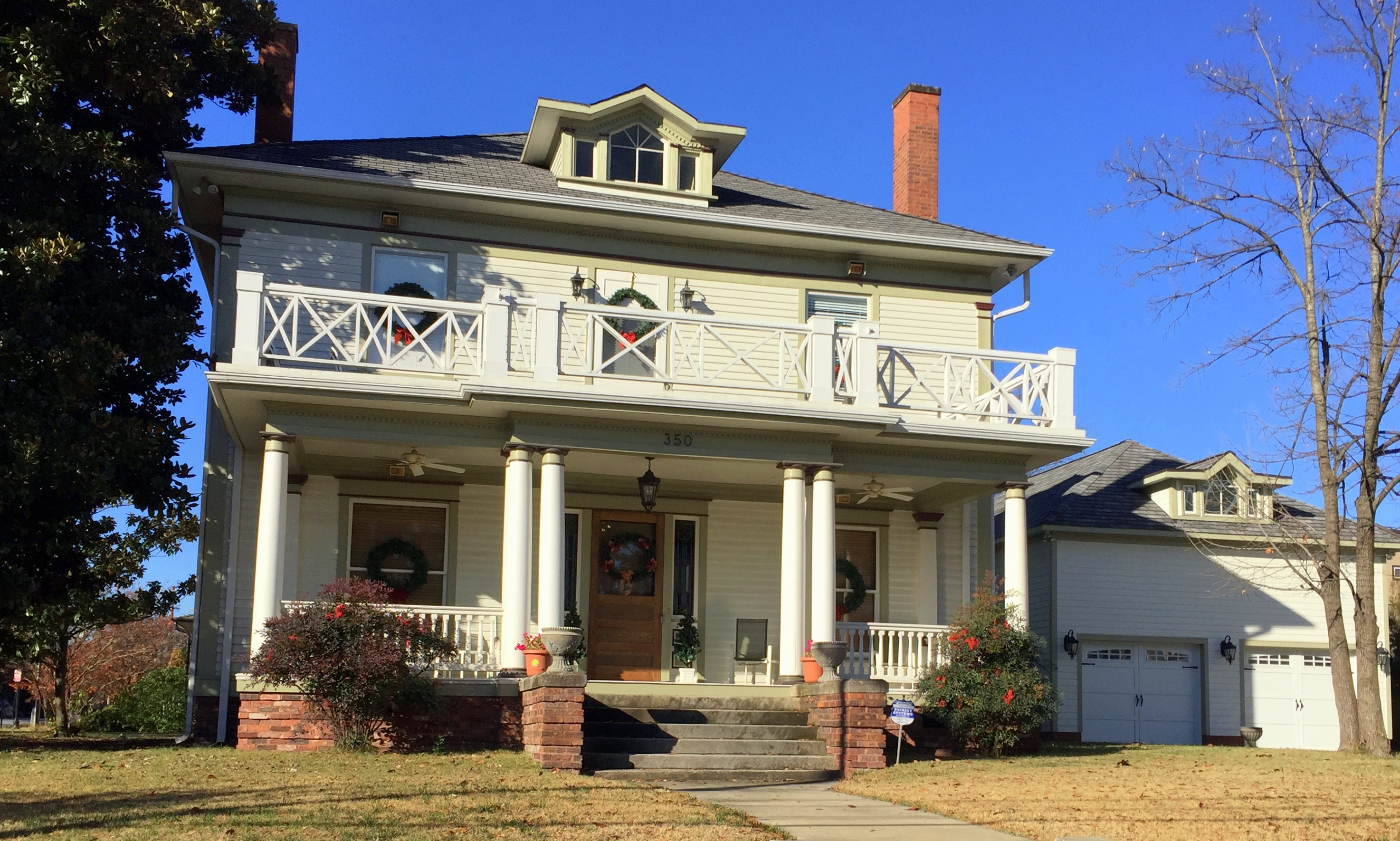 The Margaret and Calvin Nicks McAdoo House at 350 McAdoo Street in Greensboro’s Southside neighborhood has seen both fortune and tragedy since it was constructed in 1903.

Calvin Nicks McAdoo (1876-1905) was the youngest of three sons by Nannie Witcher Jones and Victor Clay McAdoo. Nannie was from Bachelors Hall in Pittsylvania County, Virginia and a descendant of Captain William Witcher of the American Revolution. Victor was son of Calvin Nicks McAdoo (1809-1887), and descended from an old Scotch-Irish family of Guilford County associated with Alamance Presbyterian Church. As a merchant and founder of the Greensboro National Bank, Nannie and Victor were recognized as one of the wealthiest families in the county.

The McAdoo family’s esteemed position in Greensboro was manifested in the construction of a fine house located on today’s McAdoo Street at a location very close to the current municipal water tower sporting Bennett College. Tragically, Victor McAdoo died in 1878 at the age of 31 years old of a bronchial affection. Nannie took over management of the family dry goods business before she remarried attorney Robert Ruffin King in 1888. This blended McAdoo-King family resulted in the birth of one son, Robert Jr. The family remained in the old McAdoo family home on today’s McAdoo Street.

Young Calvin was given his grandfather’s name, and like his namesake, he was quick to establish himself in Greensboro’s social and business circles. As early as 20 years of age, he acquired a telephone exchange in Salisbury (1895). He also ventured into real estate with his older brother under McAdoo Bros., Real Estate and Loans (1895). The family was sagacious – later selling their Greensboro Telephone Exchange to Bell Telephone Company for a handsome profit in 1903.

He took an interest in civic affairs, contributing to the Greensboro Public Library (1898), the Anti-Dispensary League (1900), the Central Carolina Fair (1900), and the Merchants and Manufacturers Association (1900). Historian Sallie Walker Stockard wrote of the family in 1902: “No McAdoo ever failed in business, or failed to pay a debt, or to make money. The McAdoos love real estate and know how to hold on to it. The genuine McAdoo has no fibre of stinginess in him, but ‘you can’t hoodoo a McAdoo.'”

In between business and civic promotions, McAdoo was introduced to Margaret Breard (1874-1956) of Monroe, Louisiana. The couple was married in the Breard home on 28 May 1902. The Times of Shreveport reported, “Mrs. McAdoo since her debut, has been recognized as one of Monroe’s most cultivated and refined belles. She possesses an exquisite voice and is a musician of fine attainments.” The couple took their honeymoon at Sapphire Valley, NC before returning to Greensboro in June to stay with Calvin’s mother. They didn’t remain under Mrs. McAdoo King’s roof long, taking most of the summer to explore resorts in western Virginia and North Carolina before returning to Greensboro with the autumn chill.

The Greensboro Patriot reported on 25 February 1903 that “Mr. and Mrs. C. N. McAdoo have gone to housekeeping at the corner of King and Gorrell streets,” indicating they moved into their new home at that time. Due to the blended McAdoo and King families, the street on which they lived alternated names. Today it is known as McAdoo Street.

The house at 350 McAdoo Street most closely relates to a housing style known as “The Classic Box” in other cities, particularly in Denver, San Francisco, and Seattle. The standard Classic Box grew popular after the World’s Colombian Exhibition of 1893, and takes the form of a two story dwelling with a square “box” façade that is topped with a hipped roof and features a central dormer. Stylistically, the Classic Box was adorned with classical architectural motifs such as columns, volutes, and pilasters. Around 1910 the Classic Box blended Prairie style features to a create a new boxy form known as the American Foursquare.

The classical features of the McAdoo House would have turned heads in 1903. Sophisticated details included the raised brick courses in the foundation that resonated with classical architecture, Tuscan porch supports, corner pilasters, a dentil cornice, and the three-part Palladian-style window with a pointed arch in the central dormer. The roofline is topped by an unusual roof cap featuring volutes.

Interior features are equally sumptuous, including classically-inspired mantels and trim of quarter-sawn oak, beamed ceilings in the parlor, study, and dining room, prolific use of beveled leaded glass windows, and a grand archway over the gracefully curved stairs. The house features an open floor plan that is conveniently arranged for entertaining. Understandably proud of their house, the McAdoo’s etched the initials “C N M” on the glass of the front door.

The design of the building is attributed to architect Frank A. Weston. Weston was a native of Rome, NY who lived in Denver and Colorado Springs, CO before relocating to Greensboro in 1903. In 1906, he listed Mrs. C. N. McAdoo’s “new residence” as part of his portfolio of work, referencing its frame construction and $7,000 price tag. As the McAdoo family held no other address in the city after 1903, it is assumed the house three-year-old house was still considered to be new.

Margaret and Calvin enjoyed newlywed life in their grand new home. The Greensboro Patriot reported McAdoo skyrocketing career as he took a position on the New York Cotton Exchange and the Chicago Board of Trade. He was elected to the New Orleans Cotton Exchange in 1903. In 1904, their daughter Margaret Breard McAdoo, was born. Calvin took a position as the fiscal agent for The North-Mexican Development Company in El Paso TX, selling mineral rights in New Mexico.

In 1904 the couple embarked on their grandest project – the McAdoo Office Building on South Elm Street. Towering five stories above the adjacent Federal Courthouse, the curiously narrow building (only 25 feet wide) took its place among the tallest in the growing town. This mini-skyscraper was, like their home, designed by Frank Weston. Raised brick rays like those seen on the McAdoo House foundation emanate from the first floor of the building. The structure was reduced to two stories in later years.

Tragedy struck the family in the summer of 1905, when Calvin was taken ill while visiting Reading, PA. In spite of a health regimen that included taking in the high and dry air of Asheville, he passed away in September of that year of typhoid fever. He was almost 30 years old.

Following the death of her husband, Margaret and her daughter remained in the family home on McAdoo Street.  An article in the Greensboro Daily News in June 1907 reported that Satchie Breard, Margaret’s sister, was staying in the family home at Gorrell and McAdoo. Just beneath the entry was a reference that G. M. Hawks [sic], of Vermont, a “muralist decorator of national reputation” was visiting the city on a pleasure trip. Margaret and George Hawk of Bennington, Vermont, were married in Oct 1907, in Washington, D.C.

Margaret Hawk maintained the house as a rental property until 1918 when it was sold to Margaret Douglas. The house was folded back into the McAdoo family by way of Calvin’s brother, Victor, but was lost due to foreclose in 1931. It was owned by Greensboro Bank and Trust Company and Norman Blocker through the Great Depression. During this time, the house was rented by the Douglas family, who endured the 1936 Greensboro Tornado that destroyed many homes surrounding the McAdoo House. Ella Allred, of Allred Printing, owned and occupied the house from 1936 until it was sold to Lola and Jacob Spease in 1962. By that time, the neighborhood around the McAdoo House was evolving from a primarily white and upper income neighborhood to a diverse community with a blend of owner-occupied and income properties.

During the Civil Rights Era, the Speases owned and occupied the house during a period that saw disinvestment and loss of many architectural resources along nearby streets. Initially they used the house as a location for their tailoring and antique business, but eventually they kept residence in the home as well. Lola and “Spease” were natives of Murfreesboro and Tobaccoville, respectively. The pair met while attending North Carolina A&T State University and were engaged in many civic activities during their ownership of the house – supporting various community organizations and renting rooms to university students.

In 2004, after more than 40 years of ownership, the Speases sold the house to their Goddaughter Lori Ann Harris. She adopted their role as a steward of the historic house by commencing a major restoration that retained the oak trim and architectural detail. The project was recognized in 2008 by Preservation Greensboro through a Preservation Award.

The McAdoo House was listed to the National Register as a contributing structure in the South Greensboro Historic District of 1991. There, it is listed as the T. B. Waddell House, an error brought on by the reassignment of street numbers early in the history of the home.

Special thanks to Lori Ann Harris for history related to this house.