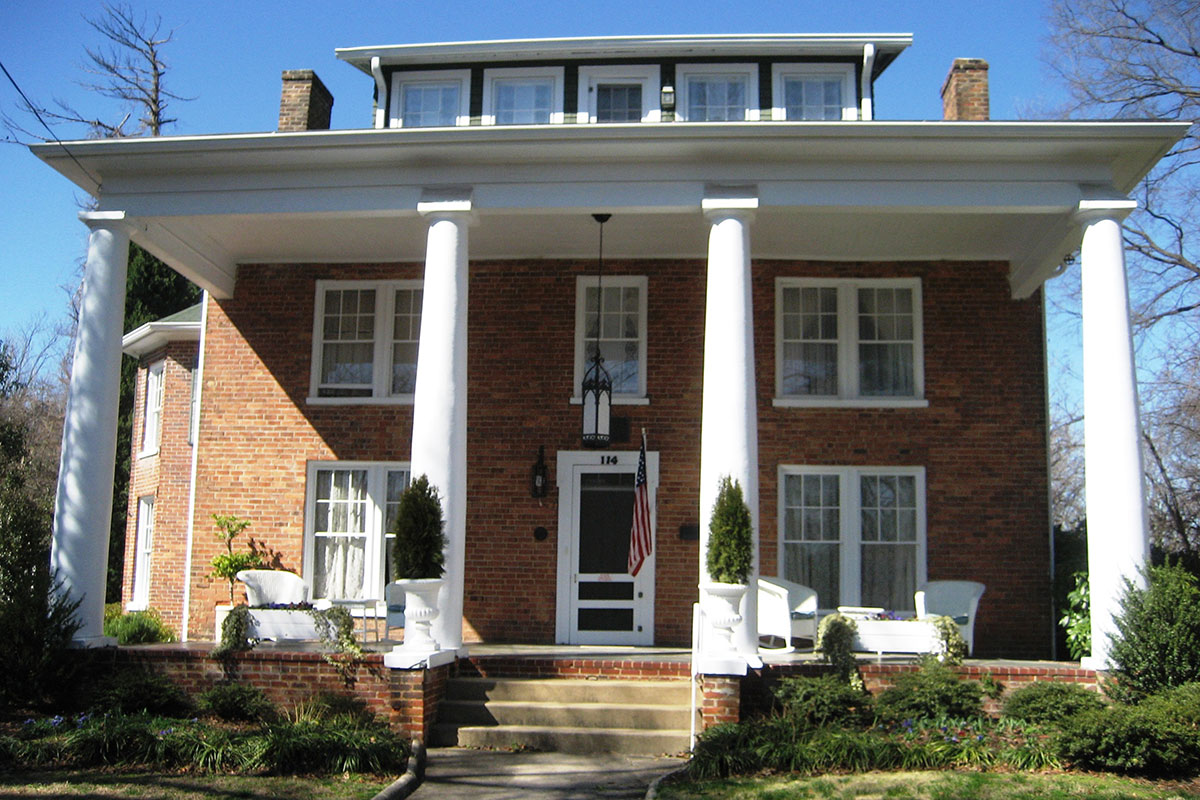 This house was saved by the Fund in 1992

Located on a high wooded lot overlooking the street, the Bumpass-Troy House is one of the three oldest houses in the neighborhood. The home is also one of a small number of Greek Revival residences in Greensboro, illustrated by the use of Greek-inspired trim featuring “ears” around the main entry, boxed cornice, and a grand full-height portico of Doric columns that was apparently shifted forward during a 1911 renovation to expand the width of the front porch. Erected in 1847, the original single-pile, center-hall brick house was constructed for Sidney and Frances Bumpass. Bumpass was an accomplished Methodist minister and trustee of the nearby Greensborough Female College (today Greensboro College) who began a Christian newspaper known as The Weekly. Though Bumpass died prematurely in 1851, his wife continued publishing the newspaper from the home for twenty years. The Bumpass home was featured prominently in reports from soldiers who visited Greensboro in 1865, where the family “…entertained us in royal style…and invited us in the dining room where a nice lunch was spread, with hot coffee.”

The house remained in the family through eldest daughter Duella Bumpass’ line. She married Captain Robert Roy and raised a large family including Allah, Lota, Melvil, Nina, Eugene, Arthur, and Ethel. Ethel maintained ownership of the property until her death in 1975.

By 1989, the eleven-room house with seven fireplaces was suffering from neglect after having been used for student apartments. In 1992, Preservation Greensboro Incorporated helped save the Bumpass-Troy House from destruction by purchasing the house and placing preservation easements on the property. The easements, which preclude major alterations to the interior and exterior without consultation with the organization, continue with the deed in perpetuity. Gwendolyn and Charles Brown bought the property and completed a major restoration, converting the home to a bed and breakfast inn. Subsequent owners Andrea and John Wimmer managed the inn through 2011, and later owners Judy and Larry Horn operated the house as the Troy-Bumpas Inn Bed & Breakfast.

In 2013 the house was opened as part of Preservation Greensboro’s Third Annual Tour of Historic Homes & Gardens in College Hill.

A Preservation Easement is a legal agreement between a property owner and the Preservation Greensboro Development Fund that protects the Bumpass-Troy House as a significant historic and cultural resource in perpetuity. Preservation easements are recognized as the strongest and only perpetual protection available for historic properties. The donation of a preservation easement by Humphrey is a commitment to the permanent protection of the significant historic property. Since the easement is attached to the deed, it binds future owners of the property as well.

“The Bumpass-Troy House has long been celebrated as one of the early landmark places in Greensboro,” says Benjamin Briggs of Preservation Greensboro, “because of its associations with the Bumpass family and its iconic portico. Even in the 1920s, city newspapers profiled the house and its history.”

Preservation Greensboro established its revolving fund as a charitable holder of easements in 1988.