Irving Park Looks to its Future 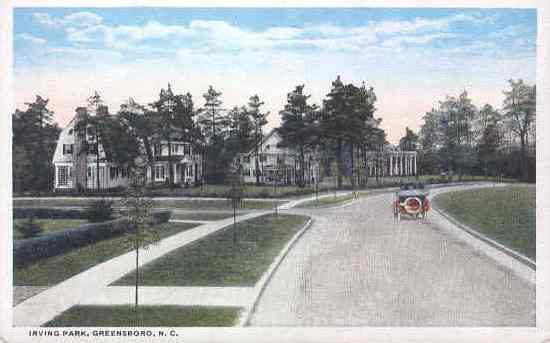 Is Irving Park to remain a neighborhood of lawns shaded by mature trees and classical homes with unusual architectural detail, or will it simply evolve into a collection of newly built McMansions attached to prestigious street addresses?

This is the question that will be discussed by Irving Park residents on Thursday evening, November 1st at 7:00 pm, First Presbyterian Church on North Elm Street.

One tool that is available for Irving Park residents to guide change in their neighborhood is the Neighborhood Conservation Overlay district, or NCO. Use of the NCO was recently approved by City Council, and its use is being explored by a number of neighborhoods across Greensboro.

In Irving Park, a major concern seems to revolve around the practice of “teardowns” or the purchase of smaller homes and large lots that are scraped clear of structures and vegetation, to be replaced by new construction that often maximizes the lot (right). This often results in large residences, or multiple residences, that sit very close to neighboring property lines and appear out of scale compared to established houses.

According to the National Trust for Historic Places, teardowns can have a strongly negative impact on neighborhood property values. Throughout the nation, teardowns often destroy older homes that are part of a community’s character; the very character that drew residents to the neighborhood in the first place.

But teardowns can go further than destroying visual charm and character, as seen in this 1920s postcard of the neighborhood (lower right). Long-time Irving Park residents know that its diverse scale of house-size encourages a range of residents enjoying different chapters of their lives. Newlyweds need starter homes, then move to a larger house to raise a family, and return to a smaller home after retirement. Irving Park historically contained this full range of housing scales, but recent destruction of smaller homes is reducing that choice. Many new houses tip the scales at the larger side of the spectrum.

Teardowns can also result in negative economic impacts. Some real estate agents observe that properties purchased as teardown candidates are valued only for their land. Under normal circumstances, the value of the land is in addition to the value of a house and other improvements. Once the value of an old house is perceived to be less than that of the land it is built on, the house’s days are probably numbered.

For the Irving Park neighborhood, this information session will provide an opportunity for city staff to answer general questions planning tools such as NCO’s, including the process for creating an NCO district, possible areas of coverage, and the neighborhood’s ability to define and customize the guidelines for change. NCO’s are clearly not historic districts that focus on historic details; rather, the overlay district could help guide new construction projects throughout Irving Park such as additions, infill on unbuilt land, as well as teardowns. The future appearance of Irving Park is in the hands of its residents.

For more information on NCO’s, you may visit the city’s website.