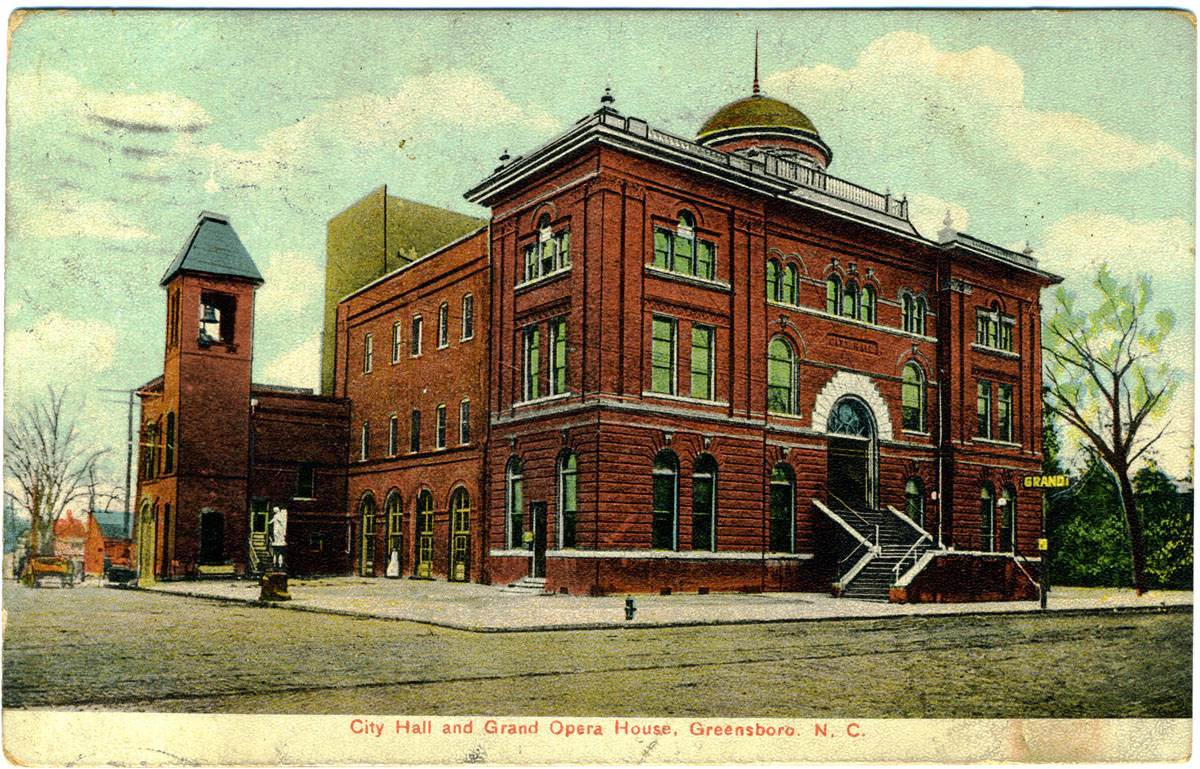 We are an old city full of old places, and old places often feature ghosts. With Halloween on our minds this week, I have been asked to give the inside scoop on some of downtown Greensboro’s spooky spots.

First Presbyterian Burial Ground
One of downtown Greensboro’s eeriest spots is the First Presbyterian Burial Ground behind the Greensboro Historical Museum. The cemetery has a remarkable collection of funerary art that spans a period of American ranging from the utilitarian stones marked by the angel of death to deeply symbolic stones that depict the tragedy of life. In this single cemetery, stones typical of the colonial period, the romantic period, and the twentieth century can be seen within four acres.

Symbolism runs rampant in this cemetery; a virtual smorgasbord of Victorian Era dogma related to death. The autumn issue of Preservation Greensboro’s membership magazine Landmarks (above right) reviews this symbolism, ranging from the depiction of animals (lambs and birds) to hands, books, scrolls, flowers, urns, and even butterflies. Though a cemetery might not be your idea of a great hangout for an afternoon of fun, exploring the sculpture of this burial ground could keep you entertained for hours.

Blandwood Mansion
The former Governor’s home on West Washington Street is another famous haunt. Serving as Preservation Greensboro’s main office, the mansion has its share of unexplained occurrences. No, its nothing horrifying…but there are certainly footsteps in the halls, and occasional missing items such as pens and paperclips that are definitely there one minute, and gone the next…only to reappear moments later. The footsteps are those of a man, and he has yet to be identified. The playful games of hide and seek are often attributed to Letitia, the eldest daughter of John and Ann Eliza Morehead and Lady of the House during the Civil War. Blandwood is a fine old house, and we love our resident ghosts(s)!

Center Pointe
An interesting chapter of Greensboro’s history was unearthed by Greensboro News and Record writer Jim Schlosser, who wrote about Greensboro’s last execution on Halloween in 2005. According the Schlosser, a series of executions were held inside the Guilford County jail, beginning in the 1890s. Schlosser’s research found that Guilford’s last jailhouse execution in 1907 was that of a black man, Frank Bohannon. Hangings were public spectacles in those days, and incited morbid curiosity as hundreds of onlookers who would gather outside the jail to be close to the execution. After 1907, executions were held in Raleigh in Central Prison. You can read more about this story here. The county jail was located on the land adjacent to the old City Hall – on the northwest corner of North Elm Street and West Friendly Avenue, at the present location of Center Pointe condos project.

The Southern Railway Depot
The last spooky spot in downtown Greensboro is featured on a Youtube video posted in July. The premise of the video is that the Depot is cursed by ghosts, shadows, and unexplained events. Especially effective are the personal accounts of experiences with the hauntings, coupled with recordings of a ghostly voice. If you find yourself visiting the depot, don’t worry, the video is fictitious and done in the spirit of fun.

Other stories are profiled in this week’s issue of 99 Blocks Magazine, including tales of the Carolina Theater and McCoul’s Public House. Ghost stories are important to us all because they blend folklore, literature, culture, architecture, and drama. Stories document our shared community history, and provide depth and dimension to the community we call home. Maybe someone needs to sit down and document all these great ghost stories for the future. Future publication idea?