The Willow Oak on the South Lawn at Blandwood 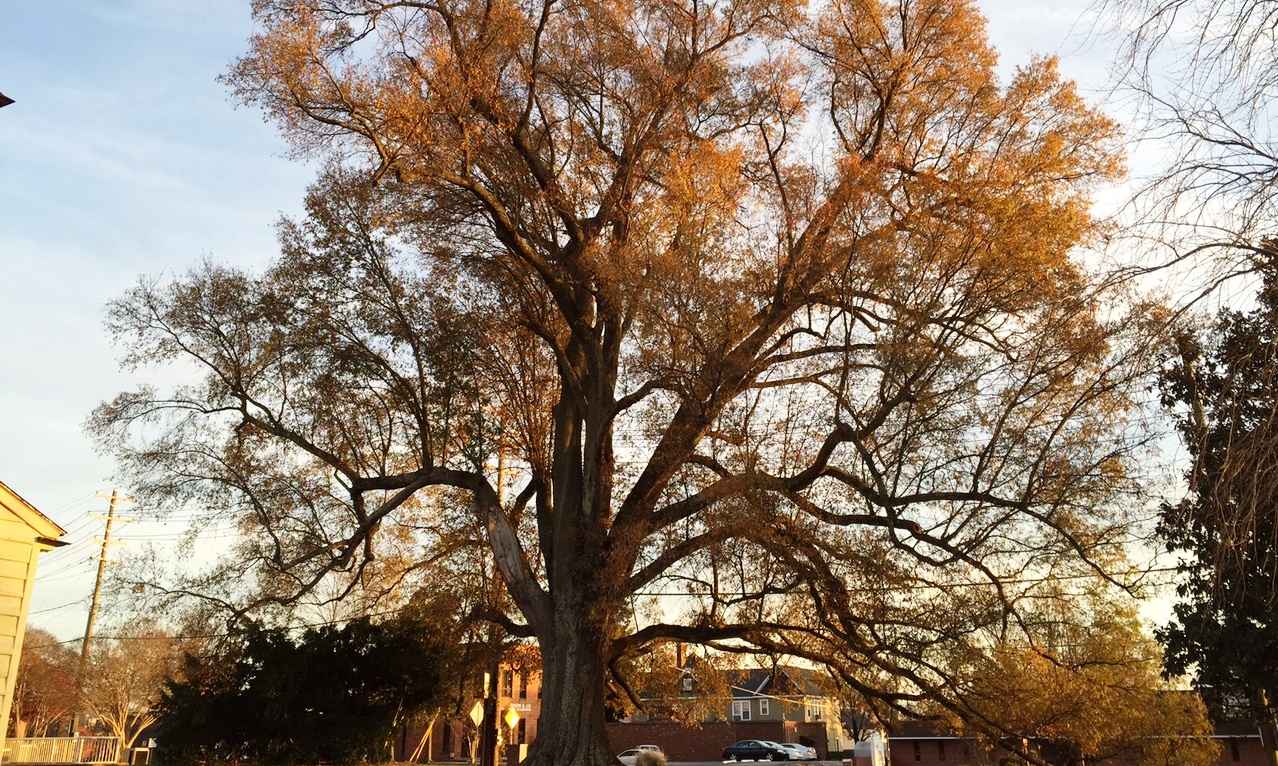 The Willow Oak tree on the South Lawn of Blandwood has graced the grounds for over a century, and has hosted countless weddings, picnics, and energetic children during that time. A large crack was revealed in 2015, leading to closer inspection. The review showed other alarming factors such as occulsion and interior rot that further threatened the stability of the tree. The Board of Trustees relectantly approved removal in December 2015.

The oak was likely planted after the time in which the Gray family lived in Blandwood. Emma Morehead Gray and her husband, Julius, lived at Blandwood Mansion, from 1874-1896. Emma was a daughter of Governor John Motley Morehead, and she acquired the home from her younger brother Eugene Morehead. An aero view of Greensboro made in 1891 (image, right) shows an orchard in the location of the oak. Family heirs sold the land surrounding Blandwood in 1905, and it is likely that the orchard was destroyed to make way for McGee Street. It is likely the oak was planted around this time.

Alexander Jackson Downing, (1815 – 1852) was an American landscape designer, horticulturalist, and writer, who featured Blandwood and its landscape in his second edition publication of A Treatise on the Theory and Practice of Landscape Gardening, Adapted to North America. Of the willow oak, he wrote: This remarkable species of oak may be recognised at once by its narrow, entire leaves, shaped almost like those of the willow, and about the same size, though thicker in texture. It is not found wild north of New Jersey, where it grows plentifully, but thrives well in cultivation much further north. The stem of this tree is remarkably smooth in every stage of its growth. It is so different in appearance and character from other species of this genus, that in plantations it would never be recognized by a person not conversant with oaks, as one of the family. It deserves to be introduced into landscapes for its singularity as an oak, and its lightness and elegance of foliage individually.”

Willow Oaks are frequently planted along streets and in parks and golf courses because of its size, rounded appearance, and relatively fast growth. Trees sometimes reach over 100 feet tall with trucks over 6 feet in diameter.  Rarely, they reach 100 years in age.

The Blandwood oak grew rapidly in the 1960s and 1970s. Images from the period show the growing prominence of the tree on the landscape decade by decade. After the Blandwood site was restored as a museum, and the nearby Carriage House special events center was opened in 1969, the tree received special attention as the location of weddings and picnics. Through the years, children have tested their balance as they carefully stepped along low-hanging limbs. Others have played on the roots of the massive 18-foot diameter trunk.

In the winter of 2014, a severe ice storm caused the collapse of several major limbs of the tree, and efforts were directed at stabilization of the remaining character-defining limb structure. However, routine maintenance of tree in the fall of 2015 revealed a troubling feature: a deep crack that sliced through the entire trunk that threatened collapse of a large complex of limbs into nearby McGee Street.  With further inspection by City of Greensboro Arborist Judson Clinton, Keith Francies from Davey Tree, and Scott Wyatt from Davey Tree, additional features of the tree caused alarm. An area of decay in the trunk was causing wood to rot deep inside the core, and an occlusion was causing two primary leads to grow against each other, forcing additional cracking and structural loss. Any approach for repairs to the tree would include dramatic pruning to reduce the weight of the tree’s structure, along with a great deal of cabling. The tree would look much different after this effort, and would be peppered with large cuts. Aside from the high cost of this work, arborists could not guarantee the survival of the tree in future wind or ice events, or long term damage from large cuts.

In December 8, the Preservation Greensboro board of trustees reluctantly concluded that the landmark tree was too dangerous to remain standing so close the McGee Street and its sidewalk. The street passes under the area in which the tree is most vulnerable to further cracking. The tree will be carefully removed over a period of several days, taking into consideration nearby roads, power lines, and the 220-year-old Blandwood Mansion that is just 40 feet away. Long-term plans for replanting in the area are being developed, with opportunities to replace portions of the historic orchard that stood in the location in the nineteenth century.

Those who would like to contribute to the continued care and stewardship of new trees, or existing trees at Blandwood may do so by making a contribution in honor of “Blandwood’s Landmark Trees”. Funds raised will be devoted to careful pruning of future signature trees such as red maples, white oaks, and tulip trees that will, if properly maintained, live to be as grand as the willow oak.

UPDATE: The growth rings of the Willow Oak were counted and the tree was planted around 1930. It achieved a magnificent size in the span of 85 years!

Are you a member yet? Learn more about Greensboro’s only member-supported preservation organization by exploring our website or joining our Facebook page. Please contribute today! Special contributions indicated for trees will be restricted to that expense.