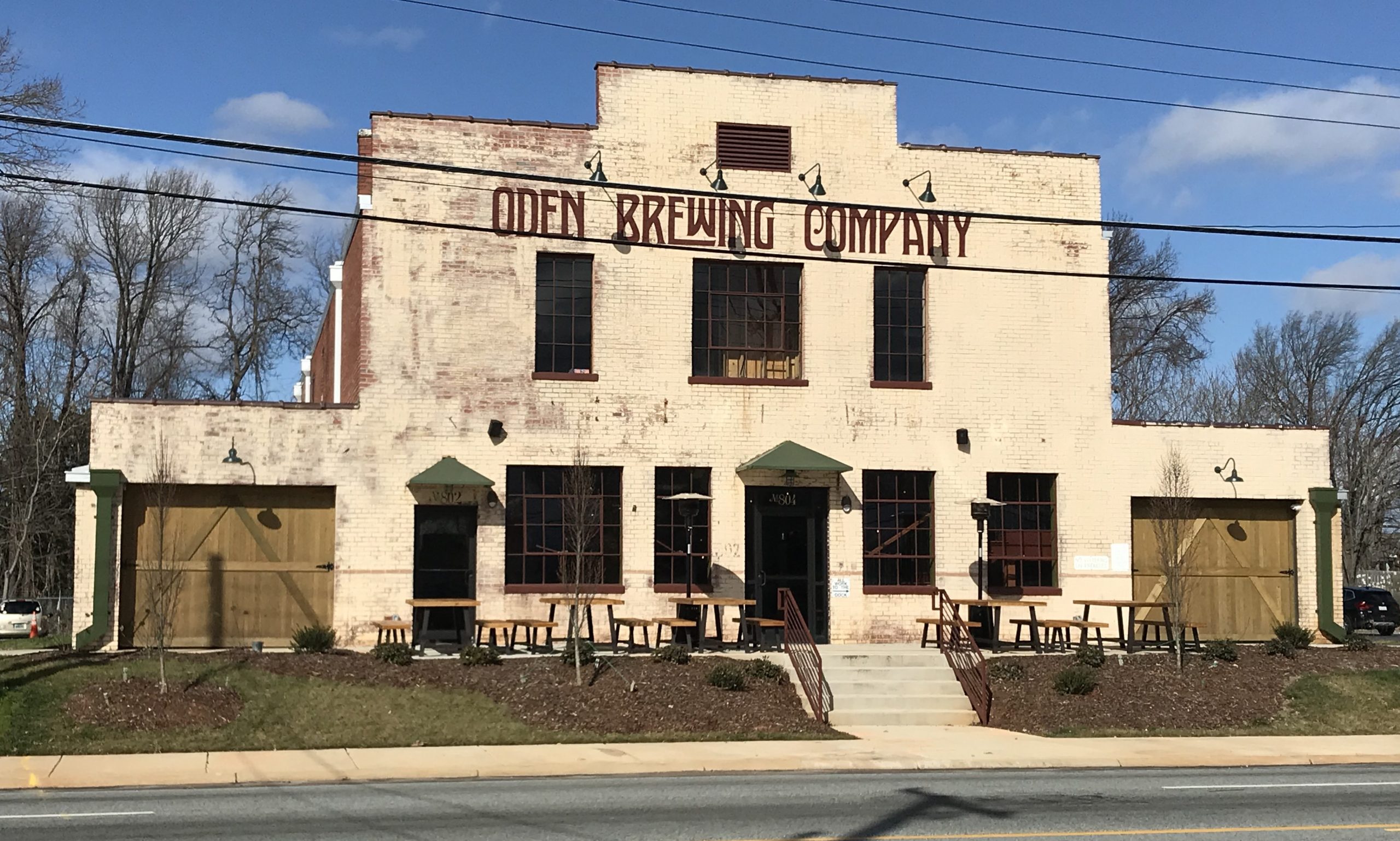 At Preservation Greensboro’s 54th Annual meeting held February 12th at the Colonnade at Revolution Mill in northeast Greensboro, attendees helped celebrate re-investment in our city. Preservationists recognize that some of our most challenging properties can be transformed into some of our most treasured places. Preservation Awards include rehabilitation that followed the Secretary of Interior’s Guidelines and illustrate the transformative magic of our movement.

Three-Centa Bottling Company (Oden Brewery), 804 Gate City Boulevard, Glenwood (image, top)
In the 1910s, beverage and bottling companies were established throughout North Carolina due to the increased consumption of soft drinks and the preference for enjoying them in bottles instead of soda fountains. William Lafayette Oden witnessed the growth of beverage companies such as Pepsi Cola, Dr. Pepper, Coca-Cola and Canada Dry and sought to emulate their success by offering the “Three-Centa” brand carbonated soft drink from this building constructed in 1939 for a whopping $2,000! With the demise of Three-Centa a few years later, Oden replaced the brand with Buffalo Rock ginger ale and remained in operation until 1963. The Pugh Metal Plating set up shop in the structure until 2017. Though preservationists sought to have the property listed to the National Register, this could not be accomplished. The Oden family continued with a preservation track and hired Colmar Contracting to lead the restoration process as the facility was adaptively reused as a craft brewpub owned and managed by descendants of W. L. Oden…John and Jan Oden.

The Leak House was built by Minnie and Frank Leak around 1912, and it experienced a period of neglect and vacancy over the past decade. In 2017 the house was purchased by the Preservation Greensboro Development Fund, a non-profit organization that works to save historic properties throughout Guilford County, in order to see that the home was preserved and not demolished. The nonprofit sold the house with a Rehabilitation Agreement to assure restoration work is completed, in addition to a Preservation Easement to monitor appropriate alterations to the site and structure.

After restoration, the house was acquired by Shelley and Jeff Segal, who have cultivated the history of the house with period antiques and art. Today, it is a residential office, a charming place for working…and for entertaining. The home’s grand facade once contributes to North Elm Street’s famed “Gold Coast” of early twentieth century mansions, and makes an impressive statement on the vitality of our city’s preservation movement.

Under the name of Hudson Overall Company, Charles C. Hudson began manufacturing overalls in 1904 above a South Elm Street storefront. After the company was renamed “Blue Bell”, rapid growth led to construction of this new factory structure at 626 South Elm Street by 1919. Blue Bell was the nation’s largest single maker of overalls exclusively for the wholesale trade, and a celebrated Greensboro-based brand. The building remains an important touchstone to Greensboro’s textile manufacturing history. In 1987, the building was rehabbed as the Old Greensborough Gateway Center – a complex of small offices and specialty shops. Recently, the factory was acquired by developer Andy Zimmerman, who invested $5 million to reconfigure the 109,000-square-foot building to a modern open-plan office building. Today, Centric Brands, is now the anchor tenant of the restored 100-year-old factory and employs 213 employees.

When Ada Capitolia Kirkman bought a generous lot on Percy Street in the Dunleath neighborhood in 1918, she embarked on the construction of a grand brick foursquare built on a scale that was unusual for Greensboro. Ceilings are high, rooms are mammoth, and even the baseboards are tall. Ada was born in Alamance County just after the Civil War, and she rented a house on today’s Smothers Street across from the old Southern Railway Depot with her three children, a smattering of siblings and boarders before her grand home was erected.

Joyce and Jon Enos purchased the house in 2013 and began a major restoration project that clocked more than 7,700 hours of labor to convert the house back to single family use. Many items came from Architectural Salvage, specifically cabinets, flooring, doors, hardware, sinks, and tubs! The once run-down residence now stands among the best restored in the historic district.

Judge Thomas Jefferson Shaw, the builder of this eclectic house, was a barrister and jurist of statewide repute. Shaw was elected to the Superior court bench in 1899. During his eight-year term, it was said that “Judge Shaw is pre-eminently one of the best judges on the Superior court bench. The rambling two-and-a-half story Colonial Revival-style house features a striking multi-colored stone façade that is attributed to Greensboro architect J. H. Hopkins.

The house never fell into disrepair, per se, but by 2017 it was certainly threatened under ownership of a bank that could have sought sale to the highest bidder. With interest from the surrounding neighborhood, the bank sold the property to the best buyers in Kristi and David Ciener, who enthusiastically restored the house from cellar to garret and returned key features such as tile floors, mantels, and double-hung windows. Once again, the Shaw Place stands restored, and represents the oldest house in Sunset Hills.

The Sellars House was built in 1913-14 for Carl Dewitt Sellars and his wife Viola Fitzpatrick. Sellars was descended from the Crossroads community in Alamance County where the Murray and Lea operated several family plantations. These historical narratives grew famous in 1976 when Pulitzer-Prize winning author Alex Haley published a novel entitled “Roots” that documented his family lineage through ancestors connected to these names such as George (Chicken) Lea, his daughter Matilda McGregor Lea Murray, and her son Tom Lea.

The Sellars House was not derelict when it was acquired by Youth for Christ in 2017, but it is fair to say that historic preservation was not a priority until that time. Youth for Christ is fortunate to have Tom Sears, a strong preservationist, and Mark Robertson, as project leaders. With their guidance, historic preservation took a high priority as the house saw reinvestment, and work included period colors and restoration of key features inside the house such as floors and windows. With their care and investment, the restored Sellars House makes an impressive statement alongside other mansions of Greensboro’s Gold Coast.

The Kaplan Apartments (Hartmann at the Flatiron)

Built in the acute angle created by the insertion of Summit Avenue into the intersection of Lindsay Street and Church Court (old Church Street), this apartment building was constructed for investor A. W. Kaplan as a four-unit income property in 1922. It was designed by Charles Hartmann, an architect newly arrived in Greensboro from New York, hence the Flatiron’s “Gotham” vibe.

The Mediterranean Revival composition was described as “the most complete and modern Apartment House yet erected in the city”. It was re-platted in 2011 as condos by Jane and Richard Levy, and work continued from interior to exterior of the next several years as the building was systematically restored with help from Richard Gantt. Much credit goes to Melvin Harper, the carpenter extraordinaire, who tended to the details and made this a true preservation project.

The organization recognized the work of dedicated volunteers. Dr. Terry Seaks was applauded for the contribution of his insights and stewardship in the care of the furnishings collection at Blandwood Mansion. Leslie and David Millsaps were  presented the Volunteer of the Year award for their role in supporting the organization on the board, as sponsors of events, and as great advocates of historic preservation. Leslie passed in October 2019 and is dearly missed.