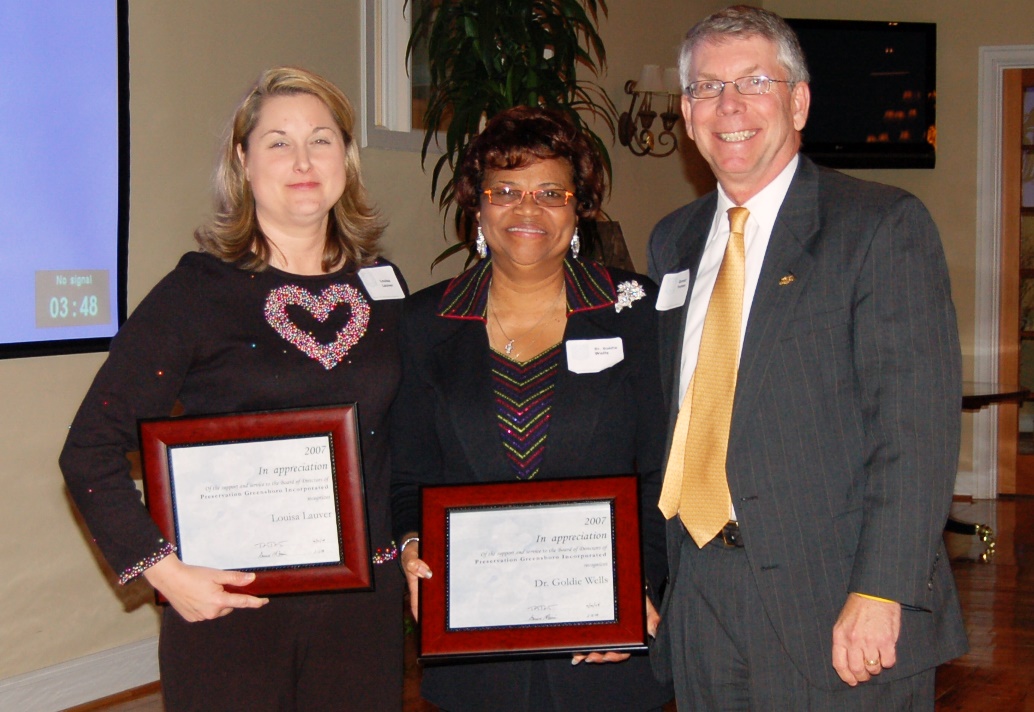 Greensboro has a long history of historic preservation and adaptive reuse, dating back to the 1887 conservation of the Guilford Courthouse battleground and the 1924 establishment of the Greensboro Historical Museum in the old First Presbyterian Church. Today, historic preservation remains an important part of the Gate City’s identity and character, illustrated by nine exciting projects recognized at last week’s Preservation Greensboro Annual Meeting.

Recognition is warranted due to the scope, scale, and dedication invested in each project by owners, designers, and craftspeople. Historic preservation is a team effort that includes many talents and professions; and it is the pleasure of Preservation Greensboro to recognize some of the most exciting and noteworthy restoration projects that have been completed in 2008.

Projects located throughout the county were selected by the Preservation Greensboro Advocacy committee for awards. These projects represent the diversity of preservation in our community including commercial, institutional, and residential projects. More information will be shared about the award winners in the Spring issue of Landmarks, the preservation magazine of Greensboro.

The Waddell-McAdoo-Spease House was lovingly restored by Lori Ann Harris. This McAdoo Avenue house in the Southside Neighborhood was constructed around 1899, and includes details such as quarter-sawn oak trim, leaded-glass windows, and a grand staircase. The home was careworn when Lori Ann purchased it in 2004 from her uncle and aunt Spease, but today the house has been fully restored and stands as a landmark in the Southside neighborhood.

The George L. Anthony House is described as a substantial, well-preserved, late 19th century farmhouse. The land around the home on Pleasant Garden Road was acquired by Signature Properties for the development of an apartment complex. Instead of destroying the house, Donald Draggoo Interiors drew plans to preserve the home as a clubhouse for use by the residents of the community, now know as the Gardens at the Anthony House. Today, the home is admired by a new generation of residents who enjoy the inviting front porch, Victorian details, and gracious rooms.

The Daniel E. Albright House moved several times before finding a permanent home on West Friendly Avenue across from Friendly Shopping Center. Once threatened with demolition, the community rallied behind the Junior League of Greensboro’s plans to restore the Italianate house for use as their offices. Thanks to the generosity of the Benjamin Family and Starmount Company, as well as architect Carl Myatt and a host of sponsors and volunteers, the Albright House remains as a tangible reminder of Greensboro’s antebellum past and a gathering spot for the dedicated members and beneficiaries of the League.

Located on Summit Avenue, the Rankin King Farmhouse could have been destroyed to make way for a new elder community. However, George Carr of Beacon Properties saw the potential of restoring the old farmhouse as a centerpiece of the community. The craftsman–style home was restored and now stands at the heart of a cluster of new homes entitled “Rankin Place”, sure to serve as a touchstone for future residents who remember the old days growing up in places just like this.

Historic barns were added to Preservation Greensboro’s Treasured Places Watch List in 2007. However, that did not deter David Carpenter and Rebecca Howe from embarking on a sensitive restoration of the family’s barn on Mt Hope Church Road. The barn was built by John C. Foust some time in the nineteenth century, and it has been meticulously restored by contractor Steve Cole of Old Salem. Thanks to their efforts, one more barn has been preserved in Guilford County’s rapidly changing countryside.

Located within the heart of the Aycock neighborhood on Percy Street, the James R. A. Wilson House has been the home of Dr. Marian Earls and Jerry Ramsey for years. Though the interior had been carefully restored, the exterior still held its false siding and lacked its original details and woodwork. A comprehensive restoration brought back the beauty and period features of the house such as the drop pendants and fish scale shingles. Once again, a 100-year old home – is better for the wear – in Greensboro!

Nearly lost to fire in 2004, the C. P. Carmichael House has risen from the ashes thanks to the dedication of its long-time owner, Paula White. The restoration was orchestrated by veteran contractors Joe Bauer and Joe Thompson, who brought the house back to its pre-fire splendor. On top of that, the house was recognized by the city as a Guilford County Landmark last summer. This 85 year old showplace in Fisher Park house will continue to slow traffic on Sunday afternoons thanks to the dedication of its owner and craftsmen.

The interesting building on East Friendly Avenue in downtown once housed the fruits and produce wholesaler W. I. Anderson Company, but members of the Purrington Moody Law Office recognized the building’s charm for their own offices. After a thorough restoration of the exterior façade, including reopening numerous windows, the building now hums with the hustle and bustle of a modern office in the heart if the city. We hope this is thoughtful rehabilitation will inspire similar projects in Greensboro’s center city.

Archdale Hall at Guilford College was built in 1885, and was overhauled twice, in 1927 and 1968. Last year’s restoration removed all of the 1968 finishes and replace them with materials more typical to the early 20th century. Today, the 7,000-square foot faculty office building is renovated in a way that will both improve the building’s energy efficiency and bring its interior in alignment with its historical appearance. Guilford has even applied for LEED certification – a first for higher education in Guilford County. This is historic preservation for the future!

Preservation Greensboro is the only city-wide nonprofit membership organization to save treasured historic and architecturally significant places. Programs range from workshops and walking tours to awards, Architectural Salvage, children’s activities, and our quarterly publication, Landmarks.