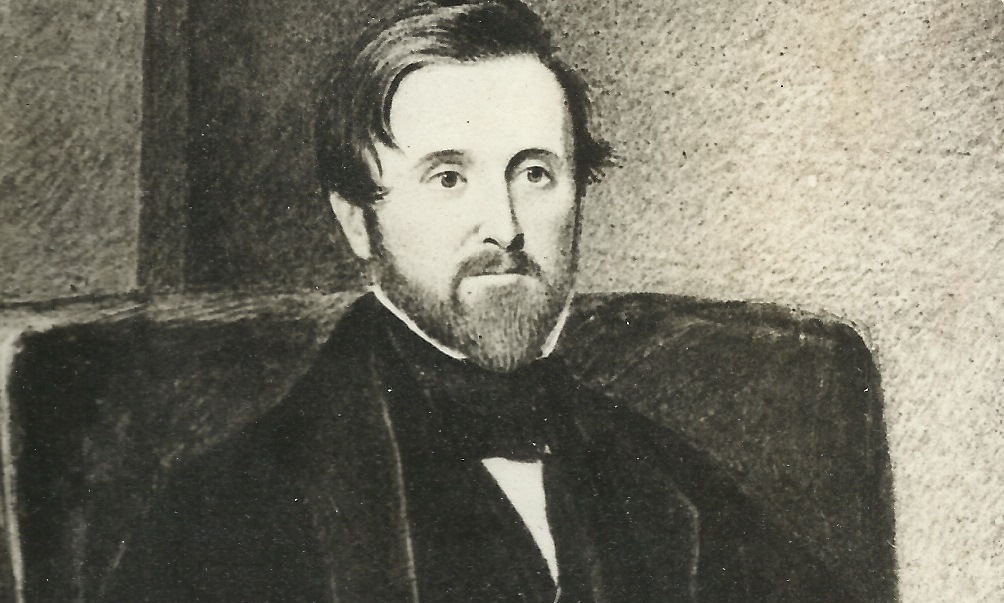 When constructed in 1844 -1846, A. J. Davis’s charmingly Spartan façade for Blandwood was groundbreaking not only for North Carolina, but for the United States. Researchers long ago established that Blandwood was among the earliest, if not the earliest, residence designed in the Tuscan style (there was no Italy in 1844 – Tuscany was a recognized as an independent state) in America. It’s construction and publication in a popular book entitled A Treatise on the Theory and Practice of Landscape Gardening by Andrew Jackson Downing initiated a nationwide admiration for things Italian. It influenced American architectural style for decades by introducing features such as prospect towers, wide overhanging eaves, and low-pitched rooflines to the lexicon of Victorian design for the next fifty years.

Less explored are the architectural antecedents that influenced the form of Blandwood’s façade. Building forms and aesthetics spoke to the period’s classically trained minds, and influenced their perceptions and associations of the house. Like the mysteries exemplified in Dan Brown’s 2003 novel “The DaVinci Code,” Davis incorporated unspoken codes and associations into the façade of Governor Morehead’s mansion that evoked ancient ideals of perfection and harmony.

Born in 1803, Davis developed an eye for aesthetics early in life, trading his toys for a set of paints and illustrating views of cities. At the age of twenty, he moved to New York where he honed his drawing and drafting abilities by enrolling in the Antique School, an informal assembly of painters and sculptors. Increasingly, Davis grew interested in classically inspired buildings, demonstrated through a composition entitled “view through a monumental Greek portico” of ca. 1828-1830, and a “Design for an Academy of Arts” of the same period depicting a building based on Greek temple-form plans. His interest was fueled by observing illustrations in popular architectural books and by keeping scrapbooks of prints and drawings of early European architecture. In 1829, Davis was invited to become the partner of established architect and engineer Ithiel Town, and the two immediately won prestigious commissions in and around New York City.

Davis was introduced to North Carolina through Robert Donaldson, a wealthy New Yorker and North Carolina native who was a patron of Town and Davis. Their firm was commissioned to design several buildings in the state, including the North Carolina State Capitol in Raleigh, and additions to the campus of the University of North Carolina in Chapel Hill. In both cases, new and progressive designs inspired from ancient classical architecture were brought to the state for the first time.

Governor John Motley Morehead sought Davis’ suggestions for an addition to his traditional fifty-year-old frame residence “Blandwood” on the outskirts of Greensboro. According to Davis’ detailed diary, the two men rode by Morehead’s impressive carriage to Greensboro on February 3, 1844 where spent three days with the Governor making careful observations of the house, its site, and its potential.

In contrast to many of Davis’ commissions that were often executed by request through mail, Morehead and Davis were able to articulate their expectations and collaborate on ideas for the new wing to Blandwood over the course of their stay. It is likely that both men came to the site with strong ideas, but the mutual respect illustrated by their long friendship encouraged compromise in the final plans for the design of the structure. Though correspondence continued between the two for months, letters on file at Blandwood indicate the content of communication was on details of windows locks, hardware and doorknobs; indicative that the composition of the façade had been finalized (image, right).

The plans Davis developed for Blandwood are based on ancient principles based on three’s, otherwise known as the tripartite theme. The tripartite theme is quite extensive at Blandwood, appearing in form, decoration, and proportion. For example, the main house and flanking dependencies create a tripartite ensemble, linked by arcades of three openings; the three-story, three-sided tower contains three-part windows and is a component of a three-bay composition. Even the chimney caps at Blandwood contain three opening from which smoke could pass. The three main chambers of Davis’ wing and three interior staircases simply add to the intriguing theme.

Davis did not invent the tripartite theme, rather, he likely adopted its logical principles from Renaissance architect Andrea Palladio (1508-1580). Palladio’s designs were widely celebrated by neoclassical architects of the late eighteenth and early nineteenth century, including Thomas Jefferson, Charles Bulfinch (Boston), and Robert Adam (United Kingdom), who studied a publication Palladio wrote in 1570 entitled Four Books on Architecture. The widely distributed book was translated into the primary European languages and reviewed materials, plans, and elevations of early Roman buildings, including temples, villas, bridges, and palaces, outlining the features of the formal Orders (Doric, Ionic, Corinthian, Tuscan), as well as proportion, and form. Palladio is remembered for what is known today as the Palladian window, featuring a central arch flanked by two narrow windows, often seen in Colonial Revival and Neoclassical Revival architecture in Greensboro. Palladian architecture often features tripartite themes, including hyphens, bays, and flanker wings as A. J. Davis designed for Blandwood. His designs and observations were valued for their classical reference, proportion and symbolism.

The symbolism of the number three was significant to Renaissance minds, who reveled in logic, science, and humanism. Tripartite themes were used to meld ancient Greco-Roman beliefs with Christianity. Where Greeks had three Fates, three Graces, three Gorgons, and three Furies, Christians had the Father, the Son, and the Holy Ghost of the Holy Trinity. The theme also carried into science and logic with three ideas of matter –mineral, vegetable, animal, three tenses –past, present, future, and the three divisions of mankind –spirit, soul, and body.

The perfection and harmony of the number three was a widely popular theme surely known by two great minds such as Davis and Morehead. During his three-day stay in Greensboro in 1844, the two men likely discussed and concocted how the new façade for Blandwood would look, and imbued the design of the residence with symbols that spoke of Morehead’s logic and sophistication. Blandwood was to be a showplace for North Carolina, no longer the Rip Van Winkle state but a progressive state with one foot in New York and the other firmly fixed in Europe. The Italianate style of the house, along with proportion, and the symmetry of threes would illustrate to the cultured visitor that North Carolina, Greensboro, and Governor Morehead were enjoying a Renaissance of their own.