Once Slated For Demo, This Craftsman House Is Now On Tour 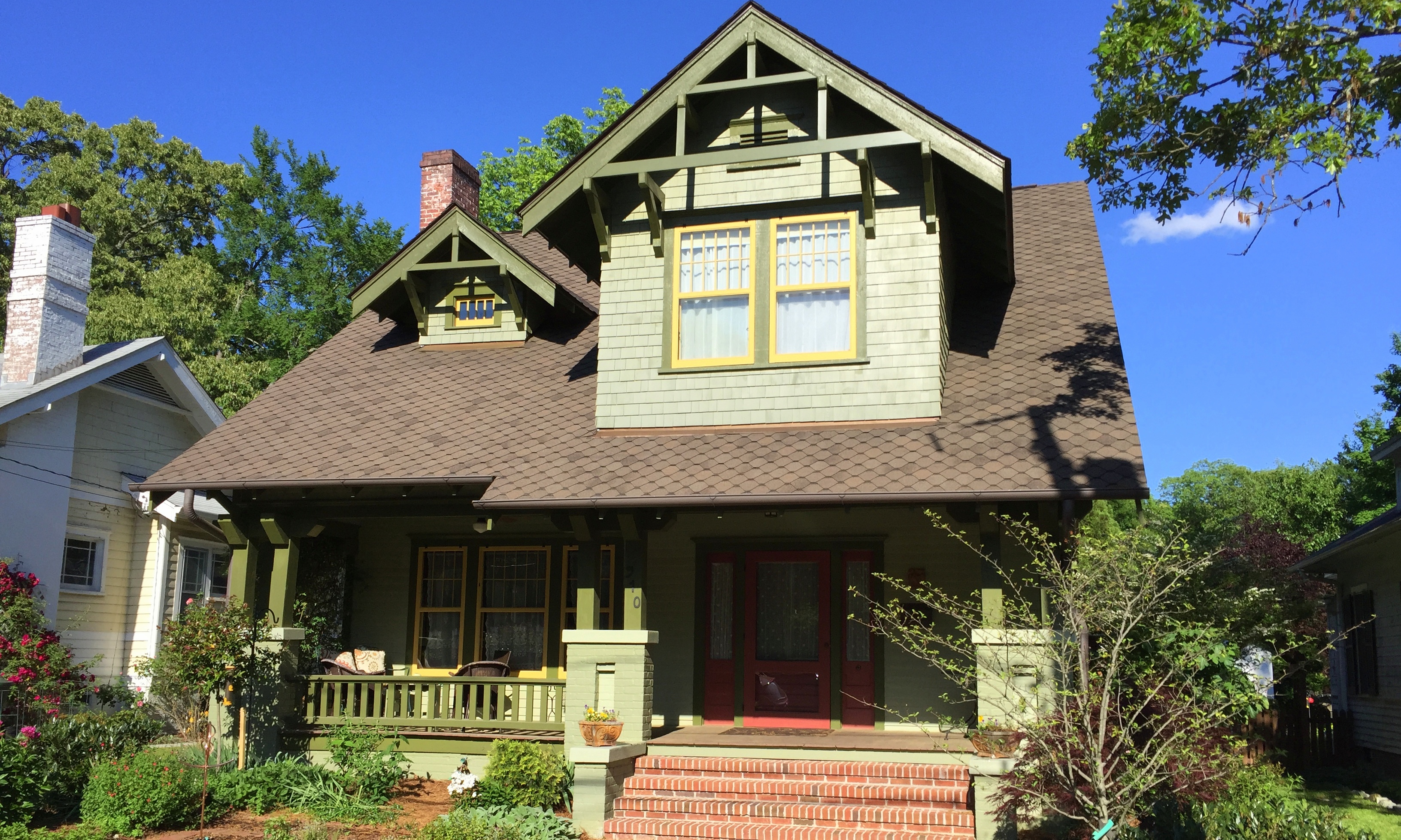 Slated for demolition as recently as 2010, the Sweeney-Penn House at 910 Magnolia Street was completely restored by its current owners. Today, it is an exceptional example of Craftsman architecture, emblematic of the rehabilitation that continues in Fisher Park.

Margaret (Madge) and William LeRoy (Roy) Sweeney were natives of Nashville, Tennessee. The couple married in 1900 and had three children: George, Margaret, and Gladys. The family moved to Spartanburg, South Carolina, where Roy was a traveling salesman for Columbus Car Manufacturing. The family moved to Greensboro when Roy became a sales representative for “elegantly finished” horse-drawn buggies.  The family resided at 706 Fifth Avenue in the Dunleath neighborhood briefly before moving into their new Magnolia Street home in March 1916. The Sweeneys owned the home for only 18 months before advertising, “Magnolia Street House For Sale, We offer for sale the Sweeney Home, 910 Magnolia Street, Seven rooms and bath, modern throughout, including steam heat. Owner leaving the state.” The couple moved back to Spartanburg, and the house was sold to Sue and John Thomas Penn.

The Penns were from Virginia and lived in Asheboro before locating in Greensboro in 1915. They had three children: May Belle, Walter Clement, and Phyllis. Penn was Vice President of Southern Atlantic Lumber Company, a wholesaler of North Carolina pine and oak with offices in Greensboro and New York City. By 1921, the Penns moved to a grander home at 819 North Elm Street.

The family of Emily and Charles McIver, Jr., were next to own the property. At the time, McIver was a cotton broker with Bradshaw-Roberson Cotton Company. His father is remembered as the founder of the women’s college that became the University of North Carolina at Greensboro.

The 2,000 square-foot house fell into disrepair in the 1990s when its elderly owner was not able to maintain it. After her death, the house was placed under a Demolition Order by the City of Greensboro. It was recognized in 2009 as one of Preservation Greensboro’s most endangered properties.  The house is significant for the Magnolia Street streetscape because of its unusual clustered-post porch supports, its asymmetrical façade, and unique exposed gable wood-framework. It is listed as an important structure in both the local historic district and the National Register Historic District.

The Preservation Greensboro Development Fund contacted the owner to offer assistance. Volunteers cleared legal obstructions to the sale of the property, removed truckloads of materials and opened the home during the 2011 Tour of Historic Homes (image, right). Several suitors stepped forward; Cheryl and Tracy Pratt placed the winning bid. Tracy’s knowledge as an architect blended with DLM Builders’ expertise to create a plan to address this challenging restoration project, while Cheryl investigated sources to incorporate the philosophy of Craftsman architecture into the home. The project benefited from North Carolina‘s Historic Preservation Tax Credits.

Innovative ideas included capturing space beneath the high roofline to create a “hidden” full bathroom on the second floor. A sophisticated urban garden was planted in the back yard. Though changes to the house were minor, the footprint was slightly enlarged to expand the kitchen by a few feet and to enlarge the master bath and closets. Interior appointments celebrate the color palette and design choices popular during the Craftsman period.

The back yard has been efficiently designed with social, gardening, and utilitarian spaces. It is a creative example of an urban outdoor space. Restoration on the house and grounds began in 2012 and was completed by March 2013. The project received a Preservation Award in 2013!