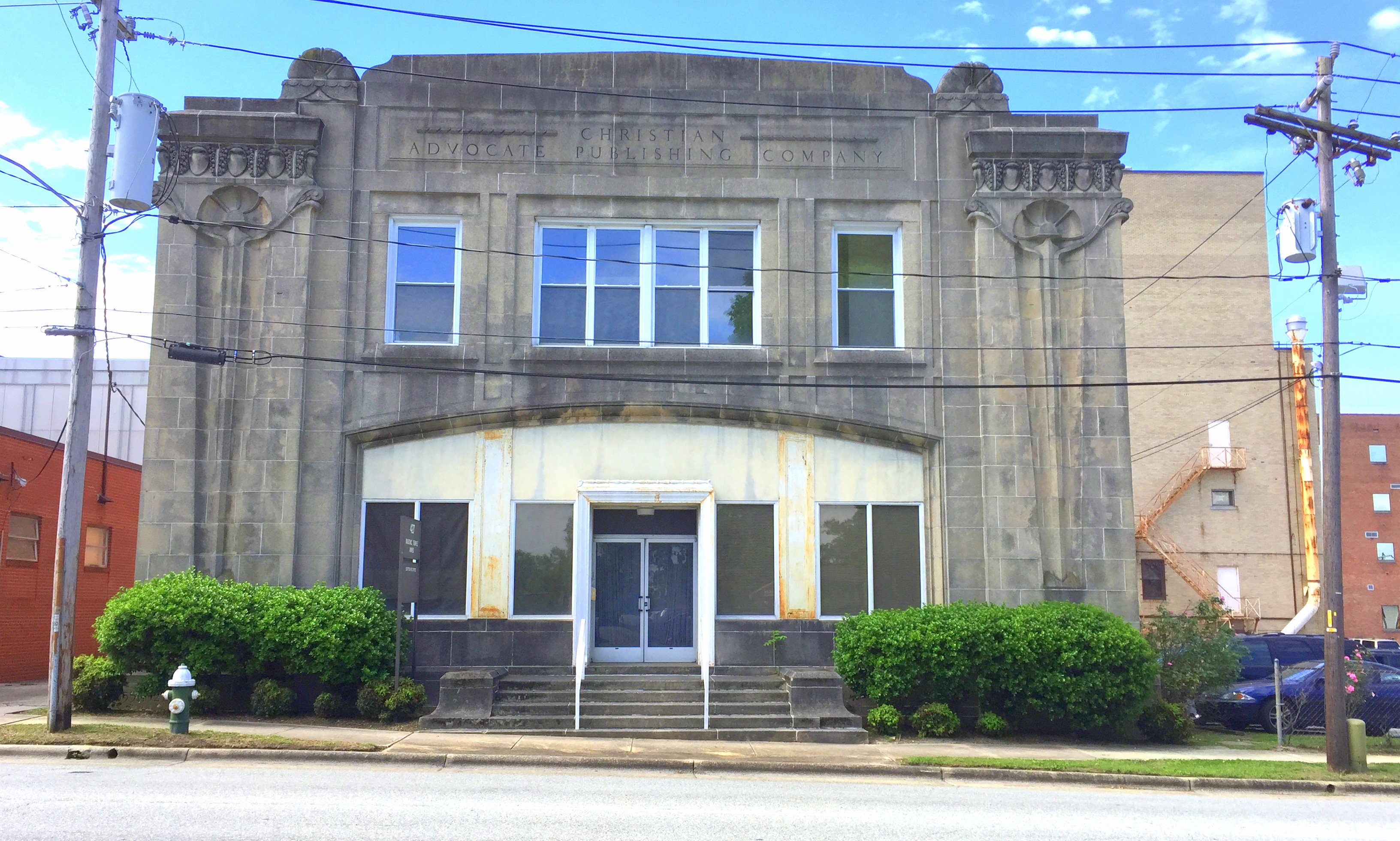 Located at 429 West Friendly Avenue in downtown Greensboro, the Christian Advocate Publishing Company Building was among the earliest structures downtown recognized for significance in the city’s first historic architectural survey of 1976. Architectural Historian Ruth Little-Stokes wrote of the building in the survey “2-story brick commercial building with masonry main façade of dramatic Egyptian Revival design. One of the few examples of this popular commercial style left in North Carolina.”

This week, a demolition permit was issued for the structure.

The building was completed in 1927 to designs by Greensboro-based architect Charles C. Hartmann. Hartmann was responsible for many structures in Greensboro ranging from the Jefferson Standard Building and the UNCG Quad to the Julian Price Estate known as Hillside in Fisher Park. The Christian building is Hartmann’s only known example of Egyptian Revival design. The structure exhibits unusual details articulated in terra cotta tile, including sumptuous lotus-designed pilasters with clawed feet at their base and topped with garland-and-shield entablatures.

The Christian Advocate Publishing Company was established in 1855, and published a journal affiliated with the Methodist Episcopal Church entitled “North Carolina Christian Advocate.” The Journal covered topics important to the church including education, health, temperance, and affairs of area congregations.

Today the building is owned by the Greensboro Masonic Temple, located on West Market Street. The Masons have been excellent stewards of the historic 1927 Lodge they still occupy, but they have been challenged by the Christian building. The Mason’s maintain that the building is structurally deficient, contains hazardous materials, and that it is cost-prohibitive to restore.

The City of Greensboro Planning Department has applied for a Historic Preservation Fund matching grant to update Greensboro’s Historic Resources Survey. The purpose is to identify historic buildings, especially in the downtown, that may be eligible for historic rehabilitation tax incentives. This project will support investment in the rehabilitation of the city’s inventory of vacant and underutilized buildings. The City recognizes that our historic buildings are a valuable resource, not only for their economic development potential but also because they are such an important part of Greensboro’s unique identity. The survey has been sought to make owners such as the Masons aware of these funding outlets so that they may better plan for use and improvement of historic properties.

Plans for the site after demolition include a parking lot.

Split Levels and Ranches: Random Woods Typifies the 1960s
March 25, 2022
Please Join Us!
Did you know? As Greensboro’s only not-for-profit advocate for historic preservation, we receive no funding from city, state, nor federal sources. Our success is based on your support. Members receive two free passes to Blandwood, and much more. Preservation Greensboro is among North Carolina's oldest city-based organizations dedicated to saving our community's architectural treasures!
Join Us!
Go to Top
Loading Comments...