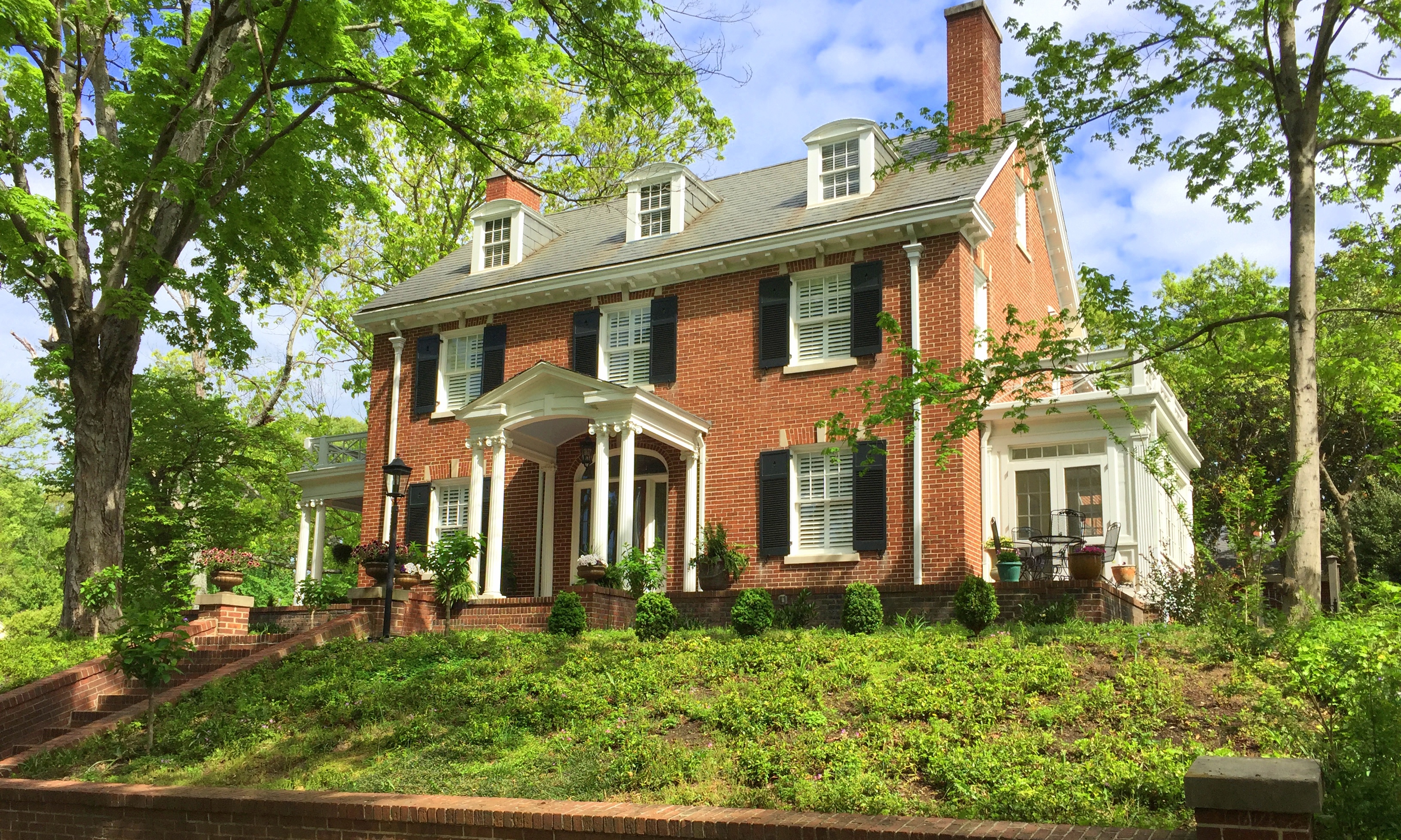 Standing prominently on its hilltop lot, the Julius R. Pitts House at 114 West Bessemer Avenue is a classic example of Colonial Revival architecture. In March 1927, the Greensboro Daily News reported, “J.R. Pitts will build a $19,000 residence on the northeast corner of Bessemer Avenue and Carolina Street. The house will have nine rooms and will be two stories with slate roof and a brick-veneer construction. J.C. Morris is contractor.”

Pitts and Morris were a professional team who were also socially connected. Pitts was a native of Guilford County. In 1898 he partnered with O.W. Monroe to form a lumber, millwork, and building material company, Pitts and Monroe Lumber. Around 1915, Pitts secured full ownership and renamed the business Pitts Lumber.  Pitts was quite engaged socially as well, holding memberships in the Chamber of Commerce, Masonic Lodge No. 76, and Woodmen of the World. Morris came to Greensboro from Tennessee in 1898 to build the Southern Railway Passenger Depot on South Elm Street. On weekends the duo would enjoy fishing trips together.

The Pitts House is among the most crisply detailed in Fisher Park. The symmetrical three-bay façade is topped by graceful segmental-arched dormer windows, and the main entry features a front portico with fluted Ionic columns. Unusual details include the leaded art glass transom window above the front door, the springer and keystones above the windows, and the scrolled modillion cornice. A sunroom is located on the eastern façade of the house, while an open porch is located to the west. Both are topped by Chippendale-inspired balustrades. Interior details are traditional, including a Federal mantel with relief decorations (perhaps inspired by Wedgewood Jasperware), French doors, and extensive use of delicate turned stair balusters.

Julius built the house late in life. He was about 63 at the time of construction and had been widowed in 1923 by his wife Alice. He commissioned the 4,400 square-foot home in 1927 and lived with his daughter Lelia Pitts, son-in-law Stark Maddox, and four grandchildren: Kenneth, Dorothy, Katherine, and Mark Maddox. The family relied on Betty Johnson, a live-in cook. Julius died in 1944, and his daughter remained in the house until her death in 1949. The house was later the home of Nona and Samuel Hill, and later, Mary Lane and Richard Earl Spencer.

Sheila Sanders and Craig VanDeventer decided to purchase the Pitts House after only one visit in 2014. Pam Frye of Chaney-Frye Properties managed renovations. Using North Carolina Historic Preservation tax credits, modern conveniences were added in the kitchen and bathrooms, and character-defining interior appointments were retained, including a grand hallway staircase. The house is considered part of the Fisher Park National Register and local historic districts, and it received a Preservation Award in 2015!

This house was opened for tours in 2017 as part of Preservation Greensboro’s 7th Annual Tour of Historic Homes & Gardens.