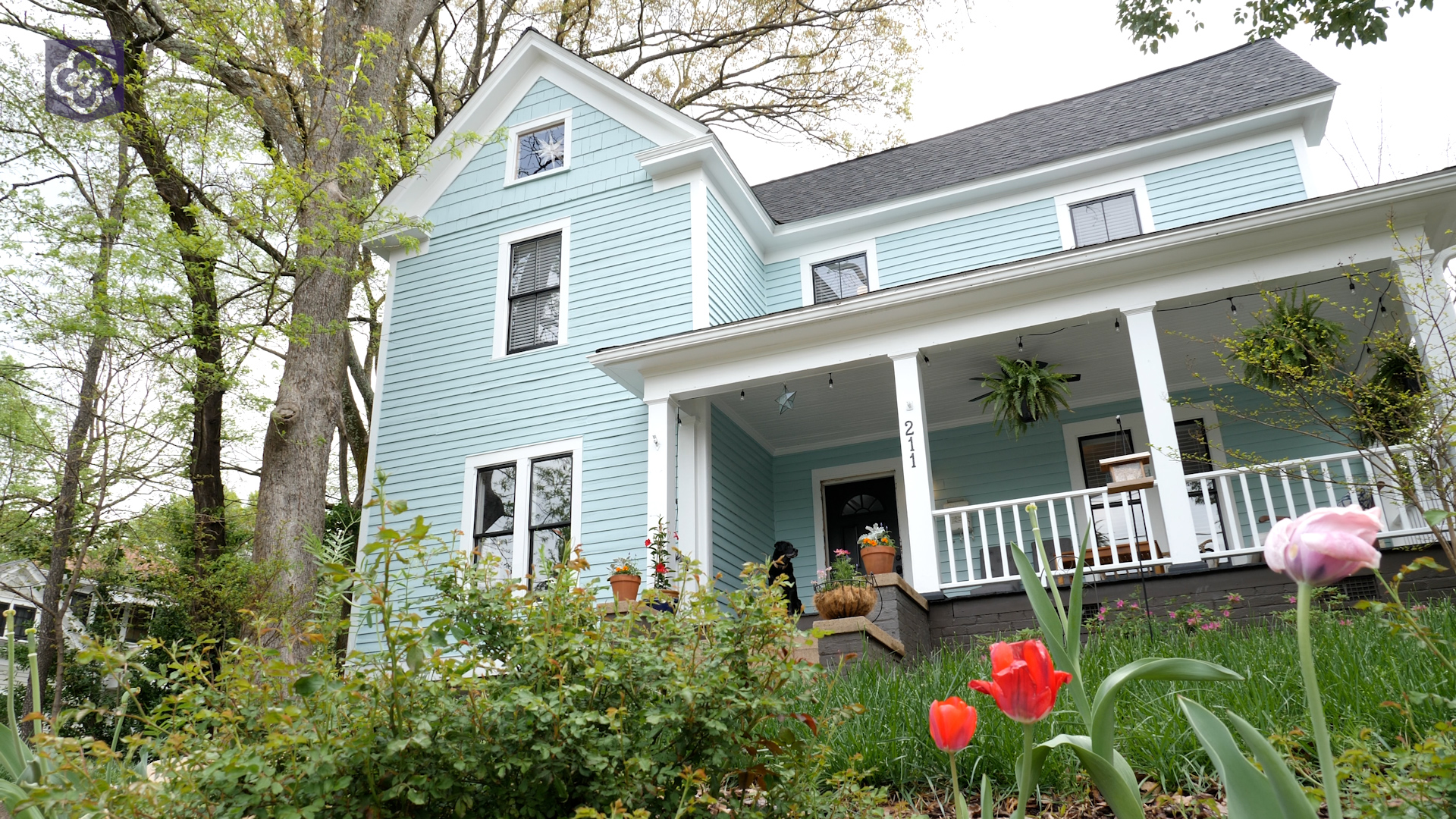 The College Hill Historic District is composed of numerous subdivisions, some large, some small, sprinkled with numerous individual houses that were built as early as 1845. This patchwork quilt provides the neighborhood with the diversity of architectural character that makes the community a flagship among North Carolina’s most historic districts. The Smith House was likely constructed in 1912-13 within the “Lenora” subdivision, platted in 1892 by James T. Tate and the Greensboro Security Investment Company. The gridded subdivision includes Tate and McIver streets between West Market Street and Walker Avenue, along with portions of cross streets Rankin and Carr.

The house appears to have been a speculative investment by real estate agents Leon M. Ham and John A. Hodgin. Hodgin acquired the lot for $550 in 1911, and Ham sold the property in June 1914 for $2,500 – the escalation of price likely due to construction of the residence. Ham ran an advertisement in June 1913 that roughly fits the description of the house:

“For Sale. Tate Street Residence. This is the most desirable residence we know of for the price. Good condition. A good high lot. Good neighborhood. All conveniences. Our price and terms on this property can’t be beaten. Let us show you.”

The Greensboro City Directory documents that briefly, the house was rented by Ham to Marjorie Mendenhall, a recently widowed neighbor. Her husband was Percy Mendenhall, son of Mayor Cyrus P. Mendenhall and namesake for nearby Mendenhall Street.

In June 1914, Ham sold the house to Sallie Smith (1862-1949), wife of Reverend Marshall Andrew Smith (1851-1921). Placing the name of a wife as the owner of the property was a measure of financial security for the family in case of the death of her husband.

An article in the Greensboro Daily News on 31 August 1914 announced:

“Rev. Mr. Smith and family Return. Rev. Mr. M. A Smith and the family returned to Greensboro to make their home and will reside on Tate street. Their return to the city will be welcomed by a large circle of friends made while living here four years ago when Mr. Smith was pastor at Centenary Methodist church.”

The Smith family included three daughters – Blanchard, Elizabeth, and Louise; and three sons – Marshall, Sidney, and William. Reverend Smith was a native of Richmond County NC. He married Sallie Jones of Wake County in 1887. The family lived in a variety of other cities, including Statesville and Johnston County, but he was most remembered through his ministerial work in Greensboro.

As the Smith family children grew and set off on their own paths into the world, and their parents Sallie and Reverend Smith aged and died, Louise remained in the family home where she grew to become influential in the city.

Louise Covington Smith was born in 1904 in Wadesboro and graduated from Greensboro High School in 1919. She majored in three subjects in Woman’s College (UNCG): English, history, and physical education earning a Bachelor of Science in 1927.  She cultivated a lifelong dedication to learning by attending UNC-Chapel Hill, Columbia University, and the University of Mexico.

After graduation, she was hired as a schoolteacher in several other cities, then returned to Greensboro and began teaching English in 1934.  She was proud of her students, including Congressman Richardson Preyer, UNC Vice Chancellor Douglass Hunt, District Court Judges Ed Washington and John Yeattes, Editor of the Greensboro News and Record Irwin Smallwood, and Editor of O.Henry Magazine Jim Dodson. She retired from Grimsley High School in 1970.

She was called “A 20th-century renaissance gentlewoman” by the Greensboro Daily News. She loved writing about North Carolina history. She was deeply devoted to social and civic circles…as a bridge player, president of the Guilford Chapter of Woman’s College Alumnae, leader of the Cheerleaders at Grimsley, and as a participant in Arts and Crafts clubs. She enjoyed sculpting in bronze.

After her retirement, she traveled extensively, visiting Greece, Turkey, Iran, Russia, Nepal, India, Afghanistan, and Mexico. She rode on an elephant, climbed one thousand steps up a Mayan temple, and flew over the Himalayas.

Louise Smith (image, right) was also a voice for College Hill, the neighborhood in which she lived nearly all her life. A rezoning proposal in 1971 attracted her attention. The case would have extended commercial zoning north on Tate Street. Smith was quoted in the newspaper by explaining the neighbors had put “their character and life into this community,” and she warned that it was a “camel in the tent” proposal and decried the area attracting “purveyors of hardcore narcotics.” She was a participant in the College Hill Concept Plan of 1979 that endorsed the creation of Greensboro’s first historic district in the neighborhood in 1980.

Greensboro News and Record interviewed Smith for a Christmas Day article in 1987:

“Buses are the primary means of travel for Louise C. Smith of Greensboro. She said she enjoys riding buses, as she has her entire life. On Thursday, she waited on a bus to take her to Clinton, where she would spend Christmas with her sister. “I’m looking forward to it with great joy,” she said. Smith, a retired schoolteacher, said she has no family of her own. She usually tries to visit her sister during the holidays.”

She died in 1992, ending remarkable 80-year ownership in the Smith family.

The house was acquired in 1993 by the Redevelopment Commission of Greensboro. The work of the Commission was aided by a citywide bond vote in 1990 that provided $2 million for buying houses in College Hill. Houses would receive special funding to facilitate private investment to finance the restoration. The Smith House was cycled through the program and was sold to Mark Guard with requirements to rehabilitate the house for single-family as its owner for 15 years. It remains an owner-occupied and single family residence today.

The house is an example of a vernacular farmhouse, similar to the charming rural homes familiar to country by-ways in Guilford County.  The two-story, side-gable façade is embellished with a forward-facing gable left of center. A 2/3-width porch extends across the remainder of the façade, sheltering the main entry. Boxed eaves, two-over-two double-hung windows, and a shingled gable are among the few decorative features of the house that was typical in pragmatic middle-income neighborhoods of Greensboro before World War I. Interior details are functional, including some early pine floors, window and door “bulls-eye” casings, and some early six-panel doors.

The current owners have enjoyed the house for less than a year but are already taking advantage of the vintage architecture of the Smith House. Strip flooring unites the entire plan of generously sized rooms. Design schemes are bright and airy, with cool tones, natural wood finishes, and contrasting trim colors that accentuate original architectural details.

In 2021, the house was showcased as part of Preservation Greensboro’s 11th Annual Tour of Historic Homes & Gardens.