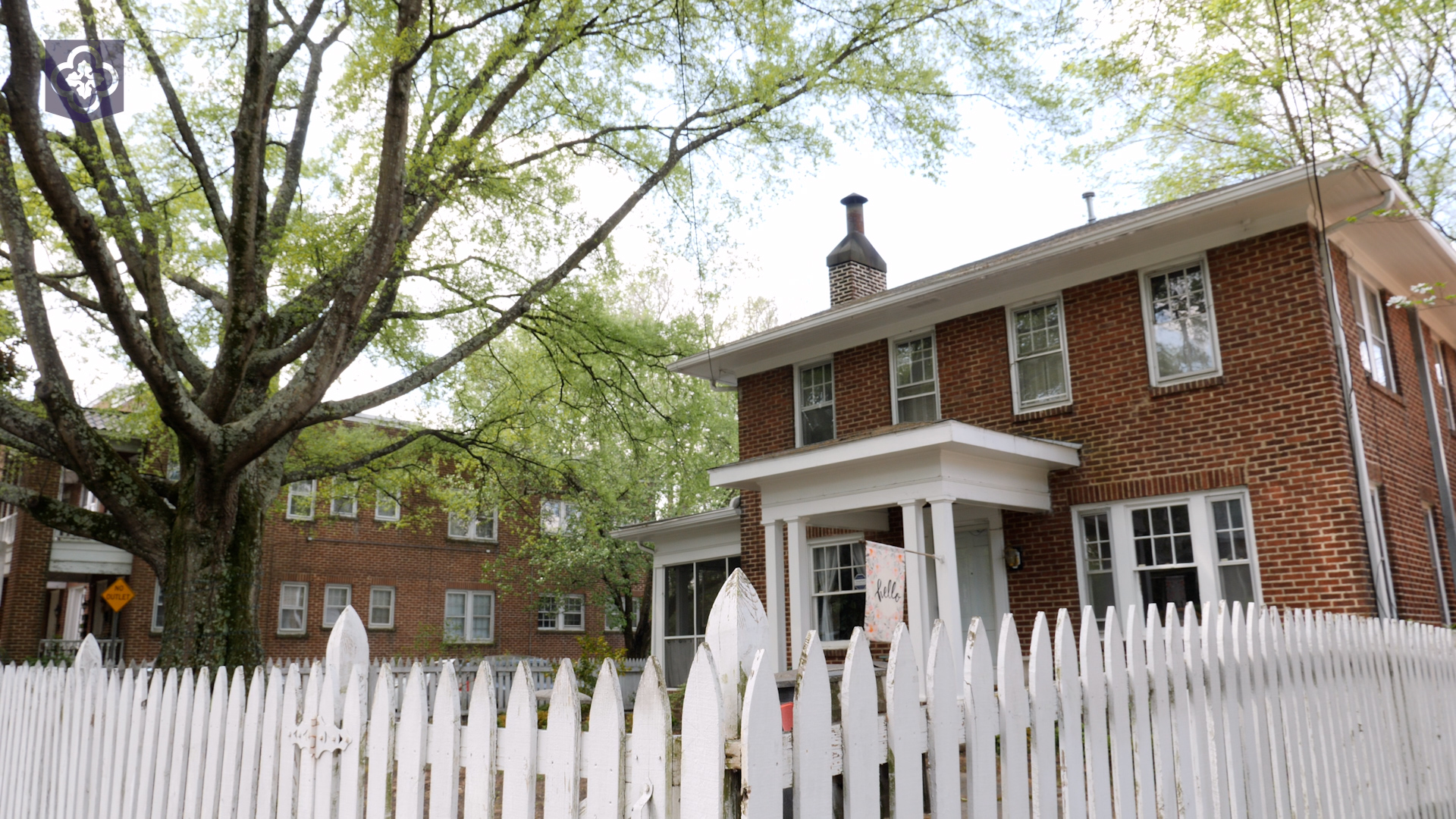 A latecomer to College Hill, the Mildred and Philip McLendon House takes architectural cues from the Boom Era of the Roaring Twenties, but its history stretches much deeper. Before its construction in 1925, the land on which the house was built held ties to a complicated past of social equity that dates to the Reconstruction Era of American History. Architecturally, the brick house blends an American Foursquare form with the Colonial Revival style. It represents a late phase of “infill” construction in College Hill that occurred as Greensboro grew to the third-largest city in the state, and large lots located within central neighborhoods were subdivided for denser housing.

In the late nineteenth century, College Hill was a racially mixed neighborhood that straddled the western limits of the village of Greensboro. Beginning with the Reconstruction Period, African American residents – both land-owners and renters – occupied properties west of Mendenhall Street within an enclave of modest frame houses. In the City Directory of 1879, the address at the southwestern corner of South Mendenhall and McGee Streets was owned and occupied by white farmer-turned-merchant Thomas Bailey and his wife Lydia. Neighbors included Black residents such as carpenter Anderson Nelson, farmers Jerry Cobb and Alfred Ward, laborer Edward Hill, and barber Samuel Wiley, who were scattered south and north of Bailey’s house along South Mendenhall Street

The Bailey’s property was acquired by John W. Hicks in 1883 for $600. City directories from 1887-1890 reference John Hicks as a fireman employed by the North Carolina Railroad and living in College Hill. Maps of 1879 and 1882 indicate a modest one-story frame house on the property and by 1907, a similar frame dwelling was erected to the south. Hicks maintained ownership, but sporadic references in city directories indicate he resided in the city only occasionally. References to an African American cook named Rosa Clark living at 400 South Mendenhall in 1896 suggests the property was also rented as an income property for Hicks.

The property gained attention in 1915 when Hicks, then a resident of Goldsboro, sought to have the title of the property registered under his name against claims of neighboring landowners. In the claim, Hicks’ property is described as “situated in Greensboro, between the State Normal and Industrial College (UNCG) and Greensboro College for Women. It contains a little more than one acre, has two cottages on it, and is surrounded by a high board fence.” This registration was the first in Guilford County under the Torrens System of guaranteed ownership and title.

Hicks might have been monitoring political winds that would render him unable to rent his cottages to Black residents. Registering his ownership of the land would legally assure his ownership for redevelopment and resale within new laws that threatened the racial diversity of the College Hill neighborhood.

The new laws were initiated in 1914, when William B. Windsor, the Black principle of Warnersville Graded School, agreed to rent a house on Gorrell Street from his sister. Residents of the predominantly white neighborhood protested their new Black neighbor and addressed the city commissioners for action. The commissioners devised an ordinance, based on similar laws enacted in Winston-Salem and in Richmond, Virginia, that decreed “That it shall be unlawful for any negro to occupy as a residence or to establish and maintain as a place of public assembly, any house upon any street, or alley between two adjacent streets on which a greater number of houses are occupied as a residence, by white people that are occupied as residences by negroes.”

The ordinance was passed by Greensboro’s board of commissioners on February 16, 1914, as a blatant example of Jim Crow Era racial segregation based on skin color and racial categorization. The ordinance was invalidated by the Supreme Court of North Carolina weeks later on April 8, 1914.

By 1919, Sanborn maps indicated both cottages on Hicks’ land were “dilapidated,” and directories confirm the properties were vacated as early as 1910. In June 1925, John Hicks moved ahead with the sale of nine parcel subdivisions encircling a cul-de-sac named Hicks Court. “It is without a doubt the most attractive site for close-in homes to be found in Greensboro –” stated a newspaper advertisement, “and no other sites are obtainable on Mendenhall Street.” Sales were made to auctioneer William H. Matthews. No racial restrictions were attached to the property deeds.

Lot number 2, addressed as South Mendenhall Street, was purchased by Greensboro entrepreneur C. C. Hudson of the Blue Bell Overall Company. There, he erected a speculative house within a year. Hudson sold the residence for $7,275 to Mildred and Philip T. McLendon.

“New Residents Move Here. Mr. and Mrs. P. T. McLendon, who has recently moved to this city from Baltimore, Md., are making their home on South Mendenhall Street. Mr. McLendon, whose business carries him through a good part of the south, has been seeking a suitable place to make his home and to which to bring his family. After careful consideration, he decided that of all the places he had visited, Greensboro was the best, and forth-with the McLendon family moved.“

Mildred Lindemann (1900-1970) of Baltimore married Philip Thurman McLendon (1880-1967) of Atlanta in 1925. This was his second marriage, and the McLendon’s located in Greensboro to better serve Philip’s employment in sales with a machine company. The first of their two sons was born in Greensboro in 1928 but their residency in the city was short-lived. In 1933 the McLendon’s moved to Atlanta and rented their house to Elizabeth and Joseph Purdy, a general sales manager.

Ownership was conveyed to the Bennette family in 1943 and the Miller family in 1959. The house was maintained as an income property, rented for many years to Clarence Heffner, and later, Mrs. Billie Gurley.

In 1971, the house was acquired by Bob Lowe, a Greensboro native and graduate of Grimsley High School. After service with the Air Force, he graduated from Elon College and was employed as a Special Agent with Internal Revenue Service. In 1970 he was hired by the accounting department at UNCG and bought the house in 1971 to be within walking distance of his work. Aside from the neighborhood’s architecture of older houses, he was drawn to details such as the staircase of the house. Bob met Jim Baulding in 1979, a native of Burlington and graduate of UNC Chapel Hill who was employed as an auditor. The pair met through connections at work and began a long-term relationship in 1979. At the time, the neighborhood held a great deal of rental properties with a high level of disinvestment and slow city services, so the couple moved to Hamilton Lakes in 1988. After 13 years together, Bob died from an aneurysm. The Willow Oak tree in the front yard was planted in May 1979 as a symbol of the start of their relationship. Today the tree remains a grand treasure for the neighborhood.

The African American community of modest frame houses that once existed just west of the property was destroyed by the 1980s for redevelopment. Today, Mendenhall Street serves as the spine of the College Hill Historic District. After numerous investment owners in the first decades of the twenty-first century, the McLendon house is again an owner-occupied single-family residence.

The two-story McLendon house is a blend of a residential form known as Rectilinear Foursquare and a style referred to as Colonial Revival. Foursquare forms are revealed in its low-hipped roofline and wide boxed eaves that are evocative of the Prairie style. However, a small front stoop supported by paired square posts and the tri-partite window is inspired by Colonial architecture, a style rising in popularity during the nation’s bicentennial celebrations of 1926.

The floor plan of the house is casual, with the main entrance opening directly into the living room. Space features a picturesque open-string staircase with gooseneck handrails and two-quarter landings to the second floor. The living room includes a pragmatic fireplace composed of a brick surround topped by a wood shelf.

Opposite the fireplace is a wide entry to the dining room. A butler’s pantry with a breakfast nook, kitchen, and lavatory is located to the rear of the house. Interior trim details throughout the public rooms of the first floor are typical of the 1920s, including classically inspired cap trim casings, oak floors, and French and two-panel doors with glass doorknobs.

The homeowners have used the historic backdrop of the living room to create an eclectic and comfortable space by contrasting plush upholstery and painted and finished case goods with bright neutral-colored walls. The upright piano was acquired from the Presbyterian Church of the Covenant, just down the street! In contrast to the light tones of the Living Room, the Dining Room sports red walls and crisp white trim. Colorful art and a traditional table with Windsor chairs are evocative of the Colonial Revival aesthetic of the house.

In 2021, the McLendon House was included on Preservation Greensboro’s Tour of Historic Homes & Gardens in College Hill.