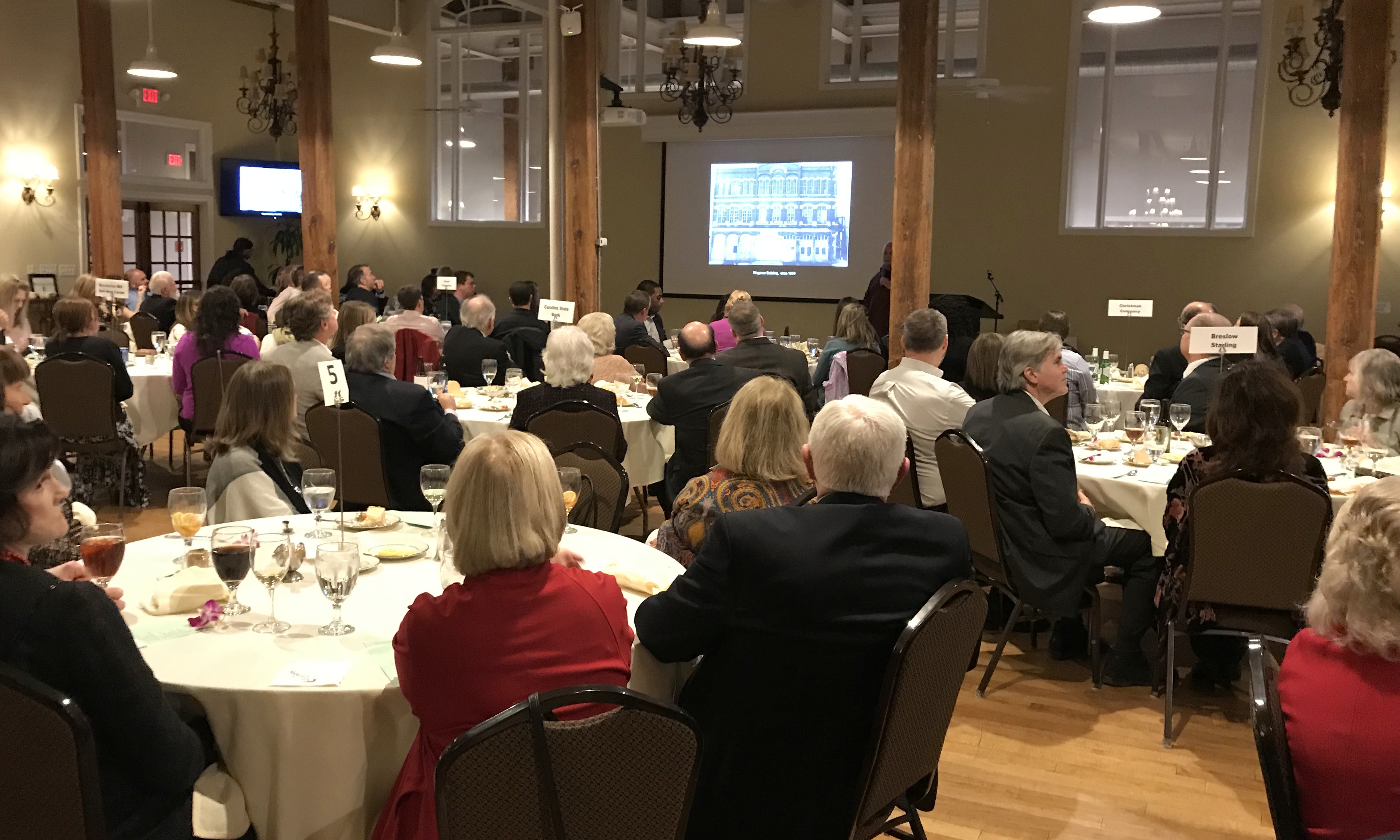 Preservation Greensboro held its 53rd Annual Meeting last evening at the Colonnade at Revolution Mill with 140 attendees. Accomplishments of the previous year were reviewed, along with preservation awards, and a keynote presentation by architect Eddie Belk. The gathering also served as the annual business meeting for the organization as new directors and officers were elected to the board.

Greensboro saw several preservation accomplishments in 2018, including the Hillside/Julian Price Designer Showhouse and a total of $68 million of preservation reinvestment using the Historic Tax Credit program. The largest project was Revolution Mill, designed by Belk Architects. Principle owner Eddie Belk provided a fascinating overview of his 40-year career in preservation architecture, culminating in his Greensboro designs for Revolution Mill and the Mock Judson Mill.

The organization celebrated eight preservation projects, including one in Gibsonville. The awards represented a diversity of preservation projects ranging from private homes and apartments to a sprawling a factory. Awards are selected based on adherence to the Secretary of the Interior’s Standards for preservation, or local historic district guidelines.

The Kate and Jesse Keith House at 623 Summit Avenue

In 1911, Kate and Jesse Keith of Keith and Patterson Clothiers purchased this handsome Foursquare house in the heart of today’s Dunleath neighborhood. The house was built with eye-catching features, such as diamond-paned windows and an impressive verandah sporting Tuscan columns. By 1993, when the Dunleath neighborhood was placed on the National Register of Historic Places, it was one of a just a handful of residential structures remaining of the of grand homes that once stood along Summit Avenue. In recent years, the house began showing signs of deterioration and neglect.

Gastonia native and Washington, DC. resident Jammie Spearman acquired the property in 2018, and quickly set about restoring the building. Attracted by its historic charm, her path to preservation was guided by the Design Review through the Greensboro Historic Preservation Commission. Her investment allows the Keith House to take center stage on Summit Avenue where it presently hosts guests as the Nicholas Bed and Breakfast.

Replacing a small Catholic sanctuary known as St. Agnes on Forbis Street, St. Benedict’s addressed the needs of a growing congregation in the form of a new wood frame sanctuary on North Elm Street. The church was dedicated on October 30, 1899 and took the Carpenter Gothic style to blend with neighboring Queen Anne-style residences. In 1918, the façade was reconstituted with a stone foundation and a brick veneer in the Gothic style. In 1963, the Second Vatican Council precipitated interior changes to the sanctuary as the alter was simplified and the original Gothic features were removed.

Renewed interest in refurbishing St. Benedict’s was a perfect fit for parishioner Tom Garcia. Tom was not new to historic preservation and detailed craftsmanship, having worked on several projects alongside his regular fix-it feature on the WFMY News 2 Morning Show. Skilled artisans such as faux painter Gwen Ware restored Gothic details that were lost 50 years ago inside the 120-year old sanctuary. Special thanks to the preservation team at St. Benedict’s Catholic Church for their attention to detail in recreating of one of Greensboro’s long-lost treasures!

Constructed in 1929, the rambling Hillside Mansion features a medieval half-timbered Tudor façade, a variegated Ludowici tile roof, steel windows, and a cast plaster ceiling designed by Greensboro’s star-architect Charles C. Hartmann. It was built by Ethel and Julian Price, and served as a stage for Julian and the venture which he led, the Jefferson Standard Life Insurance Company. Though designated a Guilford County Landmark Property, the estate began to show signs of neglect and deterioration in the past ten years as the former owner was foreclosed upon by her bank.

Two-time preservation award winners Eric and Michael Fuko-Rizzo boldly stepped forward to save the mansion from potential loss for redevelopment. The pair initiated a comprehensive and dramatic restoration, and generously allowed Preservation Greensboro to partner with them in holding a Designer Showhouse fundraiser as part of the renovation process. The event brought over 9,000 visitors to the property last April and enlivened discussions of historic preservation in Greensboro. Today, Hillside remains a point of community pride that is preserved for future generations to enjoy.

The Cascade Saloon was erected in 1895 by S. J. McCauley, who sold “Wines, Liquors, and Cigars in his new brick building near the Southern Railway Depot”. A few years later, in 1907, Wiley Weaver opened the Cascade Saloon in the northern half of the structure. Weaver’s business was among a small number of black-owned businesses along Greensboro’s primary commercial street during the years of Jim Crow laws, and it is that history that offers a refreshing alternative to the narrative of segregation that was common to many American cities.

The landmark building was the subject of a 15-year preservation struggle that resulted in an innovative partnership with The Christman Company of Lansing Michigan. Christman completed the nearly $4 million project utilizing Historic Tax Credits. Work adhered to the Secretary of the Interior’s Standards, and careful engineering work repaired long neglected brick walls and reconstructed period details. Today, the Christman Cascade Building is re-invented as the company’s North Carolina office and houses highly skilled project managers, estimators, and administrators.

Blanche Rankin and Dr. J. V. Dick built this cross gable Neoclassical Revival house in 1912 on the main northbound street from central Gibsonville. The façade features a wrap-around porch supported by Tuscan Columns, oversized windows, and a shingled gable tympanum. Later, the house was adaptively reused as the Bartlett Funeral Home.  When a tree recently fell across the rear addition, the town of Gibsonville threatened demolition of the abandoned landmark.

That’s when two-time award-winning preservationist Jerry Nix stepped in.  Jerry is quite well known in eastern Guilford County communities for his work saving the Francis Marion Smith House in Gibsonville, and the Foust and the Smith houses in Whitsett. Jerry set about restoring the tree damage, and made important updates to kitchen, bathrooms, and mechanicals to bring this structure into the twenty-first century. Thanks to his heroic efforts, the Dick House stands as one of the best-preserved structures celebrating Gibsonville’s past.

Revolution Mill is known as a flagship of flannel cotton manufacturing in the American South. Composed of many phases of construction, the Apartments at Revolution Mill include the earliest portions of complex dating to 1900. Although this mill has classic features such as heavy timber construction, monitor rooflines, segmental arched windows, and locally-made brick walls; many of these features were covered in the 1950s as industry grew mechanized. By the 1980s, the mill was vacant, but investors recognized the importance of the site, listing it to the National Register in 1984.

In 2012, Self Help of Durham began a reinvestment program designed by renowned architect Eddie Belk and completed by CT Wilson Construction. Belk’s principles used in the Historic Tax Credit restoration program included preservation of vast interior spaces, articulation of structural features, and clear delineation of modern utilities from historic fabric. The structure was reopened last year as a community-engaged apartment campus for market and reduced-rate housing for Greensboro’s creative class.

The Margaret and Thornton Brooks Residence at 415 Sunset Drive

In 1941, the Greensboro Daily News, stated “At 415 Sunset Drive, Irving Park, is a real dream castle. From its circular driveway which lies behind an impressive, yet simple, entranceway, to the pond and formal garden on the opposite side, there’s more than one point of interest.” The Margaret and Thornton Brooks House has always been an eye-catcher. Construction began in 1936, and costs were anticipated to be a dizzying $20,000! Thornton Brooks was the son of a founding partner of the Brooks McLendon and Holderness law firm, where he served as an attorney. The architect of the Hollywood-inspired Regency Style-style house was Greensboro’s William C. Holleyman.
Recently, the house was featured in local press for its abandoned state, including transient squatters. Its neglect attracted interest in demolition for new construction and preservationists grew concerned that another Irving Park landmark might succumb to bulldozers. When Sam and Ashley Simpson won a feisty bidding battle to restore the Irving Park landmark, preservationists cheered. The couple adhered to the Secretary of Interior standards for the Historic Tax Credit project and completely renewed the house while preserving its historic charm.

Constructed for Emily Leftwich by her husband, real estate developer L. B. Leftwich, this four-unit apartment house was described as an “Attractive modern apartment with every convenience.” The building was completed in February of 1926, and immediately filled with professionals including Dr. J G Thompson; Jeweler Ned W. Cohen; bridge-maker Ralph P Coble; and Realtor Francis Jordan. The apartments remained occupied for ninety years, though improvements were not made in a comprehensive or aesthetic manner.

In stepped Chris Redmond, a metropolitan DC resident and UNCG graduate. As a big fan of the Gate City’s revival, Chris embarked on a thorough renovation using Historic Tax Credits for income properties by restoring the foundation, the façade, and windows, installing all new plumbing, electrical, HVAC, kitchens, baths, and laundry. Following the Historic Tax Credit guidelines, he restored all original features including hardwood floors, walls, and finishes. His investment has paid off as all units in the quadruplex are rented!

In addition to preservation awards, the organization recognized the work of dedicated volunteers. Barbara Sain was cited for her work in helping to maintain the gardens around the Blandwood Mansion historic house museum. Linda Lane was presented the Volunteer of the Year award for her role in orchestrating the Hillside Designer Showhouse, a transformative event that engaged volunteers and raised critical funds for the organization.