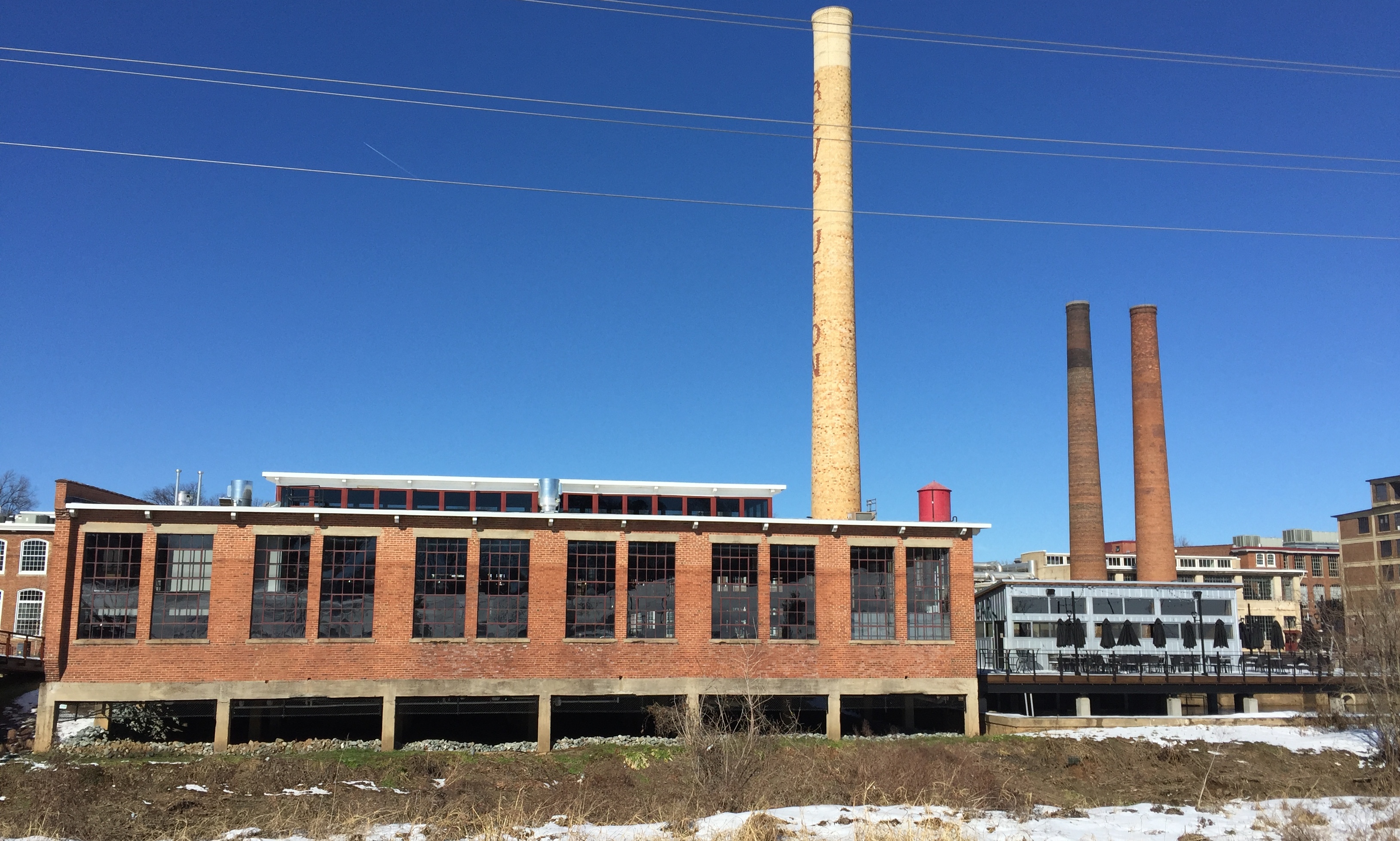 Greensboro’s preservation community gathered on February 7th 2018 to celebrate the past year, and to hear insights on history and architecture by O.Henry Editor Jim Dodson. The group met in a new historical venue – Color Works Meeting Space at Revolution Mill. The meeting was the 52nd Annual Meeting of Preservation Greensboro Incorporated.

Dodson shared memories growing up in the Carolina Piedmont, his early professional career in Atlanta and Washington, and his return to his ’raisins, (those who raised him) in central North Carolina. He spoke about his love of Greensboro, a community he considers to be one of the most diverse and culturally rich in the South.

On April 6 1904, the Greensboro Patriot announced that Priscilla Benbow Hackney “has given a contract for a nice residence on Spring Garden Street.” Hackney was well known in Quaker circles as the assistant clerk of the North Carolina Yearly Meeting of Friends alongside clerk Lewis Lyndon Hobbs. In 1905, her daughter was married to David White by Thomas Newlin, dean of Guilford College, in the residence. Two years later Priscilla left her home to live with her daughter and new son-in-law. The house was sold the following year to Dr. Julian I. Foust, President of Woman’s College (UNCG) for over 30 years. His wife Clora remained in the family home until her death in 1975. The Foust family maintained ownership for the duration of the property’s timeline, through granddaughter Sarah Landry Fiske, until her death in 2016.

The welfare of this house was a concern for preservationists. Recent preservation efforts next door at the Angle House were led by the Preservation Greensboro Development Fund, and pulled that house from imminent destruction in 2015. Fears of demolition of the Hackney-Foust House did not come to fruition, thanks to Renee and Cecil Barker. Using Historic Preservation Tax Credits, they renovated the home’s interior for continued use as apartments and removed unattractive features such as an outside staircase to the second story apartment. Restored details of the project have added considerably to the historic streetscape of Spring Garden Street, with two recently restored houses now standing side-by-side.

On the date 12-12-1912, the Greensboro Patriot revealed that “Mr. and Mrs. E. W. Lyon have moved into their handsome new home in Fisher Park”. The Lyons were well known in Greensboro at the turn of the century, having previously lived in a grand Victorian residence several blocks closer to the city center. Edward Lyon was a mining engineer who consulted on various copper, silver, and coal mines here in North Carolina. He even owned a gold mine near Rocky Mount! The two-story brick house is inspired by the classical architecture of the Colonial Period, featuring a projecting central gable topped by demilune window. By the first decade of the 21st century, the house was in very poor condition, containing years of accumulated items, rotting structural features, and an overgrown yard. Considering the property’s prime location on North Elm Street, the threat of demolition was very real.

In 2016 the house was acquired by Michael and Eric Fuko-Rizzo, who won an award last year for restoring an Aladdin Kit House on West Bessemer Avenue. The pair utilized Historic Preservation Tax Credits to plan a detailed restoration that reconstructed failing structural elements, reconfigured all mechanicals, and made this once dilapidated relic a classic showplace for Fisher Park. The property has since been sold as the Fuko-Rizzo’s have moved to another restoration project in the Julian Price House, known as Hillside.

First Presbyterian Church is one of a quartet of Gate City sanctuaries designed in part by New York City architect Hobart Upjohn.  Across the street is Temple Emanuel (1923), and nearby are Holy Trinity (1922), and Grace Methodist Protestant Church (1925). However, the First Presbyterian Church overlooking Fisher Park is one of the state’s largest and most imposing religious structures. Upjohn worked in coordination with Greensboro architect Harry Barton, a church elder. According to Upjohn, “It is not a replica of any other church, although the cathedral idea is prominent. It is nearer the French Gothic style of architecture that anything else.” The sanctuary for 1,700 people was opened in October 1929. The campus is now nearing 100 years of age, and it needed investment and technological upgrades. Special challenges included the dimension of the interior spaces. The roof of its 160-foot-long nave is topped by carved and painted wood trusses that soar 85 feet above the floor.

The major restoration campaign saw the replacement of the inefficient HVAC and electrical systems, as well as repurposed spaces inside the Smith Building and the Main Building. The Sanctuary was restored with enhanced acoustical and lighting systems. This property has been listed as part of the Fisher Park National Register Historic District listing since 1991.

The Revolution Mill is one of the most important industrial complexes in North Carolina. It has the distinction of being the first modern flannel mill in the American South, and by the 1930s, the mill was the largest exclusive flannel producer in the world. Most of the buildings related to the Revolution Mill complex were erected in three major periods of expansion dating to 1900, 1904, and the final stage in 1915. Construction methods and floor plans of the mill are typical of textile plants built during the period, with massive wood beams and large windows for natural light. In 1923 outbuildings were added to the property for cotton storage and shipping. Operations ceased in the complex in 1982 and it was placed on the National Register in 1983.

Picking up on earlier restoration efforts by Self Help Credit Union and architect Eddie Belk, the proprietors of Natty Greene’s continued the creative reuse of the cotton storage and shipping outbuildings as Natty Greene’s Kitchen + Market. Opened in 2017, the restaurant includes multi-level spaces, exposed utilities, and an innovative flood protection system. The project leveraged Historic Preservation Tax Credits and was approved for recognition as the 100th Guilford County Landmark by Greensboro City Council in 2016.

The Hartsook House is a part of the Hendrix Family compound that extends along Hendrix Street from Church Street eastward to Yanceyville Street. Clara Katherine Hendrix was the daughter of Charles A, Hendrix, whose Neoclassical house still stands on the northwest corner of Hendrix and Yanceyville streets. In 1909 she married Charles Henry Hartsook, a salesman for the Peters Cartridge Company. In March 1910, Clara purchased this lot from Caesar and Jeanette Cone for $600 and in September, the Greensboro Record announced the issuance of a building permit for a $2,000 residence to C. H. Hartsook on the property. In 1917 the Dutch Colonial-style house was sold to the Medearis family. The Ricks-Donnell & Medearis Company was well-known for menswear in the first decades of the twentieth century.

In 1989, the North Carolina Children’s Home renamed the house the Harriet L. Tynes Office Building in honor of the organization’s Director from 1944 to 1968. In 2016 the house was sold to the New South Associates, Inc. a women-owned small business that was incorporated in 1988 to provide cultural resource management services.  Interior renovations included carpet removal, floor refinishing, new paint new HVAC systems, and reconstruction of the entire front porch. Exterior work on the Dunleath-neighborhood home was completed by Pam Frye as the general contractor.

The Green House appears to have been erected between 1902 and 1904, on land acquired in 1892 by Frank G. Chilcutt of Brown Summit. Chilcutt built a number of houses along Keogh (today’s Eugene) Street, and it appears that his sister Mary Jane Green moved into one of them when her husband died – perhaps motivated to raise income for her family. She operated a boarding house in her home, where she lived with her two daughters Carrie and Nannie. Infamously, a boarder named Worrell died of Typhoid fever here in 1905. The victim was from Fayetteville, but he refused to tell anyone about his personal history or how he got Typhoid, which fueled the gossip in the community. The Green family remained owners of the house through 1948.

After the house was acquired by Kate and Tim Tobey in 2015, many architectural misdeeds were undone. The two-thirds width front porch was restored, the historic windows were retained, and the false siding and shutters were removed. The central second floor window was restored to full dimension, and the entire façade was given a new paint job. Fisher Park neighbors are grateful for the Tobeys’ attention to historical details, especially considering the home is located just outside the local historic district and its respective design review.

Three individuals were recognized for their volunteer work with Preservation Greensboro.

Judith Cushman-Hammer was named the Blandwood Volunteer of the Year. Over the past two years, Cushman-Hammer thoroughly researched key pieces in Blandwood’s decorative arts collection, uncovering previously unknown historical connections with furniture-makers and locating missing pieces to Blandwood’s collection. Blandwood is now owned and operated as a museum by Preservation Greensboro. It is located at 447 West Washington Street in downtown Greensboro.

Sara Sears was selected as Preservation Greensboro’s 2017 Volunteer of the Year. Sears began working with the organization in the 1970s and served in numerous roles with the Blandwood Mansion Guild of volunteers. In 2003 she and her husband acquired a Mid-Century Modern-style Edward Loewenstein House, and restored it. In 2005 they agreed to open it to the public for what is considered the first Modernism Tour in North Carolina.