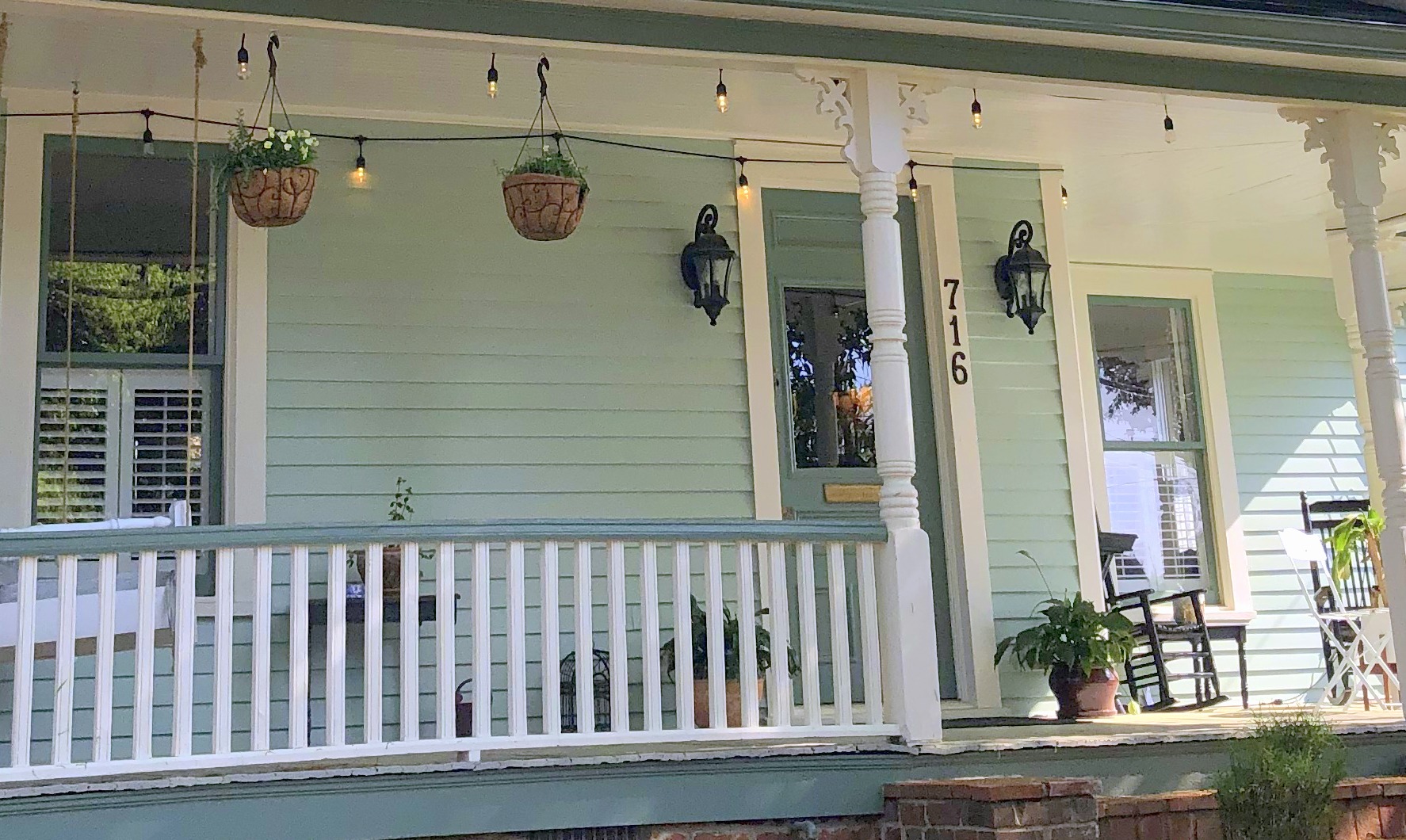 The Queen Anne-style house at 716 Walker Avenue was built in 1902 and is typical of upper-income residences of the period in Greensboro. The house was commissioned by Laura Brockmann, who resided in the house with her sister, Emma. Brockmann is remembered today as for her dedication to music and for her role in strengthening the music program at nearby UNCG. It is under consideration for designation by Greensboro City Council as a Guilford County landmark property.

Walker Avenue thoroughfare was planned as early as 1873, when landowners Eugene Morehead, William Jackson, and Jacob B. Balsley arranged for a united street plan for their large tracts just west of Greensboro. Surveyed in 1883, the central avenue of this Victorian Era subdivision was named in honor of Eugene’s eldest sister and her husband, Letitia Morehead Walker and William Walker. By the turn of the twentieth century, Greensboro residents were commissioning some of the grandest expressions of Queen Anne architecture in the city.

As the avenue grew to become a prestigious address, those in the city’s cultural and intellectual circles were drawn to add their own homes to the suburban setting. Such was the case with Laura Brockmann, whose Queen Anne house is typical of upper-income residents of the Victorian Era in Greensboro, survives today as an outstanding example of its type in the city.

Laura L Brockmann (1863-1943) was born in Greensboro to German-born parents Captain August Julius and Bertha Raven Brockmann of Hanover Germany. Augustus served in the German Navy before he and his family immigrated to North Carolina where he was a merchant and cigar-maker. The Brockmann family included seven children: John, Emma, Edward, Laura, Charles, Augustus, and Frank.

The Brockmann family held a high profile in Greensboro for their musical talent. Laura was a prominent musician who began her career as a music teacher in 1880. In 1885 she moved to San Antonio, Texas where she remained for two years, and then spent time in Germany before returning to Greensboro as principal of the Greensboro School of Music by 1893, later known as the Brockmann School of Music. Laura provided instruction with a specialty in piano and harmony. Her brother, Charles, was a musician, a music teacher, and ran a music store in Greensboro. Laura was the third president of the Coney Club, a women’s music organization founded 1889 on the campus of Greensboro College. Renamed the Euterpe Club in 1894, the organization is the oldest federated music club in continuous existence in the Southern United States.

By the late 1890s, Greensboro citizens enjoyed concerts of the Brockmann Orchestra at their School of Music. The performance promised “to give the people of Greensboro some good music – not classical selections, but music that will be appreciated by all who hear it.”

With the opening of the fall term in 1899, State Normal and Industrial College President Charles D. McIver announced “Miss Laura Brockmann will have charge of the instrumental music and will give lessons in her studio in the main college building instead of in a private studio near the State Normal and Industrial College as hereto.” By the fall semester 1900, her brother Charles followed, and the pair expanded the college department – including the assembly of the first university orchestra.

On the 20th of May 1902, the Morning Post of Raleigh announced that “contracts were signed Saturday for the erection of (a) handsome residence…for Miss Laura Brockman on Walker avenue.” The house is a candidate to be a commission of architect Orlo Epps, who lived a few houses west at 8-08 Walker Avenue.

By 1910, the first census report that provides insights on Brockmann’s household, reported that she lived with her sister Emma and a white servant named Anna Lemons. Both lady’s ages were conspicuously (and charmingly) left blank. Laura was identified as the head of the household, and both were single. Laura was annotated as the self-employed owner of a mortgage free home.
Her health might have been a factor in several respites from Greensboro beginning in 1910. In 1912 she spent the winter in Lakeland Florida and in January 1913, an announcement in the Greensboro Record stated “Miss Laura Brockmann has sold through the Ham Real Estate Company to Mr. G. B. Royster, of Oxford, her home place at 716 Walker avenue.” She moved to Lakeland, returning to Greensboro in her advanced years where she resided in the home of her brother Charles at 212 South Mendenhall Street. She died there at the age of 80.

The house passed through a number of families until it was converted into three apartments in 1950. In 1996, the dilapidated structure was condemned by the city, then placed on the market through the Redevelopment Commission of Greensboro. The work of the Commission was funded by a citywide bond vote in 1990 that provided $2 million to buying substandard historic houses in College Hill. Buyers would receive low interest loans to facilitate private investment to finance restoration. The Brockmann House was part of the program and was sold to Donna and Buddy Moore with requirements to rehabilitate the house for single family and owner-occupied use for 15 years.

The present owners acquired the Brockmann House in 2020. They have enhanced historic features and restored some of the treasured details, such as a stained-glass transom in the front entryway that was curiously removed and rediscovered in the garage. The transom is thought to be an original feature commissioned for Laura Brockmann that incorporates musical themes such as a stringed lyre and a treble clef! Brockmann taught piano in the front parlor, and the musical themed transom window would have greeted students as the entered the home and continued to the piano. The parlor and Brockmann are represented in an unusual early image of a Greensboro home interior (image, right) that is part of the collection of the Greensboro History Museum.

In 2021, the house was opened to the public as part of Preservation Greensboro’s Tour of Historic Homes & Gardens.

The application for the Brockmann House to be recognized as a Guilford County Landmark property was reviewed by the Guilford County Historic Preservation Commission in May. The Commission made a recommendation to the Greensboro City Council for approval of the application based on the integrity of the house, its associations with Women’s history, and its significance within the College Hill neighborhood.

Special thanks to Gate City Preservation for researching the history of this house.

A Review and Appreciation for the Past Year
December 15, 2020