The Grand Architecture of Richard Gambier 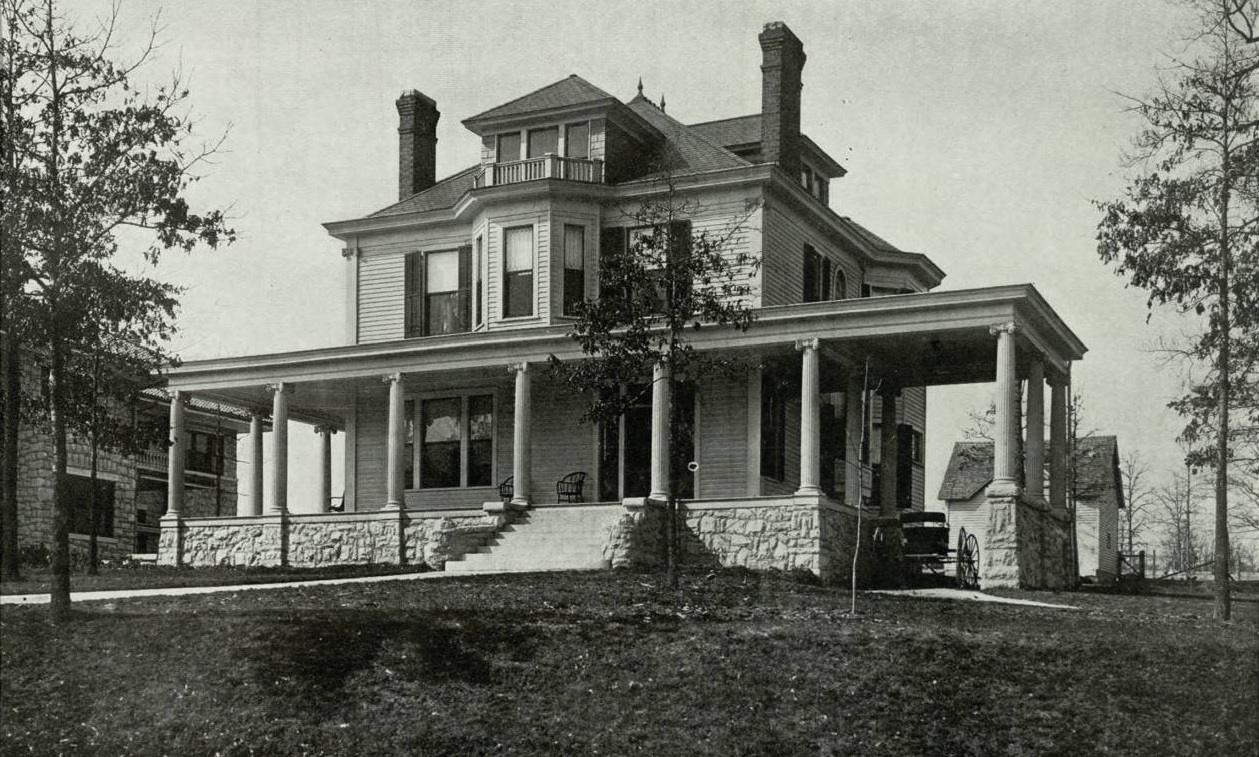 Few among Greensboro’s preservation network have passionate associations with the architect Richard Gambier. However, any student of Greensboro’s historic architecture will know of his work – a portfolio of projects that include Gate City landmarks that are some of most celebrated places in our region.

Information on Gambier can be gleaned from census data, City Directories, and a newspaper articles. Richard Bernard Gambier was born on the 31st of January, 1875 in Paris, France. He immigrated to the United States in 1891 and became a naturalized U. S. Citizen in 1893. His World War I registration describes him as short in stature and of medium build, with brown eyes and black hair.Nothing is known of Gambier’s life upon arrival in this country, until he was referenced in an article in the Durham Sun (North Carolina) on June 5th 1899. The article states:

“Mr Richard Gambier, who has been in Durham for sometime, expects to leave next Friday for New York, and from there will sail for London, and then go to his old home at Paris. Mr Gambier is a French architect of considerable note.

He goes to Paris to make arrangements to act as interpreter and guide for North Carolinians during the coming exposition. He is thoroughly acquainted with that city, and will arrange board, lodging, etc., for all who desire to attend the exposition and may wish his services.

Mr Gambier will take an advanced course in architecture while in Paris. After the exposition closes he will return to North Carolina and make his home here.”

In later census date, he reports that he completed one year of college. Perhaps this Parisian excursion was the extent of his formal education.

The 1899 Durham City Directory records “R. Gambier, 14 Wright Building, architect.” No other references related to his time in Durham is yet discovered.

Gambier is next referenced in Mobile, Alabama. The Mobile City Directory, for the year ending February 1, 1905, reports Richard Gambier practicing as an architect from Office 214 in the Pollock Building. A portfolio published years later illustrates a commission he received in Mobile for a residence under the name L. M. Moraques. Luis Marty Moraques was a Vice-Consulate for Spain during the first decade of the twentieth century. Perhaps while Gambier was living in Mobile, he met Marie Catherine Morehouse of New Jersey. The two married in New Orleans on February 27, 1903.

The first reference to Gambier in Greensboro is February 2, 1906. Why he chose Greensboro is not known. The Greensboro Daily News displayed an advertisement for “Richard Gambier, architect and superintendent, plans and specifications on all class structural work. Office, Room 260 Benbow Arcade.”

Upon his arrival in Greensboro, Gambier began one of the most prolific periods of his professional career. Greensboro was growing rapidly during this period, its population leaping 50% from 10,035 in 1900 to 15,895 in 1910. New residences were being erected along Summit Avenue, in Fisher Park, and in Glenwood. He joined the Chamber of Commerce in June 1907.

A procession of clients signed up for his services. Perhaps his earliest commission was announced in May of 1906, as Ernest Clapp began construction on a residence at 604 Summit Avenue. Clapp ran for – and ultimately was selected as – clerk of the Superior Court of Guilford County at the time of the announcement. Richard Gambier was referenced in a news report as the project’s contractor. The style of the house was unusual in Greensboro and it stands among the earliest examples of a gambrel roofline in the city. The high front gable towers above neighboring houses, and walls of the residence are decorated with a combination of clapboard and shingles. Other unusual features include flat roofed porches supported by Tuscan columns, topped by a full entablature, and a balustrade. Interior features include a large entry room right-of-center with a grand staircase, quarter-sawn oak floors and trim, pocket doors, and an assortment of Art Nouveau and Neoclassical mantels. The house is listed on the National Register of Historic Places, and was showcased as part of the 2011 Tour of Historic Homes & Gardens.

In 1907, Bertie and Lee Briles commissioned Gambier to design for them a “Southern Colonial Mansion” on High Point’s North Main Street. Briles was vice president of the North Carolina Savings Bank and Trust Company, and the newlywed couple promised “Architectural symmetry of the exterior, and beauty of finish of the interior will characterize this modern home” according to a newspaper reference. The two-story frame house features a Mount Airy Granite foundation with grapevine mortar, a monumental two-story Ionic portico featuring paired columns, a porte-cochere, and a second story balcony. The main entrance to the house is composed – and is surround by – beveled leaded glass with a floral pattern centered upon an abstracted face. The interior contains a generous entrance room with grand stair, quarter-sawn oak floors and trim, pocket doors, and Neoclassical mantels The house is listed on the National Register of Historic Places, and is today the home of the Junior League of High Point.

That same year, Gambier earned another important commission, that for the insurance executive George Grimsley. Located at

408 Fisher Park Circle, the Neoclassical Revival house overlooked Greensboro’s Fisher Park (image, header). The two-story frame house features a Mount Airy Granite foundation with grapevine mortar, and includes a broad porch of Ionic columns that engaged a porte-cochere. A high, hipped roofline is pierced by hipped dormer windows and tall corbelled chimneys. Key features of the interior include sidelights and a transom of beveled leaded glass, a bay window, and other features that are variations of themes described in the Clapp and Briles houses. The house is listed on the National Register of Historic Places, and is also recognized as a Guilford County Landmark Property.

Gambier designed over a dozen commissions in and around Greensboro that ranged from simple frame Foursquare residences to apartment buildings, and even an unrealized office tower. He may have had professional associations with local craftspeople such as Slovakian stonemason Andrew Schlosser and High Point’s Alsatian glassmaker Ferdinand Ecker. A majority of his designs were destroyed in the mid-Twentieth century. Other homes are not identified as Gambier designs, but continue his architectural and spatial themes. The 1909 Ferdinand Ecker House at 901 Johnson Street in High Point, and the 1912 McAdoo-Sanders-Tatum House at 303 Wentworth Drive in Greensboro are attributed to Gambier through their features and materials.

An article in the Greensboro Daily News in September 1907 reported on the delay of area construction projects due to the lack of building materials. The article stated “Richard Gambier, the architect, is superintending the construction work on the Jones & Taylor building at the corner of North Elm and Gaston streets, the work on which has been delayed by the failure of the structural iron manufacturers to deliver the contracted material on time.” Conveniently, the article lists several of Gambier’s other projects. “Work on the C. W. Jennings apartment house in West Market street has been delayed for practically the same cause” the report says. “Mr. Gambier is also drawing plans for residence to be erected for G. A. Grimsley, of the Security Life and Annuity Company, and in addition to these undertakings, is completing the work on a residence at High Point for Lee. A. Briles, costing about $14,000.”

By 1910 Gambier and his wife Mary (listed as Marie) were lodged with the Pearce family in their home at 218 East Market. The couple acquired residential building lots in the Piedmont Heights section of Glenwood in 1910, but the lots were sold five years later. Around 1912, a portfolio was published featuring examples of Gambier’s work. Little would be know of his work in the Gate City without this document.

Gambier’s good fortunes turned when the frenetic pace of construction in Greensboro began to slow in the mid-1910s. In addition, his reputation might have suffered from a legal tussle with a local attorney Ashbel B. Kimball. Heard by the North Carolina Supreme Court, the case of Richard Gambier v. A. B. Kimball was filed 22 April 1915 as an action brought by Gambier to recover the contract price for plans and specifications furnished for the design of a residence for Kimball. Gambier alleged a balance of funds due to him were denied by the defendant. Kimball argued that he commissioned plans for a house estimated to cost about $9,000, and Gambier did not fulfill that service.  A jury found Gambier was entitled to recover $370. In a town the size of Greensboro, such a footnote to an architect’s reputation could be harmful.

With the start of the World War in Europe, Gambier began to shift his time back and forth from Greensboro to Wilmington. In September 1919, he lived with his wife at 15 South 8th Street in Wilmington where he was employed as a General Superintendent with the Liberty Ship Building Company. By January 1920, the couple was listed by the U. S. census to be back in Greensboro, boarding in a home at 118 Bishop Street.

Gambier took a position by 1920 as a heating engineer with Burt McKenzie. By 1922, the couple relocated to Tampa, Florida where they apparently lived a quiet life. Marie died in 1931, and Gambier took a position as a general foreman for the Works Progress Administration. He worked there as late as 1940, while residing at 317 Magnolia Avenue in Tampa. He died in there in September 1962 and was buried in Myrtle Hill Memorial Park, in Tampa.

Richard Gambier crossed the Atlantic to start a new life in the United States as a young man. Here, he found a wife, and realized a career as an architect with clients in several cities such as Mobile and Reidsville. However, his most productive years were here in Greensboro where he earned commissions for impressive homes with sophisticated designs of Neoclassical themes. In doing so, he left a lasting impression in the city’s architectural landscape – with surviving examples enjoying an increasingly celebrated profile in the twenty-first century.

Did you enjoy this article? Are you a member yet? Learn more about Greensboro’s only member-supported preservation organization by exploring this website or joining our Facebook page. Please contribute today!