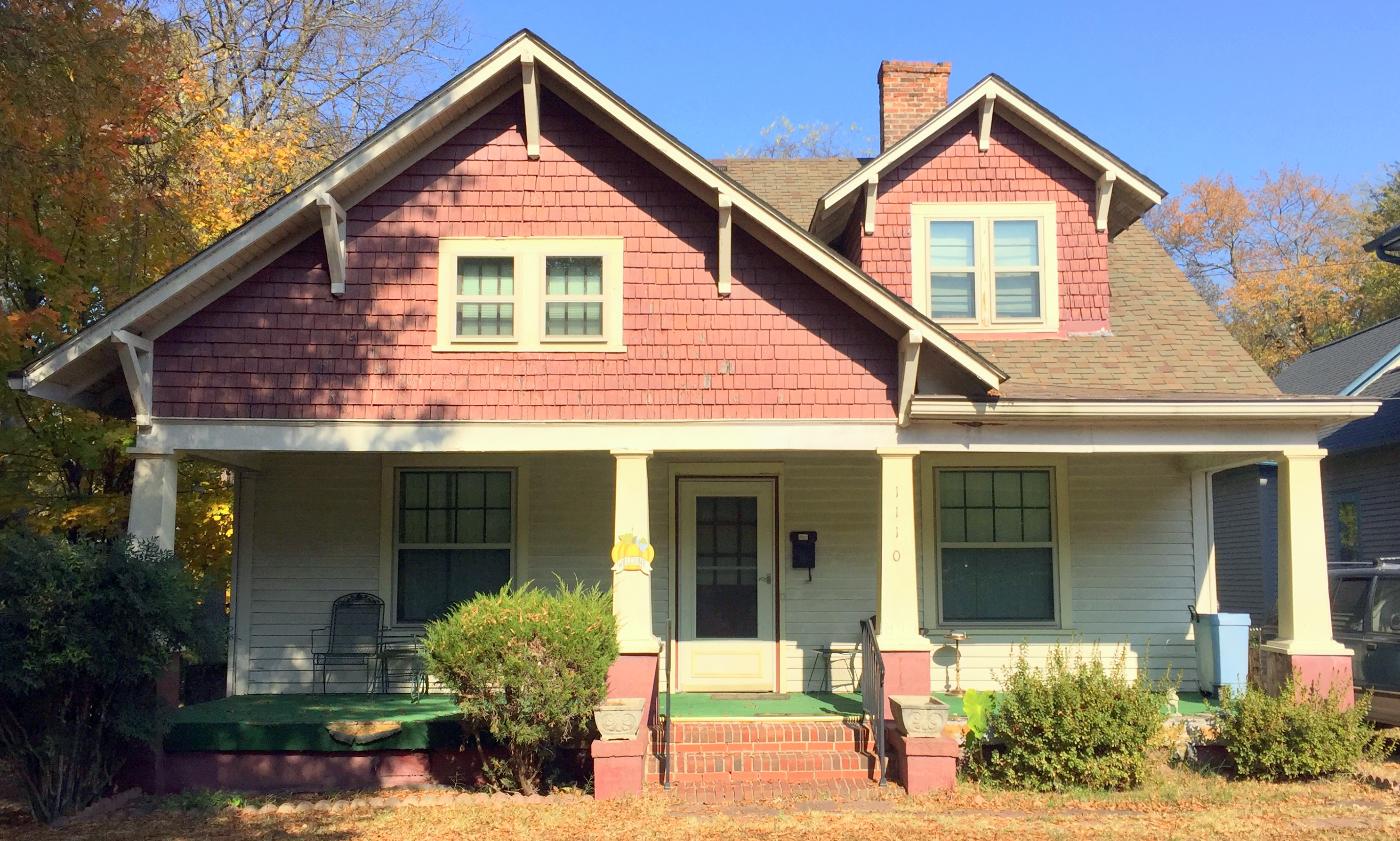 The Booker-Benton House is a rare surviving structure built by an African American family at the height of the Jim Crow Era, in the midst of the historically white College Hill neighborhood.

The early history of the house centers on Julia Booker and her daughters Mattie and Louie. Julia Forney Booker was born around 1866, She raised four children by her husband Nathaniel Booker: Mattie, Louie, Henry, and Arthur. They lived in a house she owned at 953 McGee Street in the College Hill neighborhood. Julia was a capable woman who was widowed early in life. In spite of hardships presented to black single mothers at the turn of the twentieth century, she was able to read and write, and owned her home free of mortgage. That early home was destroyed many years after the family moved away, but it represents the deep roots Julia had in the College Hill neighborhood.

Booker-Benton House in the mid-1970s, courtesy of the City of Greensboro

Julia took a position as a cook for Lula McIver, the widow of UNCG’s first president Charles D. McIver. As her children grew, she made sure they were educated and capable. Eldest daughter Mattie learned cooking techniques from her mother, and was later employed as a cook with Dr. Anna Gove, UNCG’s resident physician, professor of hygiene, and director of the Department of Health. Mattie’s sister, Louie, was employed at the Greensboro City Health officer as a nurse and is remembered as one of the city’s first black licensed nurses.

In 1919, Mattie and Louie purchased the lot at 940 McGee (later renumbered to 1110 McGee Street). Julia, Mattie, and Louie are all listed at the address in the 1923 City Directory, indicating their residence was completed by that time. The Craftsman-style bungalow was stylish, incorporating a theme of Asian architecture that is exemplified in the low pitched roofline, wide overhanging eaves, and exposed structural timbers such as rafter tails and knee braces. The sisters remained in the house after the death of their mother, Julia, in 1927. The sisters shared ownership of the house until their deaths. Louie Booker married Oscar Benton in 1935, and the house remains in the Benton family today through Oscar’s son Ted. Ted was employed as operations manager of the federal courthouse in New York City before retiring and returning to Greensboro in the 1990s.

The 1100 block of West McGee Street was an African American enclave within a largely white neighborhood. It developed as a community of narrow streets that extend to the primary thoroughfares of the city. Edgar Street takes the appearance of an unpaved alley, but historically it served as an access to connect northward to West Market Street. McGee Street continues eastward from the settlement past Blandwood Mansion and has been extended to South Elm Street.

After the Civil War, African-American citizens sought to avoid high costs of land by living in the area alongside and behind the white-owned homes of South Mendenhall Street.  Some of these early residents purchased land from Cyrus P. Mendenhall, once mayor of the city and a Quaker. Others rented their homes.

Illustrative of this group of African American residents was Lithia Brooks, born in 1835, who was employed as a launderer. She rented a small house at 438 South Mendenhall Street. E. S. Robinson lived on McGee Street and was employed as a college janitor. Morrison Morrow is presumed to have been born into slavery in 1845 and purchased a small ¼ acre tract of land in 1870 on Rankin Street on which he built a modest home. None of these homes survive today.

During the Jim Crow Era of racial segregation, black residents in the neighborhood began to decrease in numbers as renters and homeowners relocated to traditional African American neighborhoods such as East Greensboro. Their modest College Hill homes were sometimes destroyed to make way for larger white-owned homes. By the 1970s, less than ten structures with African American associations remained in College Hill. All but one of those structures were raised to make way for condos by the Greensboro Redevelopment Commission in the early 1980s. The Booker-Benton House is likely the sole survivor.

In August 2000, Greensboro News and Record writer Jim Schlosser profiled Ted Benton, who was recognized alongside his wife as “the only black residents left in what used to be a thriving black community.” Schlosser wrote, “By the early 1980s, many of the houses in the block were old and run down. The city’s redevelopment commission began buying and demolishing them. Only Benton’s house, which his parents owned at the time, and one other were spared.”

Special appreciation to Ray Benton for providing history of this house.