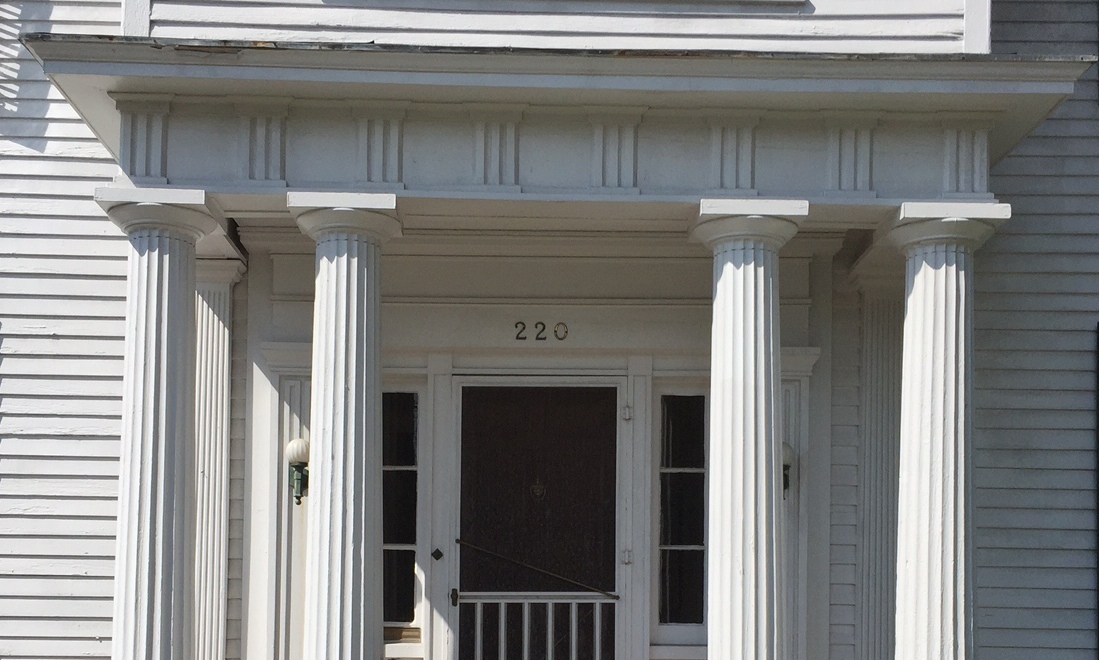 The residence at 220 West Fisher Avenue in the Fisher Park Historic District has long been recognized as a landmark for the neighborhood. Further research reveals that its past is deeply connected the history of Greensboro.

The grand two-story white frame house was constructed for Vivian and Joseph H. Armfield in 1915. Vivian Pegram (1888-1976) was a Guilford County native, and daughter of Anna and J. M. Pegram. In 1908, 19 year old Pegram married Greensboro’s Assistant Postmaster Joseph H. Armfield (1876-1949). Joseph Armfield was the son of Esther and George Williamson “Will” Armfield, of Greensboro.  Joseph’s father, Will, was a prominent merchant in Greensboro who began a career as an architect late in life. His store was in the storefront known today as the Vernon Building at 238 South Elm Street, which he likely designed in 1883. Beginning around 1900, he began to promote his talent as a contractor and architect in Greensboro City Directories.

As an architect, Will Armfield was awarded several prominent commissions, including the Harden Thomas Martin House (1909) at 204 North Mendenhall Street and Alumni Hall at the Oak Ridge Military Academy (1914). Armfield family oral history recalls that Joseph served as a contractor alongside his father as architect. The father and son pair were responsible for several residences around the city, though not all have been identified or documented.

Joseph Armfield acquired a large double lot in 1907 at the corner of West Fisher Avenue and Simpson Street, and logically, when Vivian and Joseph Armfield were married in 1908, they moved into a house designed by Will Armfield. The Neoclassical Revival residence was erected on the easternmost portion of his lot that took the street number of 210 West Fisher Avenue. Still standing today, the house is said to have been constructed by the father-son team. The one-and-a-half story house features a forward gable roofline and a wrap-around porch that curves around the façade and is supported by Corinthian columns.  Vivian and Joseph’s son, Joseph Jr, was born in the house in 1909.

An article in the November 2nd 1915 edition of the Greensboro Daily News reviewed building permits issued in the city for the previous month. On October 1st, it was noted that “J. H. Armfield was issued a permit for a two-story residence on Simpson Street, with an estimated cost, $3,500.” Though the double lot acquired by Joseph in 1907 was initially oriented to Simpson Street, Armfield reoriented his new home on the westernmost portion of his lot to West Fisher Avenue, so that it stood alongside his earlier home next door at 210 West Fisher Avenue.

The new home that was constructed by Will and Joseph Armfield was quite unusual for Greensboro. Many elements of the 1915 Armfield House were reused from a much older structure named “The Elms.” The Elms was constructed around 1856 by Nancy and Cyrus Pegg Mendenhall. Cyrus Mendenhall (1817-1884) grew up in nearby Jamestown, the son of Mary Pegg and Richard Mendenhall. Richard erected a substantial two-story brick residence around 1811 on West Main Street in Jamestown. The house stands today as the Mendenhall Homeplace, a landmark of Guilford County.

As his boyhood homeplace was a landmark in Jamestown, Cyrus Mendenhall erected a landmark for himself on the primary street leading south from Greensboro. The Elms maintained a prominent site in Greensboro in the decades after the Civil War. Not only was it the residence of Greensboro’s mayor (1874-1876), but the design of the residence was influenced by a notable nineteenth century publication.

The Elms was a two-story, five-bay frame structure, with end gables and end-chimneys. Centered upon the façade was the main entry, sheltered by a Greek portico. The portico and the doorcase were based on Plates 4 and 28 of the publication entitled The Architect, or Practical House Carpenter by Asher Benjamin. Published as early as 1830, the guide book was a touchstone for builders across the country who sought advice in detailing popular Greek and Roman moldings compositions. For Mendenhall, the book likely influenced decisions on proportion, form, and geometry of his grand Doric facade.

Mendenhall’s The Elms was not the first structure in Guilford County to follow protocol provided by Asher Benjamin’s publication. Simplified Greek forms were used to decorate the main entryway of the William Paisley House that once stood on West Market Street (now located at 409 Hillcrest Drive). Another important Greek Revival House was constructed a few doors down from Cyrus Mendenhall’s boyhood home in Jamestown. The house, occupied by Shubal Coffin House, was likely remodeled in the Doric Greek style after an 1837 tornado, using features that were inspired by Asher Benjamin.

As the village of Greensborough grew into the city of Greensboro in the 1880s, commercial development closed in around the 13-acre estate. The Elms stood on South Elm Street, halfway between the Guilford County Courthouse and the railway depot on highly desirable land. The house and property were finally sold by Nancy and Cyrus’ daughter Judith Mendenhall in 1891.

On June 13, 1894, The Greensboro Patriot reported that “The work of moving the old Mendenhall property back off South Elm street has begun and a new brick building will soon take its place.”  The Elms took a new location roughly 400 feet west at the corner of South Greene and West Washington streets. The location is currently a parking lot adjacent to the Carolina Theatre. The Elms was rented by a series of occupants, including J. A. Wright, however, by 1914 the property was vacant.

Will Armfield and his family were likely extremely familiar with the architecture of the 1856 Elms.  The family lived just a few lots away on South Ashe Street (today Federal Place), and his store on South Elm Street was just a few doors north of the house. As an architect, he might have appreciated the Neoclassical features prescribed by Asher Benjamin nearly a century earlier.  Regardless of the motivation, the Armfield family salvaged numerous features from the old Elms, including window frames and sashes, the front portico and the doorcasing.

Will Armfield used these elements to compose a Colonial Revival-style residence or his son and daughter-in-law.  The new symmetrical façade was composed of five bays of reused windows within a main block that was flanked by side wings. The center of the façade featured a projecting pavilion that showcased the Doric Greek portico of the 1856 Elms. The third floor was enclosed beneath a gambrel roofline with oversized dormer windows. The house remains much as it looked when constructed, and stands as an unusually early example of Colonial Revival architecture in Greensboro. It was erected a time the style was just gaining traction in the city, and within a few years, numerous Colonial Revival houses could be found lining the streets of Fisher Park, Irving Park, Westerwood, and Sunset Hills.

Ironically, the year 1915 was significant to Will Armfield in ways beyond the design and construction of his son’s grand home. On April 12, 1915 five members of the American Institute of Architects (AIA) gathered for a meeting in Raleigh, NC at the office of the Secretary of State. There, members were administered an oath for the duties associated with the creation of a North Carolina Chapter of the AIA. Through this organization, architects could apply to the Board for a professional license. North Carolina’s first licensed architect was G. Will Armfield from Greensboro!

Perhaps the 1915 Elms is the first building in North Carolina designed by the hand of a licensed architect. Today it remains a private residence prominently sited overlooking Fisher Avenue. Will Armfield died in 1927. The Armfield family remained in the house after the deaths of Joseph and Vivian. Joseph Jr. and his wife Elizabeth then resided in the house and it remained in the family until 2009.