The Secrets of Westerwood 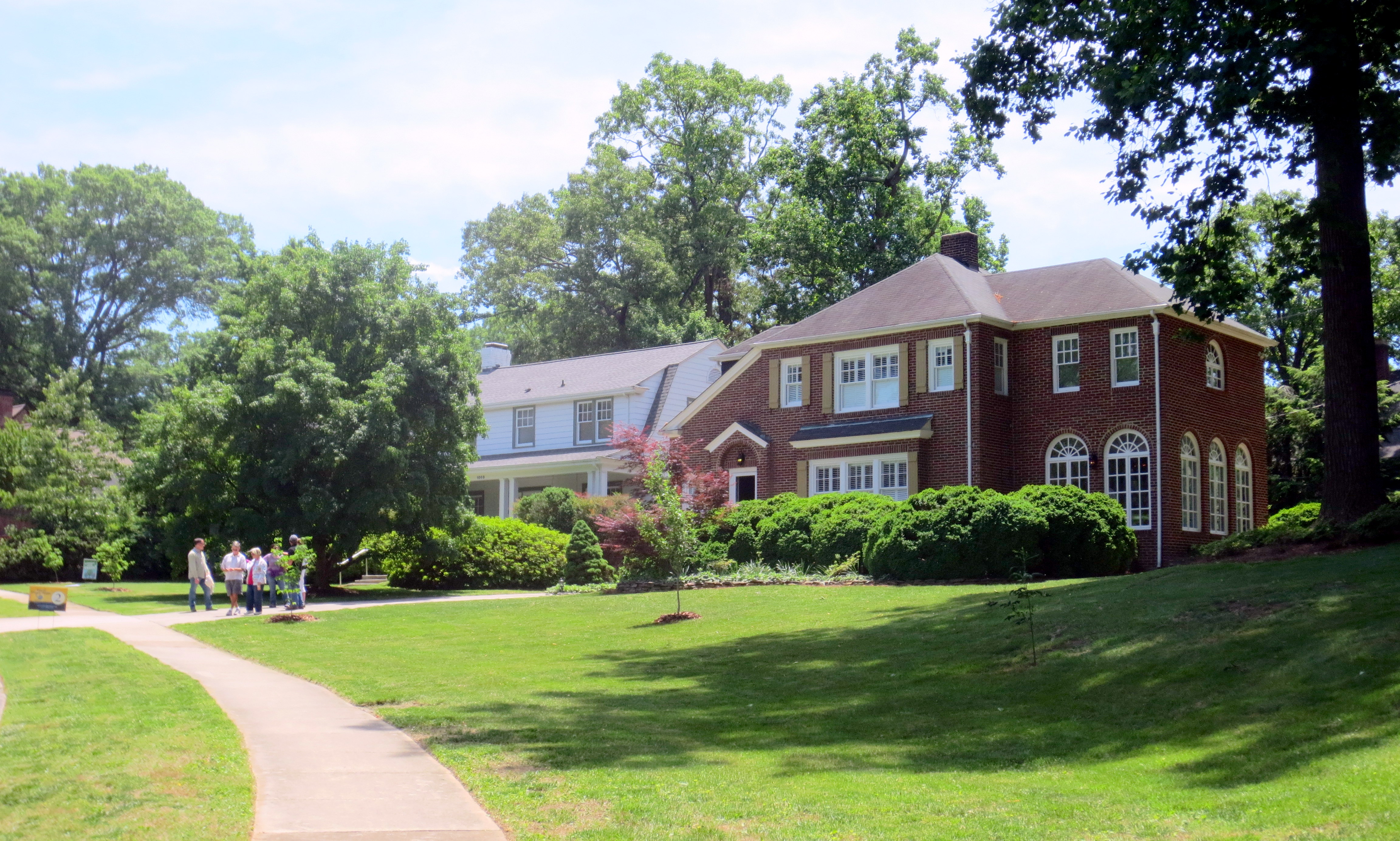 Westerwood today is a stylish neighborhood of comfortable and well-constructed homes that is convenient to nearby colleges, shopping, and downtown Greensboro. The neighborhood dates to the late nineteenth century when “Greensborough” began to expand to a ridge north and west of the small town. The high prospect of land captured the attention of high-income residents who built estates, which gave way to later subdivisions of lowland parks and early twentieth century housing stock.

Early maps of Greensboro indicate a grand home on a bluff just northwest of the village of Greensboro named The Cedars. The Cedars was built around 1897 and are reported to cost $5,800 to $6,000 to build. The impressive estate featured an exuberant Queen Anne style house with multiple porches and gables that stood amidst groves of trees and broad lawns.  Knoxville, Tennessee architect George F. Barber drew the design. Upon completion, the house was among the grandest expressions of high-style Queen Anne architecture that ever stood in the city (image, right).

The commission for The Cedars came from Branch Hugh Merrimon and his wife Nellie Scales. Merrimon was a native of Asheville, but attained interests in real estate, industry, and politics by 1897 when their house was complete. The Greensboro Telegram reported “B. H. Merrimon is moving today into his new and elegant residence at the intersection of Mendenhall and Guilford avenue.” Eight of the eleven Merrimon children were listed at the home in the 1900 census. Two more were born after 1900!

Dr. John Thomas Johnson Battle and his wife Dora Burns were the second prominent citizens to live in The Cedars. Dr. Battle was a native of Wake Forest and graduated from Wake Forest College and from the College of Physicians and Surgeons in Baltimore. In 1898 he and his wife moved to Greensboro and established his medical practice. He held a high profile in matters of health and hygiene, serving on the State Board of Medical Examiners, the Guilford Board of Health – the first County Health Department in the state, second in the nation. He was also among the first in Guilford County to own an automobile!

As The Cedars rose atop the bluff, other residences were constructed along Guilford and Mendenhall streets in the late nineteenth century. The Augustus A. Chandler House at 408 Guilford represents this period of construction. Constructed in 1898, the house features a vernacular “gable and wing” form that is embellished with a Queen Anne porch with turned supports and sawn brackets in addition to shingle-work, and a dentil cornice.

Another early enclave of residents settled around St. Paul’s Methodist Episcopal Church at 710 Guilford Avenue. This was an African American community, of perhaps 100 residents, who lived in frame cottages erected as early as the 1880s. John and Fannie McCauley are typical of these residents. The couple moved to 729 Guilford Avenue around 1890 where John served as the sexton of St. Paul’s church. Little of this early African American community remains today.

In 1908, Hardin Thomas Martin announced the construction of his $10,000 residence at 204 North Mendenhall Street. Designed by Will Armfield, the Neoclassical Revival residence features a Mount Airy Granite foundation, wrap-around porch and portico of Ionic fluted columns, bowed windows, and a high slate roof topped by a widow’s walk. The house quickly joined The Cedars as an icon for the neighborhood (image, right).

The Cedars estate was subdivided by Brown Real Estate Company in 1910 as a neighborhood that took the estate’s name. Charming bungalows rose along Mendenhall, Courtland, and Hillside streets. The charming bungalow built in 1920 by contractor Reginald H. Starr at 606 Courtland represents this period. The craftsman bungalow features milk-quartz porch supports, a cut-away bay window, and exposed rafter tails and knee-braces beneath its eaves. The Battles sold their mansion in 1918 and the home was destroyed in the early 1960s to be replaced with an apartment complex at 610-614 Fairmont Street.

Beginning as early as 1891, developers subdivided large tracts of land west and south of the Cedars. These initiatives included The Highlands, later rebranded as Oakland Park. Though some lots were sold at a lazy pace, the largely unsold subdivisions attracted the attention of A. K. Moore, the newly hired and energetic treasurer of Guilford Insurance and Real Estate Company. Moore saw opportunity with veterans returning home from the Great War in Europe and acquired Oakland Park and The Cedars in 1919.

Moore was a proficient salesman who excelled in marketing real estate. He immediately renamed the streets of the previous subdivisions through a public contest. The results were announced in the newspaper in October 1919: Nickols Avenue was changed to Crestland Avenue as suggested by Mrs. R. D. Douglas of Fisher Park; Haywood Street took the name Woodlawn Avenue as suggested by H. K. Williams of West Friendly; Wild Rose Street became Hillside Drive by suggestion of Miss Emma King of UNCG; Tamarac Avenue became Courtland Street thanks to Mrs. R. H. Newton of College Hill; and Bellemeade Street became known as Fairmont Street by submission of Miss Carrie Newton of College Hill. The entire neighborhood was rechristened Westerwood (image, right).

Perhaps no greater interest has ever been aroused by the development of a residential section in Greensboro or environs than that which the people of the city are experiencing in Westerwood, the new development of the Guilford Insurance and Realty company. A few days ago the company announced that the first home sites in Westerwood were ready for the market; and the activity that the company’s office has experienced since then affords ample proof of the enthusiasm of Greensboro people over the new residential section opened to them.
Westerwood is easily pictured in the imagination as a bud that very soon will blossom into the richness of a full blown “American Beauty.”                      – A. K. Moore

By the summer of 1920, Moore reported “23 houses have either been constructed or are now in the process of construction. These houses are readily disposed of after they have been constructed as they are sold on the long time payment plan. In addition to the number of houses which have been constructed by the company a large number of lots on which the purchasers are building homes have been sold.” Work on infrastructure continued as well, the developer reporting that “we have added the conveniences and comforts demanded for the modern city home – paved streets and sidewalks, electric lights, gas, water and sewerage.”

The following year, Moore commissioned a model home in Westerwood that he publicized as Castle Charming. He later took the stylish Prairie/Craftsman hybrid house, located at 505 North Mendenhall Street, as his own home and had it furnished by Greensboro-based furniture retailer Morrison-Neese. The stucco home features a broad front porch, a low roofline, and a convenient porte-cochere for the family’s automobile (image, right). The marketing strategy worked well, and every house in Westerwood but one was sold within a year. Moore initiated a westward expansion of Westerwood that he named West Market Terrace.

A majority of homes in Westerwood were built during the 1920s. They feature architectural styles popular during the period such as Craftsman bungalows, Tudor Cottages, and Colonial inspired facades of brick, stone and wood.  On occasion, an unusual design would be inserted into the mix, such as the Mediterranean-inspired home with rounded arches and a hipped gable roofline at 105 Courtland, or the Regency Style House at 810 Fairmont.

An unusual Airplane Bungalow stands at 910 Courtland Street. The Emma Corbett Thomas Residence was likely built speculatively by developer A. K. Moore and financed through a mortgage held by the Metropolitan Life Insurance Company for $10,000. The Airplane Bungalow is a rare variation of the Craftsmen Bungalow. The subtype earned its name in having a second floor that was largely wrapped in windows. In the case of Airplane Bungalows, the window-wrapped second floor resembled the feeling of being in the cockpit of an airplane. This is one of the only Airplane Bungalows in Greensboro (image, right).

Though exterior appearances vary, typical interior details of Westerwood homes tend to share typical interior details including hardwood floors, large linen closets, butler pantries, cloak closets, breakfast alcoves, built-in bookcases, and French Doors. A majority of house plans are simple and modest, with living and dining rooms flanking the main entry, a kitchen to the rear, and a second floor with three bedrooms and one original bath. Popular modifications include the addition of a family room to the rear, the addition of a master bathroom, and expanded kitchens.

Moore used deed restrictions as a tool direct the character and composition of his real estate developments. In the years before municipal zoning laws were established, some developers utilized property restrictions to govern property use, building setbacks, and sometimes residents to affect the value and appearance of of their subdivisions.

In Westerwood, for example, Moore prescribed the setback of structures from the street, placement of garages, and disallowed use of property in the neighborhood for business, manufacturing, or commercial purposes. These controls kept a uniform appearance in the neighborhood that resulted in wide grassy lawns and suburban character (example, right).

In contrast to the visual and functional restrictions on properties, developers throughout the country routinely added ethnic, religious, and cultural restrictions to deeds. Racial deed restrictions became common after 1926 when the U.S. Supreme Court validated their use. The restrictions were an enforceable contract and an owner who violated them risked forfeiting the property. Many neighborhoods restrictions prohibited the sale or rental of property by Asian Americans, Jews, and African Americans.

In Westerwood, Moore placed language into the deeds of properties that stated “No persons of African descent shall occupy said property except as domestic servants in the employ of the occupants of the dwellings upon said premises.” In 1948, the U. S. Supreme Court changed its mind, declaring that racial restrictions would no longer be enforced, but the decision did nothing to undo the restrictions that forced segregation. It remained perfectly legal for realtors and property owners to discriminate on the basis of ethnicity, religion, and culture until Congress passed the Housing Rights Act in 1968.

In Westerwood, all restrictions instigated by A. K. Moore expired after 25 years, by which time the City of Greensboro had developed a code of building setbacks and zoning-use restrictions that replaced the original visual and functional restrictions. The wording remains, however, on archived deeds for nearly all properties in the city created before World War II. They remain a palpable reminder of the segregationist Jim Crow Era that shaped the way Greensboro developed nearly a century ago.

With its convenience to center city, UNCG and Greensboro College, as well as parks and the Downtown Greenway, Westerwood remains a convenient and sought-after neighborhood.