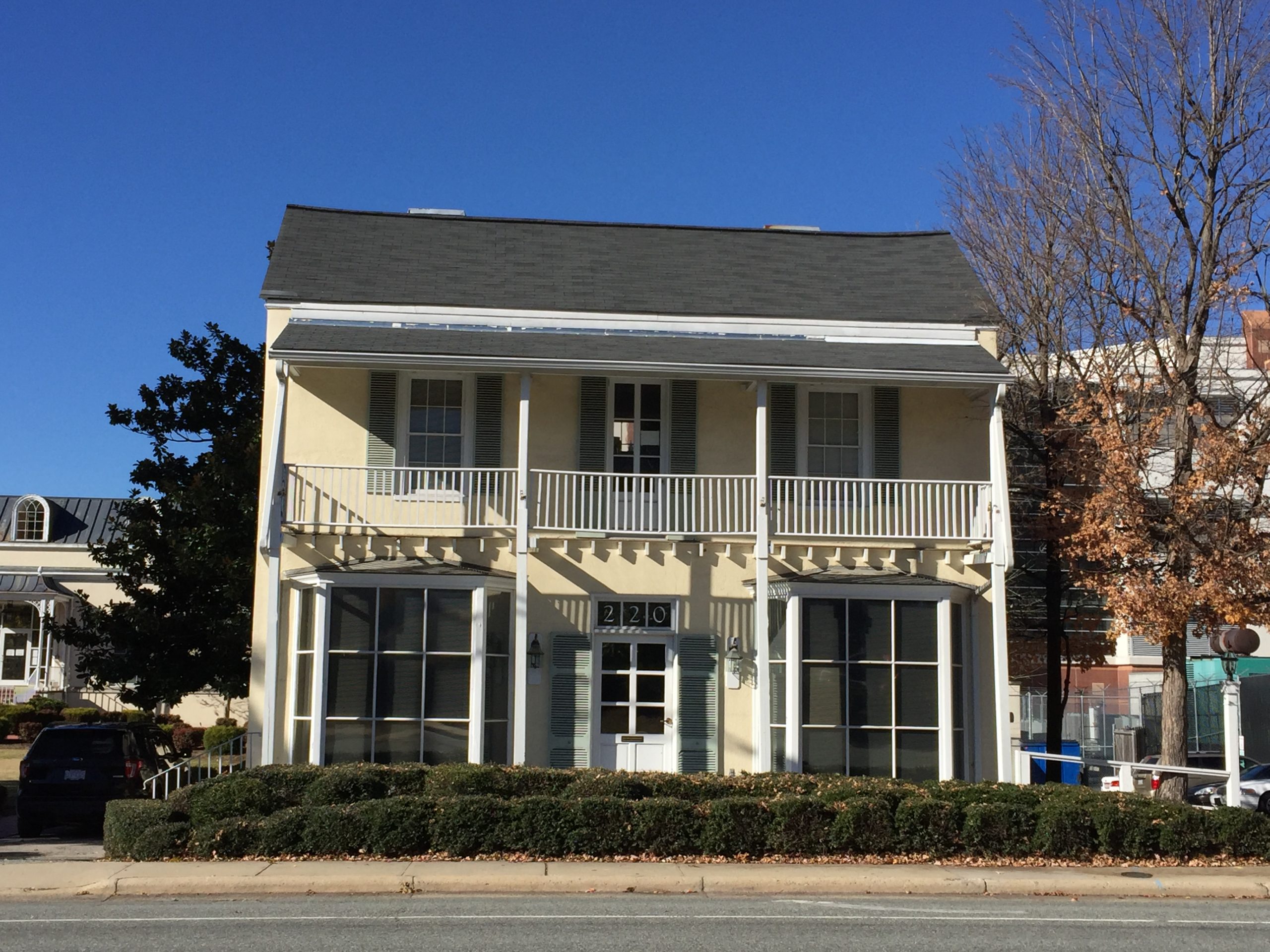 The property at 220 South Eugene was first referenced in deeds as land purchased by Moses Strauss from Emma Morehead and Julius Gray on 30 December 1885. The $450 purchase price indicates that there was not a house on the site, but soon Strauss embarked on construction of several modest income properties along West Washington Street. Dentist Dr. Walter W. Rowe is the first occupant of a house at 220 South Eugene in the 1890-91 City Directory.

The architectural features of this house, including a center-hall floor plan with rear chimney stacks and staircase with a landing is not typical of the period around 1890, when more elaborate and asymmetrical homes were popular. A possible solution is that Moses Strauss acquired a mid-19th century house fronting South Elm Street, and relocated the structure to South Eugene for use as income property. The plan of the home at 220 South Eugene includes a two-story main block with a rear ell extending to the right rear. A similar form of house stood near 233 South Elm Street. The home was owned by W. H. Hill, and existed in 1879 and 1885, but was gone by 1888 when East Washington Street was extended to connect South Elm with Davie Street. House moving can be disruptive to fragile plaster, and a scenario could be developed to understand that the original plaster was damaged during the c. 1890 move and was replaced with bead-board, then quite popular. The newel post and stair bannister appears to be early, perhaps from the mid-19th century.

Moses Strauss was an early member of the Jewish community in Greensboro, mentioned as early as 1886 as a merchant and investor in real estate in Greensboro. Strauss apparently “came to this place nine years ago and has made money – bought town lots and is building a whole row of first class dwellings.” Strauss also maintained a presence in Baltimore, where his niece resided. At his death in 1900, his obituary stated “Mr. Moses Strauss, a retired merchant of Greensboro, N. C., died Monday evening of cancer at the home of Mrs. Samuel Wolf . 1912 Druid Hill avenue, where he had been boarding for a number of years. He was 65 years old and was not married. Mrs. Abraham Lehman, or Eutaw Place, is his only surviving relative in this country. Mr. Strauss was born in Germany, but came to this country when a young man. He first settled in New York. Then he went to Greensboro. Upon his retirement from business he came to Baltimore to live. He was a member of the Masons and of the OddFellows and a regular attendant of the McCulloh Street Temple.”

After Strauss, ownership of the property was in the hands of Southern Loan and Trust Company as a mortgage holder for Anna H. Davis. In December 1912 the property was sold to Nancy Lambe for $2000, and from her estate to David White in 1939. A later owner was Otto Zenke, who acquired the house in December 1952.

Otto Zenke used the house as a showroom for his furnishings, and likely installed the paneling in the Front right room, described as “pickled pine” a.k.a. “deal” pine. Its source is unknown, but may have been purchased most likely in NYC, possibly England. The Left Room was sometimes displayed as bedroom could contain a purchased mantel, or custom made.

The house dates from the mid nineteenth century, and was likely a fine house located on South Elm Street, and was moved to South Eugene around 1890. It is a very rare surviving structure from an early time in Greensboro’s history, and among the few surviving residences from the village of Greensborough.