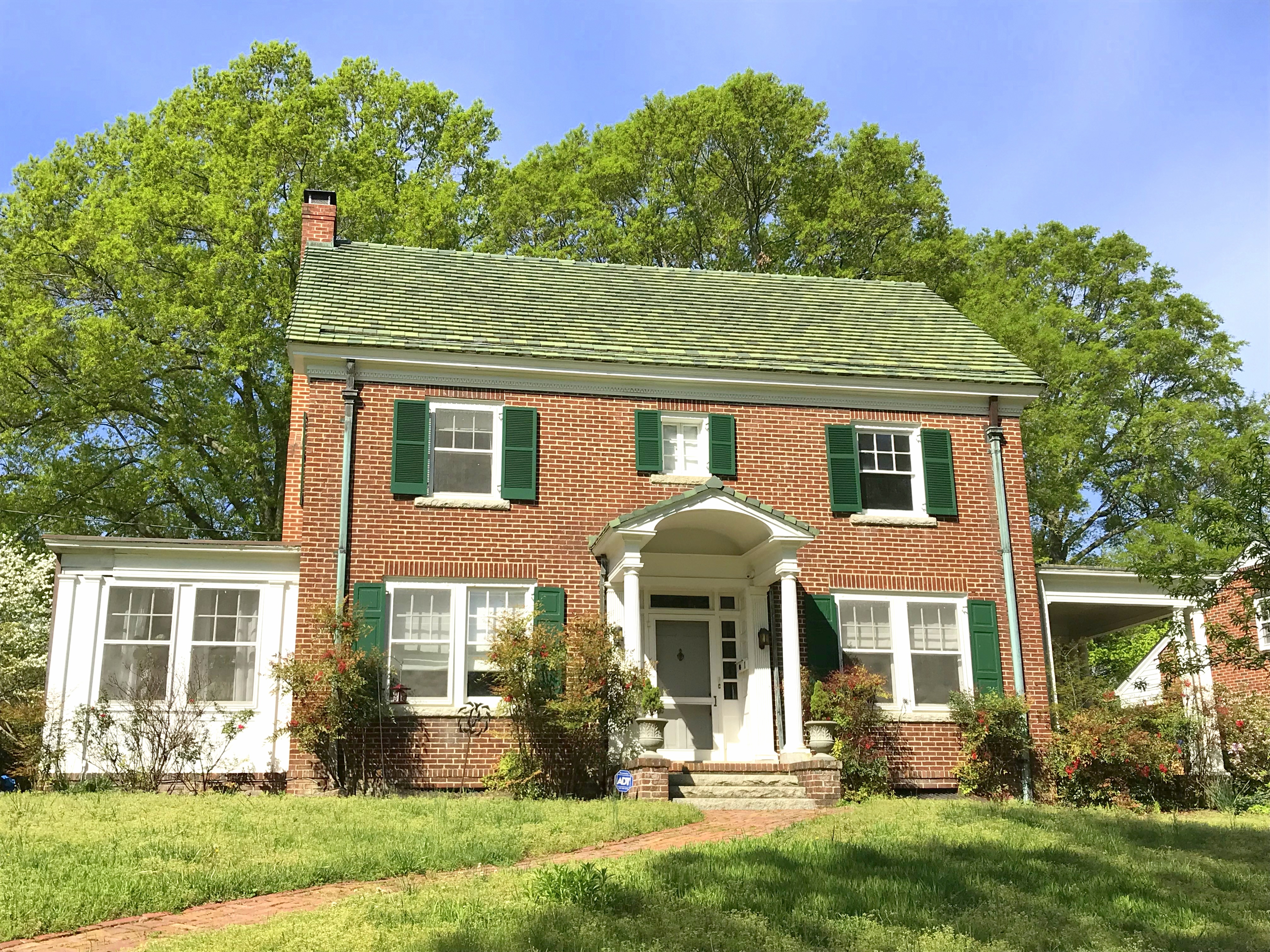 Joseph Marvin Hunt was born in Kernersville and was founder of the Hunt Brothers Plumbing and Heating Company. In 1902 he married Pattie Kirkman of Walker Avenue, and the couple began a family of five, including Joseph Marvin Jr., Kenneth, Eleanor, Ruth Adalaide, and Barbara. The Hunts ercted this eye-catching house at 810 Willowbrook Drive overlooking an extension of Lindley Park around 1925. The family worshipped at College Place Methodist Church, where Joseph was a charter member of its Men’s Christian Service Club. The family did not remain in the house very long. Joseph sold the property back to his bank in 1930 and soon the house appeared in the newspaper for rent. The next homeowners did not move into the house until 1940.

The Greensboro Daily News reported on July 24th, 1925 “The biggest single permit yesterday was taken out by J. M. Hunt for the construction of a nine-room two-story brick veneer home on Willowbrook drive, to cost $10,000. The home is to have a slate roof and is to be modern in every respect.”

Topped by a deep green glazed Ludowici tile roof, sheathed in a deep red brick and trimmed in crisp white woodwork, this well-designed two-story Colonial Revival house was inspired by restorations conducted in the 1920s at Williamsburg, Virginia. These restoration projects were based on academic studies that gathered colonial period architectural details that were available for use by architects and buildings across the county. The Hunt House exhibits details typical of colonial architecture including the central entryway with sidelights and transom sheltered by an arched stoop, and a detailed cornice featuring delicate dentils.  The roof, originally anticipated to be of slate, was sheathed in clay tiles – perhaps a colorful nod to the some of the grand estates of Fisher and Irving parks. The south facing sunporch and the upstairs sleeping porch were both amenities to provide relief during the hot summers – before the widespread use of air-conditioning!

Sarah Grahl, a UNCG graduate student enrolled in Jo Leimenstoll’s class IAR/HIS 624 discovered: The Hunts (related to future North Carolina Governor Jim Hunt) built the house and lived in it until it was sold to Greensboro Bank and Trust Company in 1930. The house then sat vacant until selling it to United Bank Building Company in 1932. By 1933, the bank was renting out the house and a man named John Bruce was living in it. From 1935 to 1940, John Bruce and Acors Gunn were both listed as residents of the house. In the fall of 1940, Fred Zwickey bought the house. He was listed as resident until 1962, when the Greensboro City Directory had Lucille Zwickey listed. The house sold later in 1962 to Charles and Florie Graham, then to the Nash family in 1967, who lived in it until 2013. After another couple lived in the house for only three years, the Adams bought the house in 2016. They currently live in the home adding warmth and life to the structure. They said they purchased the house upon moving to Greensboro because they had decided that whatever style house they bought, they wanted it to be a good—if not the best—representation of that style in the area. They were thrilled to find 810 Willowbrook Drive to be a beautiful representation of Colonial Revival.

In 2019, the Hunt House was included as part of Preservation Greensboro’s9th Annual Tour of Historic Homes & Gardens