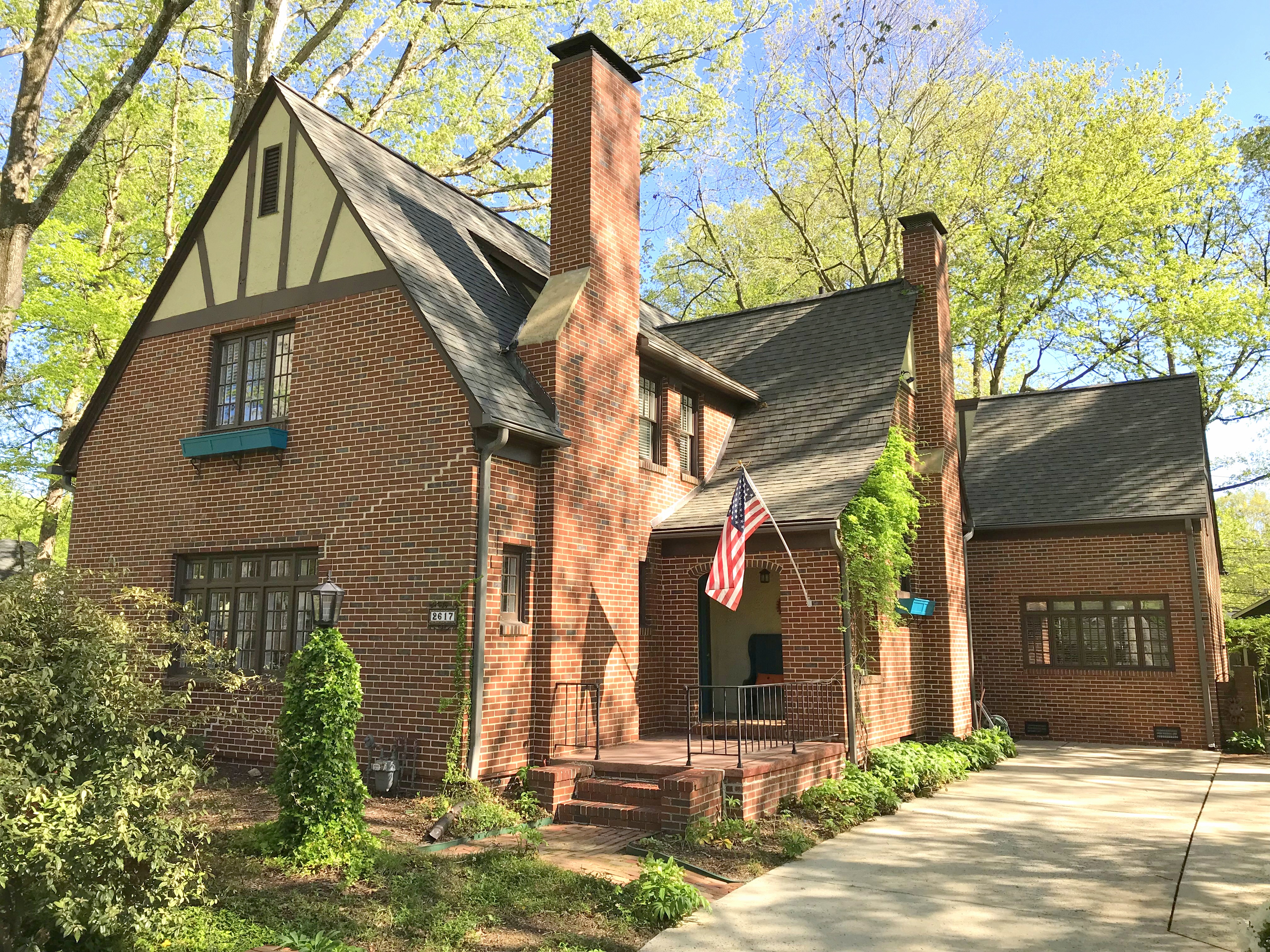 This two-story brick Tudor Revival house was built by Emily and Curtis Holland at 2617 Beechwood Street in 1927. Curtis, a native of Chatham County and veteran of World War I, was employed as the assistant advertising manager at Vick Chemical Company at the time they erected their home. Emily and Curtis were married in 1927, and had two sons, Otis and David and one daughter, Ashley.  Life in the house with a young family was quite active but Emily found time to join neighborhood social and civic circles, such as the Lindley Park Welfare Committee, the Lindley Park Garden Committee, and the Twenty Readers Book Club. The family worshipped at Christ Wesleyan Church where Curtis served as Treasurer and taught the Holland Bible Class. The Hollands remained in the house until their deaths. Emily died in 1979, and Curtis in 1981.

The Holland house is a classic example of Tudor architecture, a style that Curtis might have observed on duty in Europe during service in World War I. The form of the house is irregular, as if to imply the house evolved organically through various additions over time. A brick gabled wing dominates the façade and features some half-timber work in the steep gable. Casement windows, prominent chimneys and a segmental arched entry round out the Medieval-inspired composition. Notable interior details include broad casement windows that allow ample natural light, a circular floor plan for entertaining, and living space in the converted garage. The guard house for Curtis’s longtime employer, Vick’s Chemical, stands in the back yard! The house sits on a double lot, with a former garage to the rear (now enclosed) and a lush woodland garden with mature trees to the east.

Monica T. Davis, a UNCG graduate student enrolled in Jo Leimenstoll’s class IAR/HIS 624 adds: As originally configured, the home’s front door is nestled under a deep one-story sitting porch. The bench built by the owner is centered on the porch with delicate orange pillows resting on it. Off the foyer is a large sitting area with its original casement windows and updated stone fireplace. To the right of the foyer lies the kitchen and a large dining room with its original chandelier. A detailed craftsman staircase leads to the second floor, and the layout upstairs consists of three large bedrooms and one bath. The bedroom at the back of the house leads to a beautiful balcony. Despite its varied ownership history, the house has retained its historic integrity. Alterations and modifications have been completed to modernize the home for twenty-first century living needs, but the original casement windows, several light fixtures, and flooring have been sustained over the last decade. The home is situated on three land lots which provide an outdoor oasis and a picturesque storybook feel.

Six vintage homes in the Lindley Park neighborhood will open their doors to ticket holders during Preservation Greensboro Incorporated’s ninth annual Tour of Historic Homes & Gardens on May 18-19, 2019. The tour will highlight charming features of early twentieth century architecture, including Vernacular farmhouses, examples of Craftsman architecture, a Tudor house, and this Colonial Revival design.

One of Lindley Park’s Oldest Homes on Tour
May 3, 2019
Please Join Us!
Did you know? As Greensboro’s only not-for-profit advocate for historic preservation, we receive no funding from city, state, nor federal sources. Our success is based on your support. Members receive two free passes to Blandwood, and much more. Preservation Greensboro is among North Carolina's oldest city-based organizations dedicated to saving our community's architectural treasures!
Join Us!
Go to Top
Loading Comments...