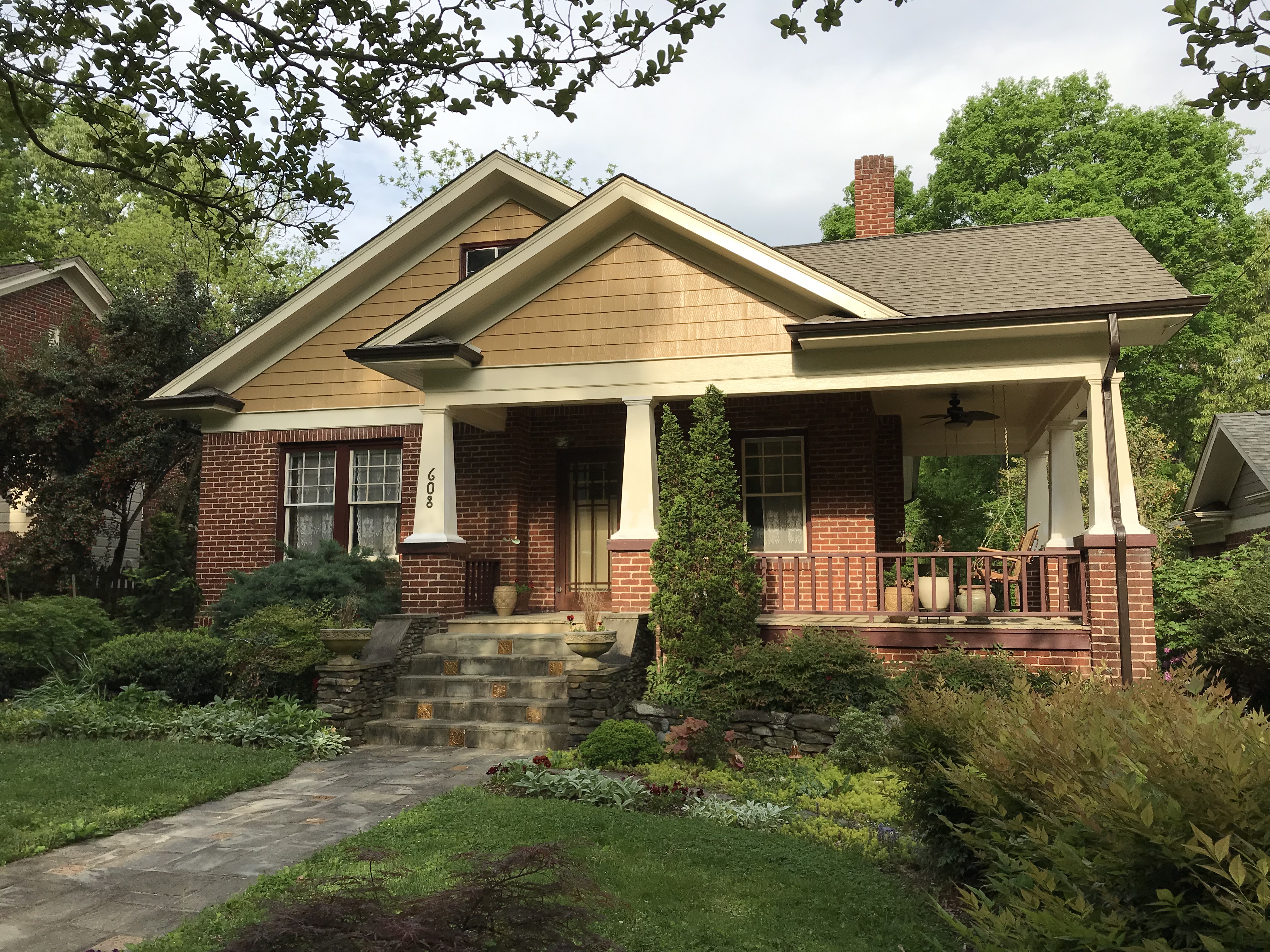 The Lessie and William Payne House located at 608 Longview Street was likely a speculative investment by real estate agent R. C. Millikan financed through Prudential Insurance in 1927. It was sold to Mattie and William Mayes who assumed a mortgage of $5,100 but the Mayes did not live in the house very long, if ever – they sold the house and it served as an investment property in the years after the Stock Market Crash of 1929. In 1931, Lessie H. and William B. Payne purchased the house for their growing family. The couple has been married in 1923 and had three children: Evelyn, Jean and William Jr.  William was a salesman with the Corbett Motor Truck Company and served as its president in Henderson NC from 1938-1944. He was remembered for his civic service with the Guilford Lodge No. 656, the Oasis Temple of the Shrine, and the Rotary Club of Jamestown. Lessie was active in the 1930s developing a playground and she served on the Lindley Park Garden Club. The family briefly lived in Henderson but they returned to Longview where they lived until 1948.

The Mayes-Payne House is designed in the manner of a classic American bungalow. Notable eye-catching features include the use of wire-cut brick, battered post-on-pier porch supports and shingled gables. A wide and deep front porch provided space for a swing, and lots of room for warm summer evenings and gossip and ghost stories. Interior spaces include a living room with a fireplace and mantel. The plan provides just enough wall and floor space for prestigious items such as a davenport or a small piano. An open floor plan provides entry to the dining room, with space for a breakfront and table for four. The kitchen is efficiently arranged with access to a long hall to sleeping quarters. To the rear of the property is a wonderful home garden.

William Clifton Woods, a UNCG graduate student enrolled in Jo Leimenstoll’s class IAR/HIS 624 added further description: The interior maintains many of its original characteristics — the existing corridors and separation of rooms. Much of the original millwork for baseboard, trim, doors and windows all remain original as well as the original glass knob hardware used for most of the doors. An exception given to the crown molding used in both the living and dining areas. The original bathroom maintains its black and white small hexagon pattern tile floor. The most prominent character-defining feature of the interior would likely be the original coal fireplace in the living room. This fireplace was manufactured and sold by Majestic Coal Chute. The coal heating system shoots extend under the house to an outside reservoir where regular shipments would have been delivered. The exterior door for the coal system displays the company and date of 1926, which may reinforce the construction date of the building in 1926 or 1927. Another strong interior character feature would be the existing glass double doors that separate the living and dining room. These doors are in a 15 lite French style door and maintain much of the original glass.

Storybook Tudor in Lindley Park Open for Tour
May 1, 2019
Please Join Us!
Did you know? As Greensboro’s only not-for-profit advocate for historic preservation, we receive no funding from city, state, nor federal sources. Our success is based on your support. Members receive two free passes to Blandwood, and much more. Preservation Greensboro is among North Carolina's oldest city-based organizations dedicated to saving our community's architectural treasures!
Join Us!
Go to Top
Loading Comments...