The Blandwood Carriage House: A Blend of the Distant and Recent Past 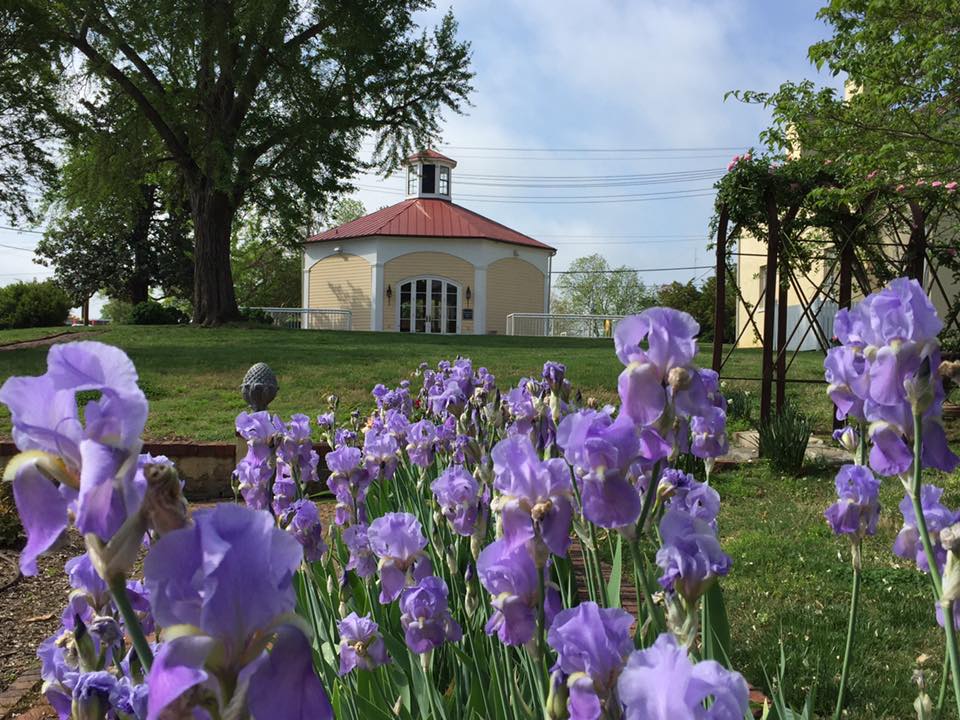 Octagonal buildings were architectural curiosities in the mid-nineteenth century, when promoters assured that their shape would be cheaper to build and more efficient to use than traditional buildings. The fad must have been enough to capture the eye of the occupants of Blandwood. Based on the nails used to construct the cupola, and saw marks, the octagonal structure was constructed sometime between 1855 and 1880. Within that period, it likely dates from the lifetime of Governor John Motley Morehead, who passed away in 1866.

The Carriage House is remembered in family memoirs as the storage site for Governor Morehead’s grand coaches that took him across the state on business. Atop the building was a cupola that featured both louvered openings allowing air to flow through the building, and glazed windows to admit light.
During the time that Blandwood was converted into a hospital under the management of the Keeley Institute, the Carriage House was moved and attached to the corner of the main house (at the southeast corner) for use as a dining room for patients.  When restoration of Blandwood began in the 1960’s, the original Carriage House was in poor structural condition.  Sadly, the old Carriage House could not withstand being moved a second time when restoration began in August, 1967 and it was razed. However, the original cupola was carefully removed for preservation.

Carriage House was constructed in partnership with the Junior League of Greensboro. The League saw opportunity in using the pavilion for meeting and special event space.  The reconstruction resembles the shape and design of the original building, through the careful design of Greensboro architect Ed Loewenstein. Loewenstein devised a plan to reconstruct the facility that accommodated a warming kitchen, meeting space, and lavatories by using a below-grade configuration. The architectural sleight of hand allowed the facility to respect the innovative octagonal shape that captured Governor Morehead’s eye. Newspaper reports from the Grand Opening in March 1970 described the interior spaces, designed by noted interior architect Henry Zenke:

Two sides of the octagon are glass-paneled doors which, along with the cupola, admit enough light to complement the interior’s garden room feeling. The mood is created by the application of white strips of wood on the buff-colored walls to create a lattice effect.

The cupola from the original Carriage House was restored and repositioned atop of the building. So pleased was the community with the project that the cupola served as the logo for Preservation Greensboro through much of the 1970s.

Since 1970, the facility has been available to the public for social events, meetings, and seminars thus fulfilling one of Greensboro Preservation Society’s original goals of returning Blandwood’s role as a community convener and an elegant civic center. Countless weddings, fundraisers, workshops, political rallies, and receptions have been enjoyed within this unique building. It remains a unique treasure for the Triad, where visitors can enjoy the charm of Blandwood, Guilford County’s only National Historic Landmark building!

The Willow Oak on the South Lawn at Blandwood
December 23, 2015

Pivoting Politics: Documenting the Shifting Position of John Motley Morehead on the Topic of Slavery
September 15, 2015

Letitia Morehead Walker’s Unconventional Role in Southern History
July 15, 2015
Please Join Us!
Did you know? As Greensboro’s only not-for-profit advocate for historic preservation, we receive no funding from city, state, nor federal sources. Our success is based on your support. Members receive two free passes to Blandwood, and much more. Preservation Greensboro is among North Carolina's oldest city-based organizations dedicated to saving our community's architectural treasures!
Join Us!
Go to Top
Loading Comments...