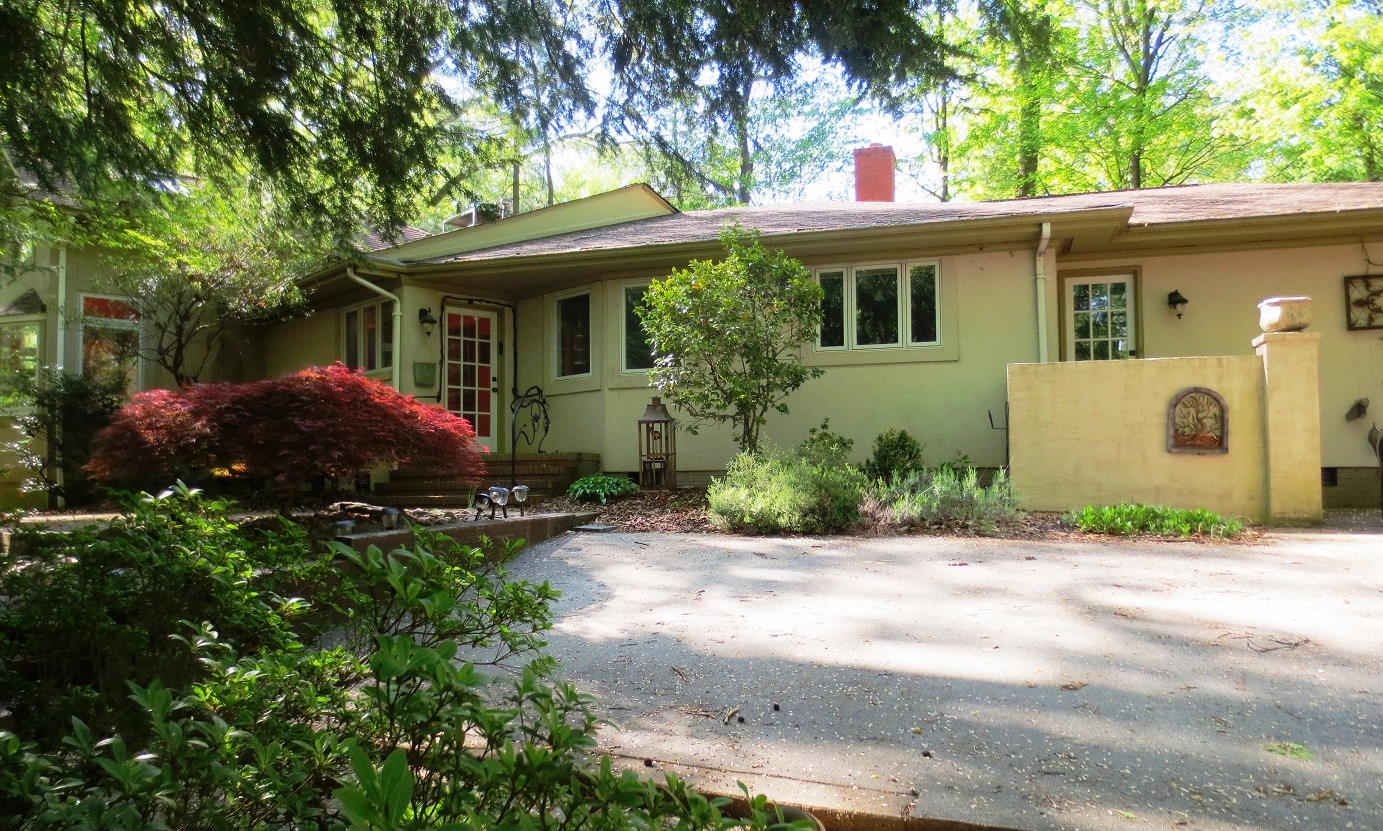 Bright sunlight floods the interior of the Louise and Vernon Barrickman House, highlighting a cheery art collection by one of Greensboro’s best known artists.  Located on a low bluff overlooking the intersection of Kemp Road West and Erskine Drive West, the Barrickman House was first occupied by Louise (1913-1957) and Vernon (1908-1961) Barrickman. The couple financed their home through Starmount Builders, indicating the home might have been built through that company. Barrickman was an ad salesman with the Greensboro News when he and his wife moved into the home around 1953.

The couple only lived in the house for four years. When Louise passed away in 1958, Vernon sold the house to Lena and Ben Krieger. The Kriegers owned Benlee’s women’s clothing at 936 Summit Avenue. The family operated the store there and in subsequent locations for over 60 years. Ben died in 1969 of a heart attack and Lena remained in the home until 1976.

The Barrickman House is an example of the American Ranch House. The 3,020 square foot house is identified through its one-story form with a low-pitched roof featuring no dormers. It features a wide overhanging roof, an off-center entryway, and a garage attached to the side of home. Large windows, including picture windows, grace the façade.

Ranch style homes first appeared in subdivisions of Southern California in the mid-1930s, and their popularity was boosted by their convenient one-level form which qualified for Federal Housing Administration financing. Plans for Ranch-style homes were shown in leading shelter magazines of the day such as House Beautiful and House and Garden.

Homebuyers quickly embraced the house form that featured an open living room with generous access through a dining area to a convenient kitchen. In turn, the kitchen was located adjacent to the garage for an increasingly car-oriented market. Modest bedrooms were located away from the kitchen, and often shared a full bathroom.

Over the course of the past 60 years, many Ranch-style homes have been modified to suit homeowner’s needs, including expanded families with an increasing appetite for space. The Barrickman House is an excellent example of this popular trend as interior spaces have been expanded. In this example a bright artist’s studio, has also been enclosed to the rear of the house, and a dining area has been expanded to the front of the house.

The Barrickman House features a large private yard with courtyard filled with eclectic art.
Today, the home is owned by Dori and Paul Jalazo. Dori is a well-regarded artist. Her work is in public and private collections throughout the world, including those of Nobel Peace Prize Winner Elie Weisel, actor Henry Winkler, and musician Harry Connick Jr.