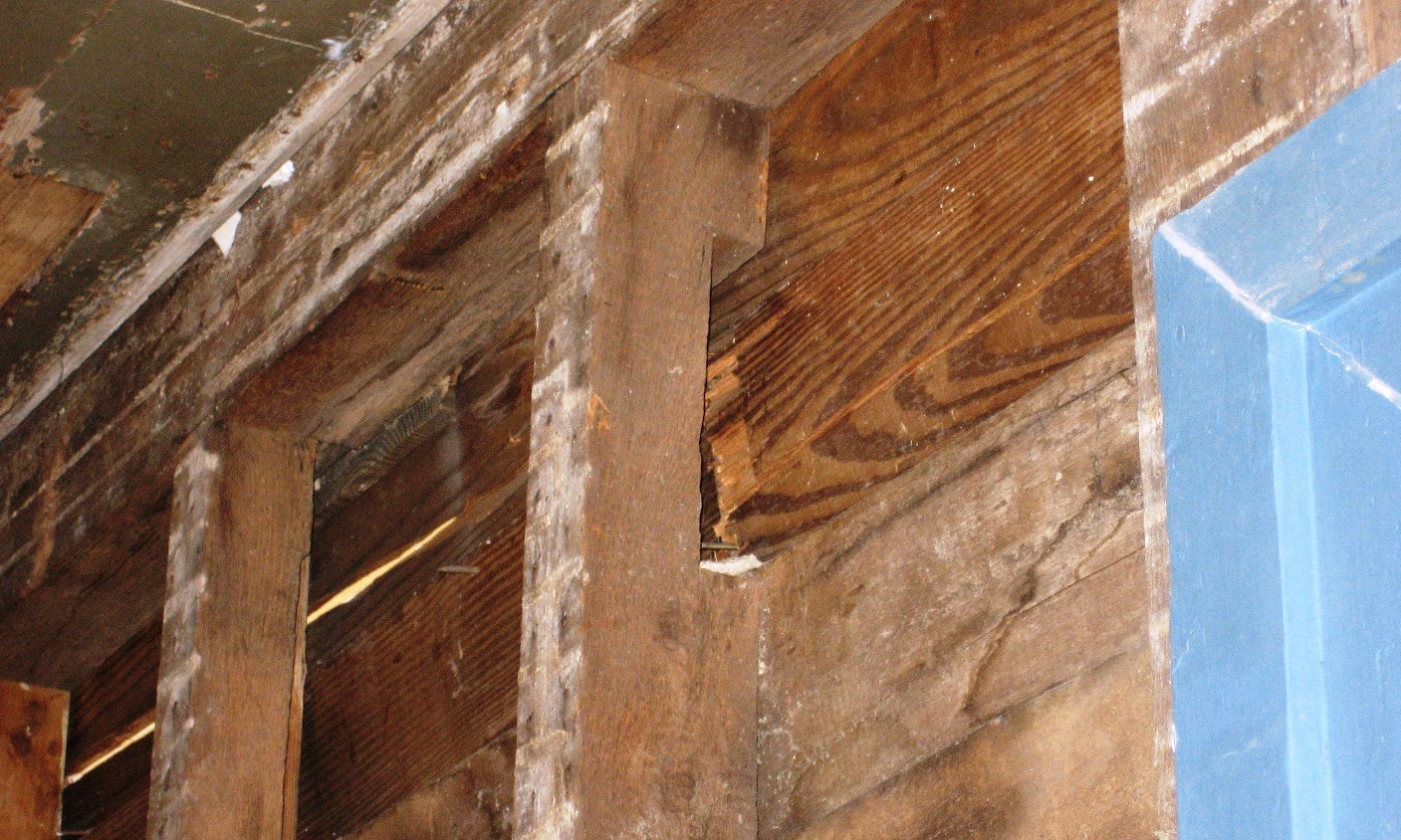 For those driving on Friendly Avenue in west Greensboro, it is clear that work is underway on one of Greensboro’s most highly anticipated restoration projects.

Recent insights on the history of the Albright House have been confirmed by the removal of aluminum siding and interior plaster – part of the scope of work currently being completed. Evidence continued to suggest the home was constructed around 1850, and research work currently underway through a UNCG historic preservation class will likely fill in more gaps in the historical narrative.

With removal of the aluminum siding, the decorative rafter tails – previously only glimpsed through a gap – are now open to sunshine (image, upper right). The rafter tails were a direct influence of Greensboro’s own Blandwood Mansion, whose Italianate details directed a national movement of architecture style. Interestingly, the rafters are not structural. Instead, they are applied beneath the structural rafters solely as a decorative feature.

Inside the house, the wooden sheathing used for ceiling boards in the east parlor are now exposed in the entry hall and beneath the stairs (image, center right). These wide boards are hand planed and affixed to wall studs and ceiling joists using c. 1850s period cut nails. They likely hold information on some original paint colors used in the house before the Civil War.

Structural members such as studs and joists all feature sash saw marks. Sash saws were most often water powered here in the Carolina Piedmont, and their use was quickly supplanted by steam-powered circular saws with the arrival of the Great Fayetteville and Western Plank Road through High Point in 1852. Sash saw marks are a rare treat among preservationists here in Guilford County!

Amid the many features that merely confirm previous findings, one important new find has been identified in relation to the original façade of the house. A notch cut into the front-facing wall studs has revealed the location of the ledger-strip on which the front porch roof rested. The ledger extended across the middle of the front façade, terminating just inside the existing windows (image, lower right). This clue supports the theory that this house once looked very similar to the Walker-Scarborough House on McGee Street in College Hill. The grand, two-story Tuscan portico currently gracing the house was possibly added in the twentieth century in a lavish “updates” of the home.

The discovery of a previously unidentified nineteenth century home in Greensboro is an unusual gift to the city for its 200th birthday! The Junior League is not taking their newfound treasure lightly as they embark on a thorough restoration of the landmark for their new headquarters. With its historic materials and features recorded, more information will likely be uncovered by historical research. Keep up with new information on the (re)discovery of the Albright House right here!