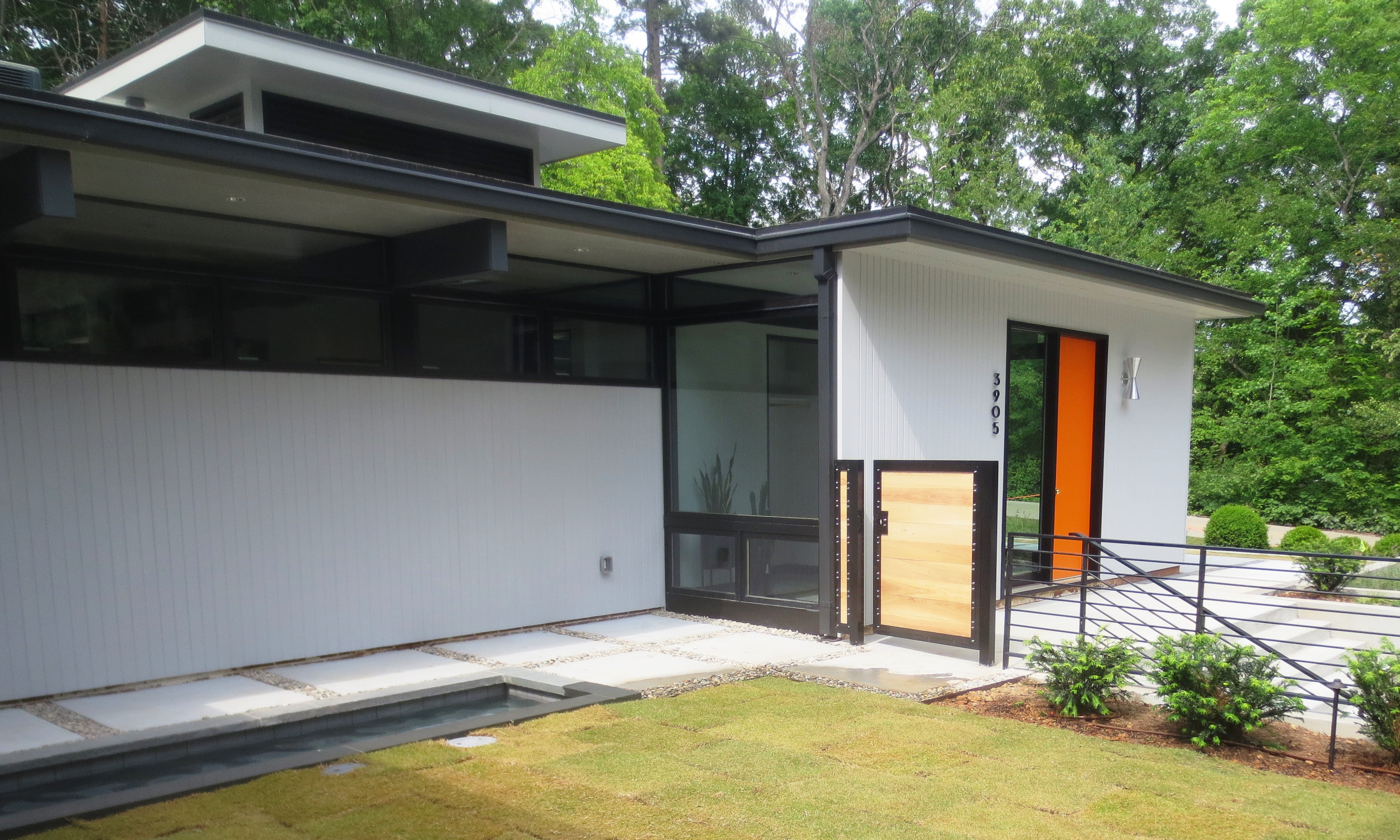 Among the homes of Hamilton Lakes, the Howard House at 3905 Henderson Road stands as an eye-catching example of Mid-Century Modernism. Built for Diane (1929-2009) and Will (1927-1996) Howard in 1955, the house has been substantially reconstructed in 2014-15 in order to address long-term challenges related to materials, drainage, and sustainability. It retains its original H-shaped plan and honors the scope, scale and materials of the initial design.

Will Howard was a native of Charlotte, where his father established a construction company under his own name, the Paul Howard Construction company. One of three sons, Will and his brother Paul “Pug” Howard operated the Greensboro branch of the company, which specialized in civil construction including road and runway projects across the globe. Will was married to his wife Diane in 1949, and this project was their first new construction. They chose Will’s fraternity brother, Tommy Hayes, to design the home, and selected a heavily wooded site in the Hamilton Lakes neighborhood. The neighborhood’s large wooded lots were perfect for a Mid-Century modern home.

Architect Thomas Thurman “Tommy” Hayes, Jr. Hayes was a graduate of North Carolina State University, where he received a degree in architectural engineering in 1949 and a degree in architecture in 1951. Those formative years at NCSU’s School of Design were under the leadership of the school’s Dean, Henry Kamphoefner, and it quickly earned a reputation as a center for modernist doctrine. Hayes was undoubtedly part of that movement.

After graduating from State, Hayes worked with other established architects including Raleigh’s William Deitrick and Greensboro’s Edward Loewenstein, before initiating his own practice in 1952. One of his earliest commissions was the Hayes Residence.

Hayes designed the Howard home in 1955 and broke from the traditional lines established in Hamilton Lakes a generation earlier that reflected Colonial and European design inspirations. Their home featured a flat roofline and solid wood and brick exterior walls that alternated with voids of glass. Interior spaces were austere; featuring areas of terrazzo and carpet coupled with masonry and textured walls. Unusual details include clerestory windows located between ceiling joists and a copper hood above the fireplace. True to the style, public spaces are logically separated from private as the form of the house is dictated by the function of spaces. Form follows function.

Diane and Will enjoyed their eclectic and unusual home by decorating the interior with unusual features such as Japanese swords and wrought iron coffee tables, and threw parties and events among fashion-savvy residents of Greensboro.  Their family story is profiled in the March 2015 O.Henry magazine. The couple moved from the home in 1967.

The house has been acquired by Liz and Mike Felsen. The couple found the original plans for the house and retained Martin Felsen and Sarah Dunn of UrbanLab of Chicago for reconstruction, and consulted with Brent Skelton of Greensboro for the landscape design.

Thanks to North Carolina Modernist Home for research on this property.