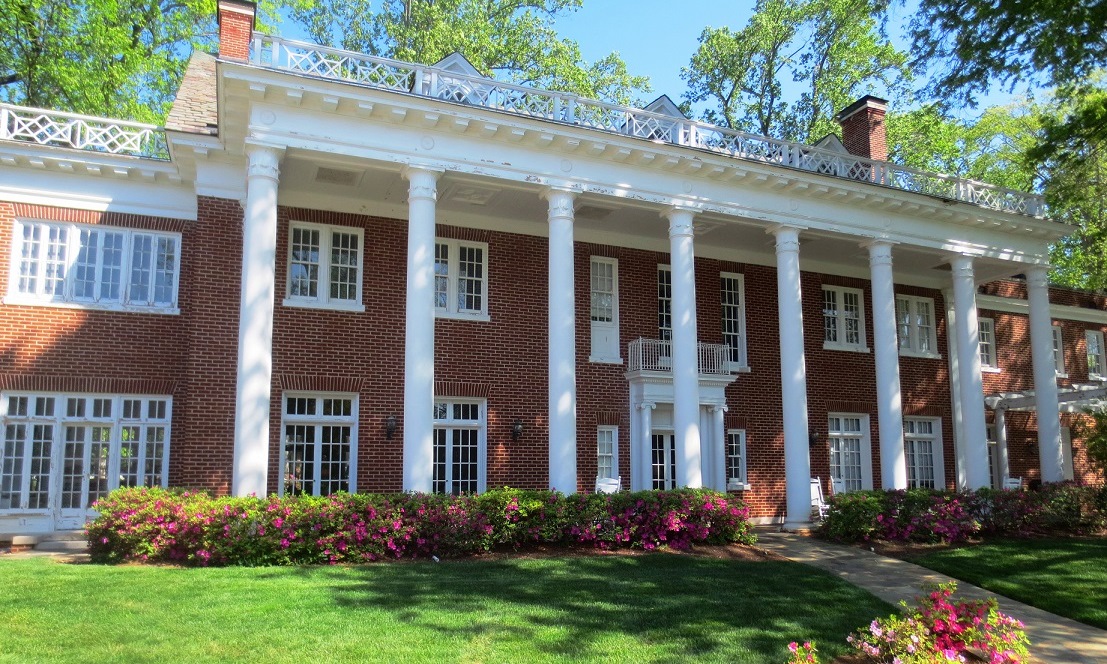 Built as the home for prominent lawyer and businessman Alfred Moore Scales (1870- 1940) and his wife Mary (1892-1960), this two-story, brick Neoclassical Revival residence at 1207 Lakewood Drive is located in the heart of Greensboro’s Hamilton Lakes neighborhood.  When the house was built in 1926, Scales was a practicing attorney, mayor of the village of Hamilton Lakes, president of the local Ford Motor Car dealership, and served in various capacities on boards of several insurance and real estate development companies in Greensboro. The house was likely the first built in the town of Hamilton Lakes, which featured curving streets punctuated by Lake Hamilton and Lake Euphemia.

Architect Christopher Gadsden Sayre of Anderson, South Carolina designed the house with two prominent facades. The West façade faces Lakewood Drive and features an impressive two-story portico with a classical entry. The East façade overlooks Lake Hamilton and features a full-width and full-height portico of Corinthian columns topped by a Chippendale balustrade. The Scales house remains as a tangible reminder of Greensboro’s rapid economic growth in the 1920s, and the grand scale of buildings and landscapes afforded during that period.

The home has a remarkably intact set of panels of Zuber & Cie wallpaper. Zuber & Cie is thought to be the last factory in the world to produce woodblock printed wallpapers and furnishing fabrics. Since its founding in 1797 by Jean Zuber, Zuber & Cie has maintained its headquarters at Rixheim, France. Jean Zuber’s wallpapers were so respected that King Louis Philippe honored him in 1834 with the Legion of Honor.

Zuber & Cie uses woodblocks engraved during the 17th, 18th, and 19th centuries. The scenic panoramas a variety of themes such as Vue de l’Amérique du Nord, Eldorado, Hindoustan, les Guerres d’Independence, and Isola Bella. The Scales House features Eldorado…which dates from 1848 and was installed in 1926. It depicts scenes from four major continents, Europe, Asia, Africa and the Americas. Zuber wallpaper panoramas can be seen in the Diplomatic Reception Room of the White House, the Carolina Inn in Chapel Hill, Prestwould Plantation near Clarksville Va, the Greenbrier Resort in West Virginia, and governor’s mansions in Columbia SC and Baton Rouge, Louisiana.

Tragically, the family lost the home with the Great Depression. As a pragmatic course of action, they moved into Tar Haven, the home across the lake occupied by Scale’s brother. The loss of the house to creditors in the 1930s might have inspired a turn against Capitalism in the heart of youngest son Junius Irving Scales (1920–2002). In 1935, young Scales began frequenting the Intimate Bookshop in Chapel Hill, an off campus gathering space for intellectuals and bohemians with a clandestine Communist Party printing press in a back room. He was soon hired as a clerk in the store at the age of 16, and started attending the University of North Carolina at Chapel Hill the following year. In 1939 he joined the Communist Party and quit school to become a union organizer in the Southern textile mills. The attack on Pearl Harbor brought an end to his organizing efforts, but he returned to Chapel Hill and completed work on his bachelor’s degree after serving in the Army. He became the state Communist Party chairman in 1948, serving openly and publicly, leading to newspaper stories that alarmed his once wealthy Capitalist family.

The FBI periodically monitored him, leading to an arrest in 1954. He was not charged with any overt acts, but was indicted under the provisions of the Smith Act as a member of an organization which advocated violence. Scales lost his final appeal, Scales v. United States, in the United States Supreme Court on a 5-4 decision. He served 15 months of a six-year sentence at Lewisburg Penitentiary in Pennsylvania before President John F. Kennedy commuted his sentence on Christmas Eve, 1962. He became the only Communist Party member to serve in prison on these charges.

The Scales House was recognized in 1988 as a Guilford County Landmark Property.