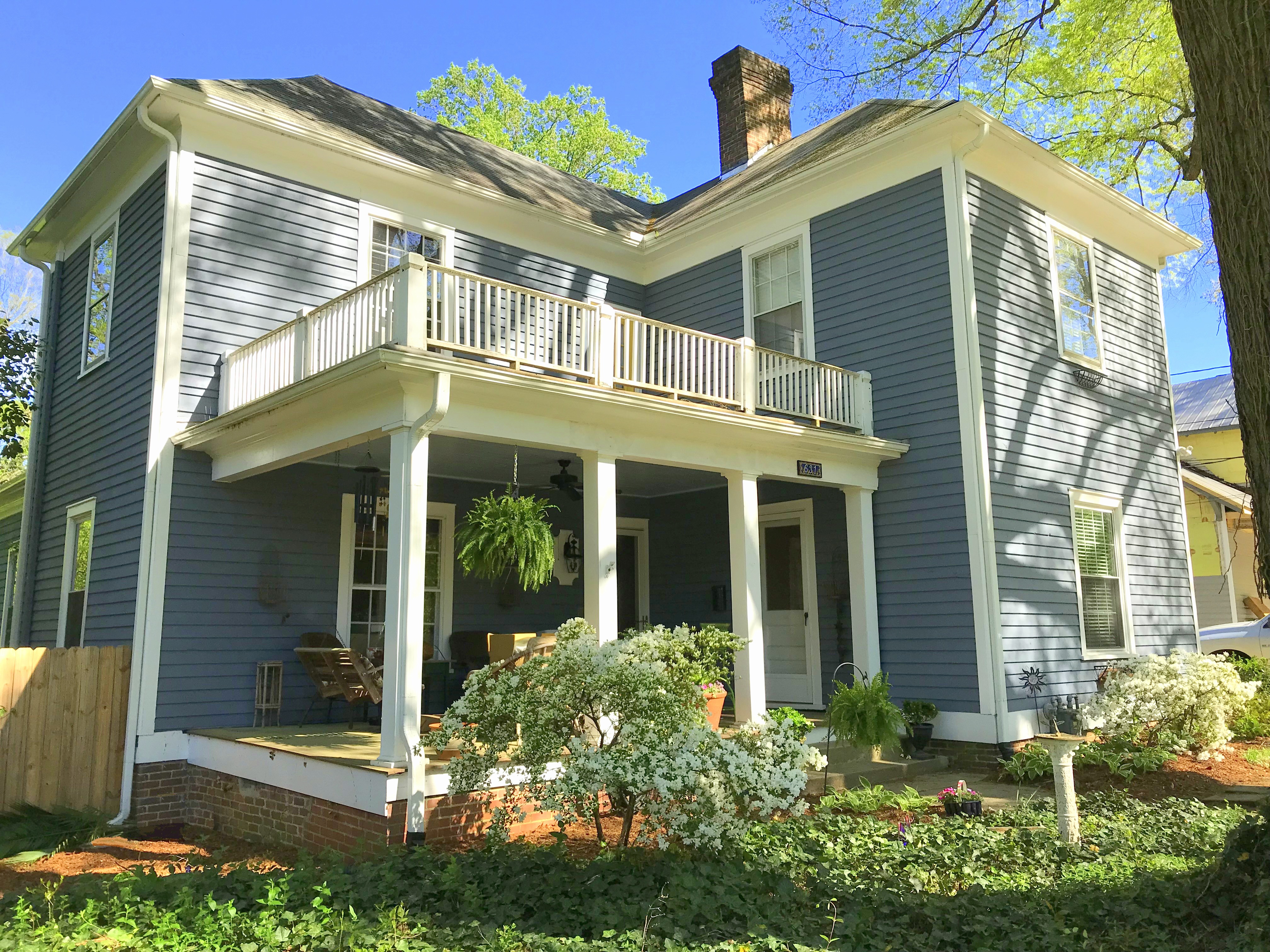 Oral history maintains this house was moved from across Scott Avenue, and documentary evidence supports this legend. The Lydia and James Cartland House, located at 631 Scott Avenue, is likely among the first erected in Lindley Park, associated with an early iteration of the neighborhood known as Park Place. In 1910, Lydia and James L. Cartland purchased the lot at 205 (later renumbered 632 Scott Avenue), and by 1912 the couple were living at a residence at that location. The Cartlands sold their home to Mary A. Richardson in 1916, who in turn sold to Cora and Rufus Sanford McClamrock. McClamrock was a well-known owner a mantle and tile company on South Elm Street. In 1922 the Greensboro Daily News reported Mr. and Mrs. R S McClamroch have moved into their new home, “Beechwood”, at 205 Scott avenue. While building, they made their home with their daughter, Mrs. C E Bennett, at her home, “Oakhurst”, at 200 Scott avenue.” It is likely their c. 1912 home was moved across the street, where a house appears at 208 Scott Avenue for the first time in 1923. The first occupants at the new location were Cora and Frank Smyre.

The two-story frame house is typical of Greensboro residences of the first decade of the twentieth century. Simply detailed, the Late Victorian form is characterized by a hipped roofline and a projecting hipped wing. This wing, with exterior access, might have served as an office. Decorative features are staid, including a deep cornice with boxed eaves, nine over nine windows, and a half-width front porch. Interior details curiously hint at an early construction date, such as capped door and window trim, a square stair newel post, and six-panel doors. The house is a special footnote for the neighborhood and represents the earliest history of Lindley Park.

Carter Spradling, a UNCG graduate student enrolled in Jo Leimenstoll’s class IAR/HIS 624 stated additional information: Given its early 1900’s construction date, the home was likely one of the first built in Lindley Park. The McClamroch Clan certainly put their stamp on Scott Avenue with the ownership and development of several properties along the street and have helped shape the neighborhood as we know it today.  The Harriman family has done a wonderful job preserving the architectural and historical character of the home that lives on in homage of Greensboro’s rich history. Upon entrance into the structure, one finds themselves in a formal foyer which once lead to the back of the house via a hallway.  Typical of many homes of the time period, to the left is a front parlor with fireplace, while taking the door to the right leads to a living space and formal dining room.  Inspection of the detailed craftsmanship reveals a capped door and window trim, a square stair newel post, and six panel doors.

Detailed Craftsman Bungalow Displays Original Features
May 3, 2019
Please Join Us!
Did you know? As Greensboro’s only not-for-profit advocate for historic preservation, we receive no funding from city, state, nor federal sources. Our success is based on your support. Members receive two free passes to Blandwood, and much more. Preservation Greensboro is among North Carolina's oldest city-based organizations dedicated to saving our community's architectural treasures!
Join Us!
Go to Top
Loading Comments...