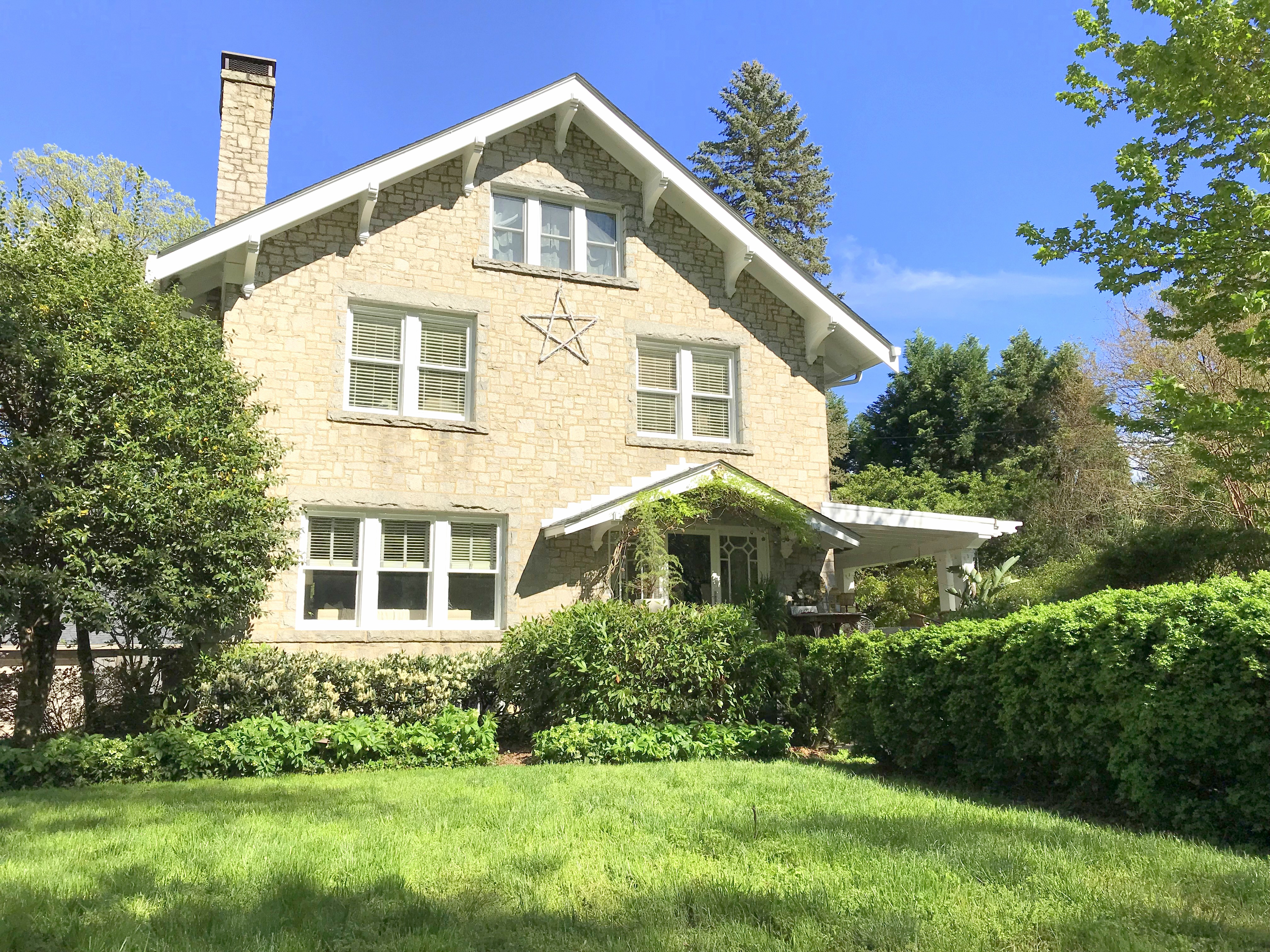 The Kathryn and Charles Bennet House, located at 639 Scott Avenue, was historically known as “Oakhurst” and displays unusually fine stonework by a family of stonecutters. Charles Elias Bennett Sr was born in Salem to a family of Moravian stonecutters. His father and uncle jointly owned Bennett’s Granite Quarry and operated the Winston-Salem Granite Works. On Christmas Day, 1919, Charles married Kathryn McClamrock, who lived with her parents at 205 Scott Avenue (see house #9). Charles found employment with the Jefferson Standard Life Insurance Company in 1919, where he remained for the duration of his professional life. His highest position was Assistant Secretary there. He was also a 33rd degree Mason and a member of the Scottish Rites Body, and the Shriners.  He was married four times and had three sons, Charles Jr., John Sanford, and Roland Lafayette. The Bennett’s put their home on the market in 1934 for $7,000 but it was not purchased until 1937, when it sold to Eva and Wilson Mitchell. The Mitchells appear to have rented the house back to the Bennett’s until 1953, when the pair divorced.

With familial connections to stone contracting, it is not surprising that Kathryn and Charles commissioned a stone house. Named “Oakhurst”, the $11,000 home features random-laid granite walls alongside a Craftsman-style theme of design that sports a high forward-facing gable roofline, paired and tripled windows, diagonal eave knee-bracing and a covered front stoop. To the south of the house extends a pergola. Interior appointments include a grand staircase, a fireplace with mantel, and a gracious dining room. A garage to the rear matches the house in design and material. The gardens around Oakhurst include an impressive English boxwood-lined walk, and a landscaped back yard renovated in 2015 to enhance privacy.

Karen Crickmore, a UNCG graduate student enrolled in Jo Leimenstoll’s class IAR/HIS 624 supplied this additional information: Wilson S. Mitchell, who also worked in insurance, took over ownership of the property in 1937, followed by W.M. Schlitz in 1941, and R.M. Johannesen around 1944. Presumably, Johannesen retained ownership of 639 Scott Avenue until the mid-1980s, when the property exchanged hands a few more times. James and Nancy Carrier became the property owners in 1985, followed by Robert Marcius in 1989, and Kathleen Mason in 1996. Kathleen Mason, later Kathleen Clark, was the last property owner of 639 Scott Avenue until its current owners, the Littles, took ownership in 2014. Despite its varied ownership history, the house at 639 Scott Avenue has been well preserved. The roof and foundation have been updated, and the kitchen was renovated around 2015, but key features like windows, flooring, and hardware have been largely retained. The landscaping on the corner lot has been beautifully cultivated, with the addition of a garage in 1978 and a stone feature in the more recent years.

Storybook Tudor in Lindley Park Open for Tour
May 1, 2019

The Secrets of Lindley Park
April 24, 2019
Please Join Us!
Did you know? As Greensboro’s only not-for-profit advocate for historic preservation, we receive no funding from city, state, nor federal sources. Our success is based on your support. Members receive two free passes to Blandwood, and much more. Preservation Greensboro is among North Carolina's oldest city-based organizations dedicated to saving our community's architectural treasures!
Join Us!
Go to Top
%d bloggers like this: