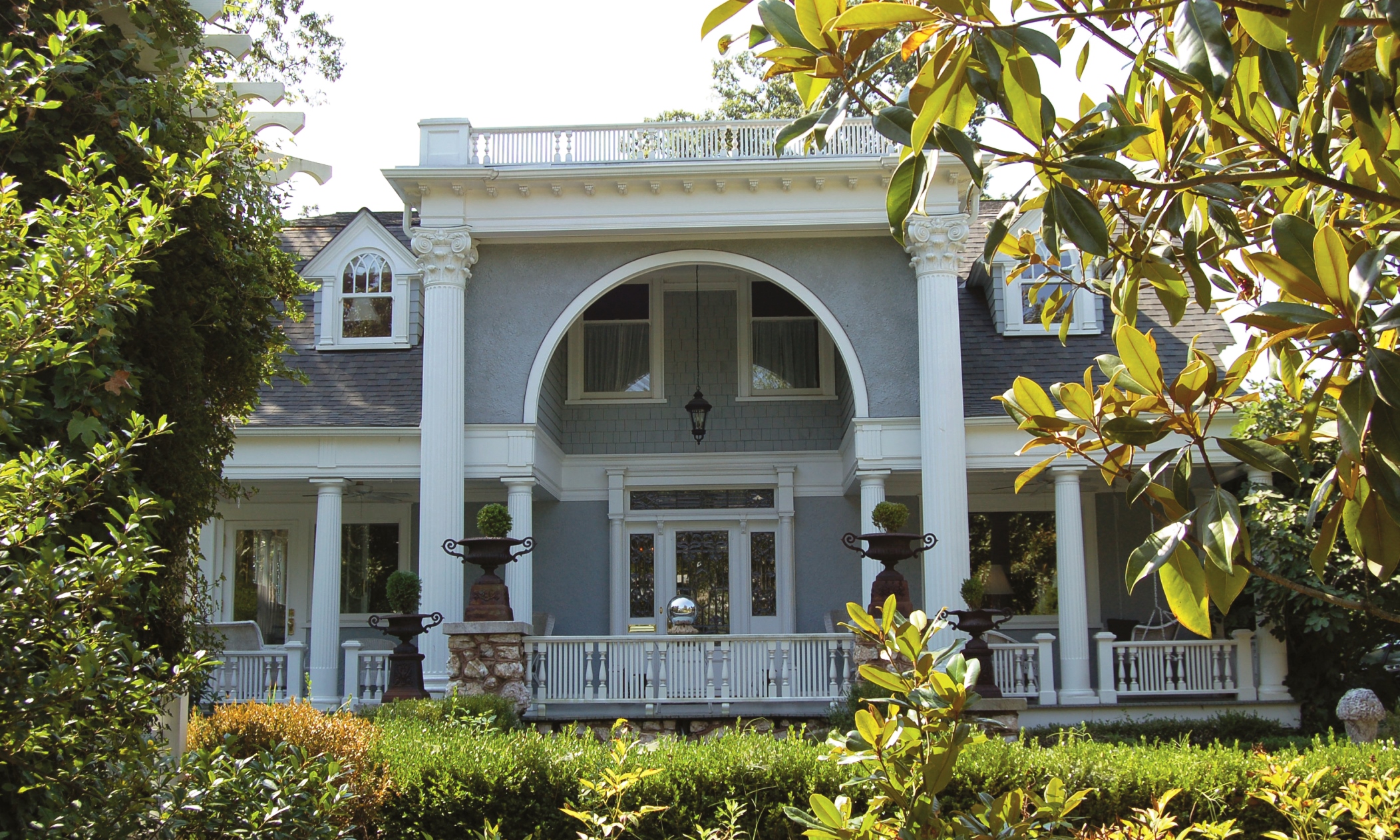 A celebrated Greensboro residence in the Fisher Park neighborhood has been resurrected and recognized as an official county landmark. The Greensboro City Council has approved Guilford County Landmark designation for the 85-year-old “Eagle’s Nest, or Walker-Carmichael House at 314 Isabel Street in Fisher Park. The home was nearly lost to a disastrous fire in 2004, but it has been meticulously restored to its pre-fire appearance.

The grand Walker-Carmichael House was a latecomer to Fisher Park; constructed after much of the neighborhood had already been built out.

Named “The Eagle’s Nest” for a large statue of an eagle placed atop one of the granite piers at the front entry to the yard, the Walkers home was constructed on a sumptuous level. Charlotte “Lettie” Hollingsworth (1879-unk) was a native of Virginia. She married George Hammitt Walker (1862-1919), a native of Ohio in 1904. built this grand residence in 1919. The couple named their previous home at 212 South Park in the same manner. George was a travelling salesman for Wysong & miles Machine Company of Greensboro. Tragically, George died just 10 days after he and his wife moved into their new home. Lettie sold the house to Laura and Charles P. Carmichael in 1922. Carmichael was the manager of J. W. Jones and Company, a wholesale grocery firm that stocked “the choicest in all varieties of general groceries and table delicacies, imported and domestic.” J. W. Jones was located in the three-story brick building today occupied by Natty Greene’s Brewing Company.

The house is a hybrid design that blends several styles, including a Dutch Colonial gambrel roofline, a triumphant arched Neoclassical-style portico, Colonial Revival dormer windows, and even Shingle-style siding. The home is built upon a milk-quartz foundation, a local stone said to be the world’s third hardest rock. Interior appointments are unusually sumptuous, including floors of Birchwood, stair railings of Mahogany, ornate mantels, plaster cornices, and coffered ceilings. Unusual features include the curved, or “ogee” French Doors, and stained glass windows in the dining room. The house was modernized after a 2004 fire, including renovations that upgraded bathrooms, kitchens, and mechanical equipment while retaining the original floor plan, architectural features, and finishes.

The one-and-a-half story frame house is notable for its classical features. Its design was inspired by the Neoclassical architecture that characterized the World’s Colombian Exposition in Chicago. The event utilized classical themes such as arches, porticos, cornices and pilasters to provide the exposition an architectural theme. Fair-goers found the resulting “White City” so beautiful that the sought to replicate its grandeur in towns and cities across the United States.

The Walker-Carmichael House sports several elements key to the theme of the “White City,” including a grand portico that sports Corinthian columns, a high rounded arch, a cornice, pilasters and a requisite white paint job. It is one of only a handful of neoclassical residences in the Gate City. Other architectural elements are unique to the house, including the flagged French Doors (image, left), and coffered ceilings.

With this designation, Guilford County now hosts 89 Landmark-designated properties that are preserved for future generations to explore and enjoy. Guilford County’s Landmark designation program has been active since 1980. It is a voluntary program that couples limited tax deferral with a permit process for alterations to historic features.