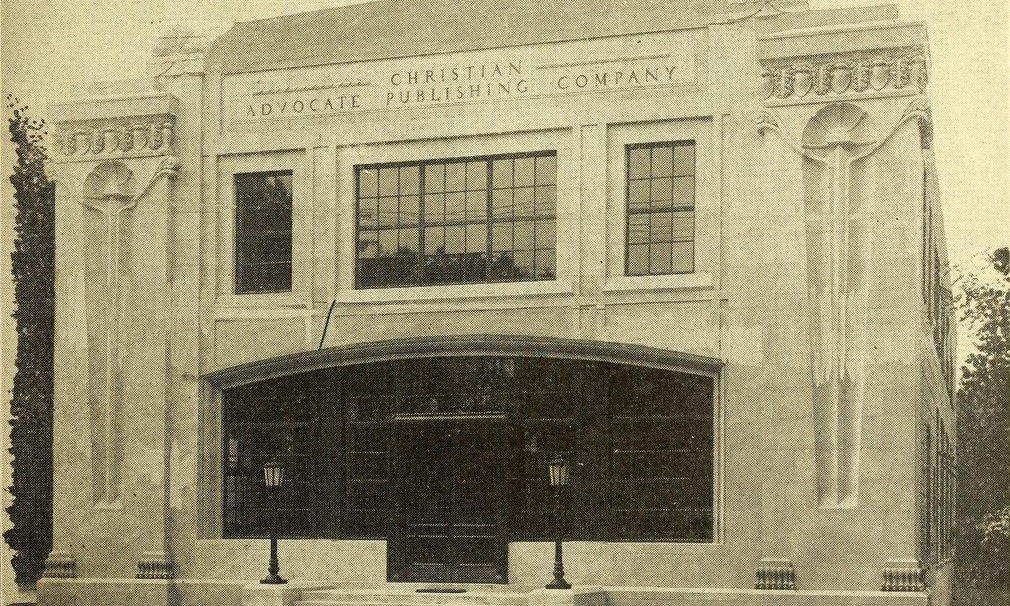 A concerned citizen notified Preservation Greensboro staff that a demolition permit had been issued on May 3 for the former Christian Advocate Publishing Company Building (now owned by an entity controlled by Greensboro’s Masonic Temple) at 429 W. Friendly Avenue downtown. This discovery set into a motion a frantic rush to avert demolition of the Egyptian Revival structure, and to explore a win-win-win arrangement between the Masons, historic preservation advocates, and the community’s tax base. The possibility of such an arrangement took a big step forward last night when the Masonic Board with control over the property unanimously approved a plan proposed by the Preservation Greensboro Development Fund to delay demolition for six months while an alternative to demolition is sought.

By the time Preservation Greensboro was made aware of the planned demolition, the Masons had already entered a legal contract to demolish the structure over Memorial Day weekend. Challenges in saving the building included re-use proposals, financial considerations, and a quick timeline that was measured in days. The structure is one that many people enjoy because of its architecture singularity. Greensboro-based architect Charles C. Hartmann designed the structure in 1927 with an unusual cast-stone façade of sinuous lines that locals referenced as “Egyptian”. Perhaps further research will reveal additional storylines related to the appearance of the façade.

Over the past two weeks, Preservation Greensboro volunteers and staff have held discussions with area developers who have experience and resources to complete a restoration campaign. The Masons have taken time to make the structure available for numerous visits to explore the wide-open interior spaces that originally housed large printing presses. Interior details are not as elaborate as the front façade, but the space has an industrial feel that is an increasingly popular aesthetic for developers and designers.

May 23rd was the date set to allow Preservation Greensboro to make a final pitch to propose an alternative to immediate demolition for the building.  With a timeframe extending for more than a few days to evaluate potential scenarios for adaptive re-use, preservation advocates believe a deal to save the building could be feasible.  Such deals require time to evaluate the real estate market, structural needs, and financing options, among other factors.

Therefore, the pitch that was made to the Masonic Board last night was for more time to allow the Masons and Preservation Greensboro Development Fund to evaluate and pursue potential alternatives to demolition. An adaptive reuse venture could offer a better financial outcome for the Masons and a much better outcome for the community versus demolition for a parking lot.   Now that the pressure of impending demolition has been alleviated for at least six months, preservation advocates and developers should have ample time to propose sound plans for the continued use of the structure.

The Christian Advocate Publishing Company Building is an excellent candidate for adaptive reuse. The City of Greensboro Planning Department has applied for a Historic Preservation Fund matching grant to update Greensboro’s Historic Resources Survey. The purpose is to identify historic buildings, especially in the downtown, that may be eligible for historic rehabilitation tax incentives. This project will support investment in the rehabilitation of the city’s inventory of vacant and underutilized buildings. The City recognizes that our historic buildings are a valuable resource, not only for their economic development potential but also because they are such an important part of Greensboro’s unique identity. The Egyptian Revival façade of the Christian Advocate building has long been recognized as an important feature in downtown Greensboro’s streetscape, and it is anticipated that the structure will confirmed as a suitable candidate for rehabilitation tax incentives.

Historic preservation advocates can now breathe a sigh of relief that demolition of this unique building will not occur over the Memorial Day holiday weekend. However, the hard work will continue to find a capable and visionary partner for this project that will undertake a rehabilitation and conversion of this structure.

Preservation Greensboro Development Fund is a non-profit corporation formed in 1988 through grants from several community foundations to Preservation Greensboro. The Fund provides service to the community through a variety of legal interests. It works as a “revolving fund,” a pool of capital created and reserved for historic preservation activities – with the condition that the money will be returned to the fund to be reused for similar activities in the future. The Fund’s all-volunteer Board of Trustees has assisted in the restoration or conservation of properties in Downtown Greensboro and in the Greensboro neighborhoods of Asheboro Square, College Hill, Southside, Cedar Street, Fisher Park, Glenwood, and Irving Park.  Additionally, the Fund has assisted in planning efforts in the Summit Avenue neighborhood and Southside, and it has served communities throughout Guilford County including Whitsett and High Point.