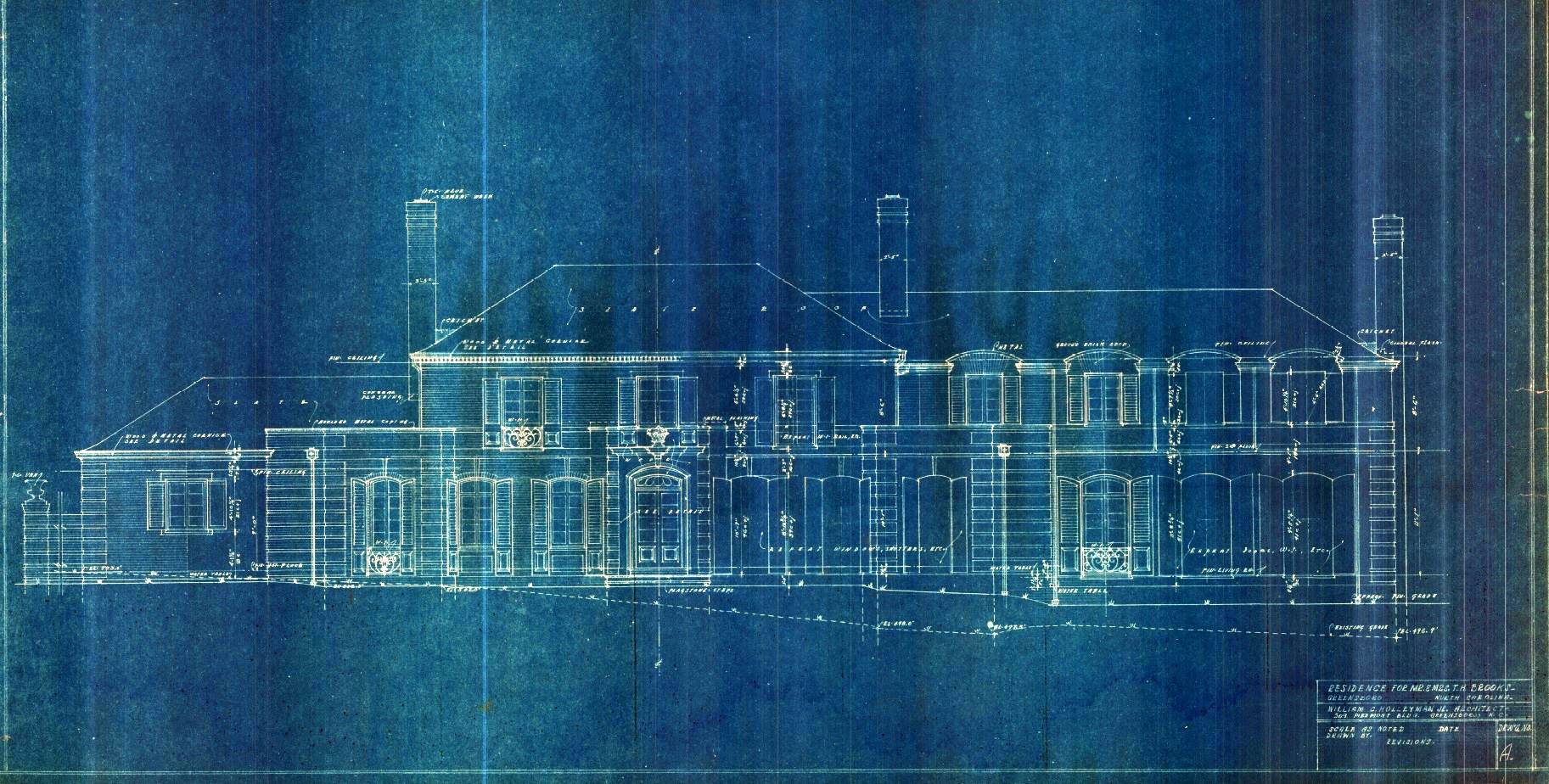 Once abandoned and occupied by squatters, the Margaret and Thornton Brooks House, located at 415 Sunset Drive in Irving Park, has been approved for designation as a Guilford County Landmark by the Greensboro City Council.

Currently owned by Ashley and Sam Simpson, the elegant French Eclectic residence is a rare example in North Carolina. It was built in 1936 to designs provided by Greensboro architect William C. Holleyman, Jr., for clients Margaret and Thornton Brooks. Brooks was a prominent attorney who specialized in labor and employment litigation. He was a graduate of UNC Chapel Hill and was admitted to the North Carolina Bar in 1934 before joining his father’s law firm Brooks, McLendon, and Holderness. Over the course of his professional life, Brooks was quite active in civic circles. He served as chair of the Rules Committee of the U. S. District Court, Middle District and served as a director of Jefferson-Pilot Corporation. He served on the Greensboro School Board beginning in 1955 and served as chairman from 1958 to 1960. During this time, the board focused on implementing the Supreme Court decision of Brown v. Board of Education and initiating racial integration of city schools.

The Brooks’ received the property as newlyweds from Thornton’s parents in 1935. Their residence was designed to reflect American’s fascination with historic European architecture. The architecture of the house is influenced by Neoclassical traditions found in France in the 1700s, including features such as symmetrical facades; segmental arched windows, doors, and dormers; quoins at corners; keystones; and capitals. Perhaps the style was selected because it was unique in the neighborhood celebrated for its architectural diversity.

The rambling floor plan is typical of houses of grand houses of the period, with a central entrance hall and staircase flanked by public rooms. The public rooms are rich with detail, including walnut paneling in the library, an octagonal parlor, a sunken living room, all adorned with period lighting, plaster and wood neoclassical moldings, and marble and hardwood floors. The staircase is notable for having an oval plan.

The house was expanded in 1961 according to plans drawn by legendary Greensboro-based designer Otto Zenke. Zenke maintained a Neoclassical vocabulary for the exterior of the addition, which contained a guest bedroom on the first floor and dressing rooms and bath on the second floor. In 1984, the kitchen was expanded through plans provided by Otto’s brother and sister-in-law, Henry and Virginia Zenke.

In 1994, the house and grounds were included in the Irving Park National Register Historic District. The district was awarded recognition based on its contributions in community planning and development, as well as the architectural significance of commissions by architects such as William Holleman as exemplified by the Brooks House.

By 2008, the once grand Brooks House fell into disrepair due to personal and financial distress of its owners. By 2016, the house was occupied by squatters, and attracted attention by local press for its dilapidated state in the heart of Irving Park. Builders and developers were lured to the potential of the property’s 2.5 acres for redevelopment.

In 2017, Ashley and Sam Simpson initiated work to acquire the house and its majestic grounds for use as their home. In spite of an aggressive bidding process, the couple was awarded the house and gardens, allowing them to embark on a restoration that preserved key architectural features that maintained the authenticity of the property. The couple restored and enhanced original floors, wall coverings, moldings, windows, and even a section of original wallpaper. Today, the house appears much as it did upon completion of the two Zenke additions, with exception of contemporary mechanicals and technology.

The restoration project tapped into North Carolina Historic Tax Credits, a tool used to encourage reinvestment in historic buildings through adherence to the Secretary of Interior’s Standards for Preservation. Approval of tax credits is administered by the North Carolina State Historic Preservation Office after favorable findings of a thorough review process.

In spite of damage caused by abandonment over the past 10 years, the Brooks House today stands as an unusual example of French Eclectic architecture that is well-preserved and remarkably authentic. Guilford Landmark designation will provide guidance for future changes and alterations to the house and grounds. This guidance is provided through a Certificate of Appropriateness, issued by Guilford County Planning staff upon review by the Guilford Preservation Commission. Designation goes with the deed. Landmark property owners receive a Guilford County property tax deferral up to 50% of the valuation of the property. The deferral compensates for maintenance costs of historic properties and better ensures long term stewardship of properties.

Historical information for this article was derived from historians Samantha Smith and Rebecca Lowe.