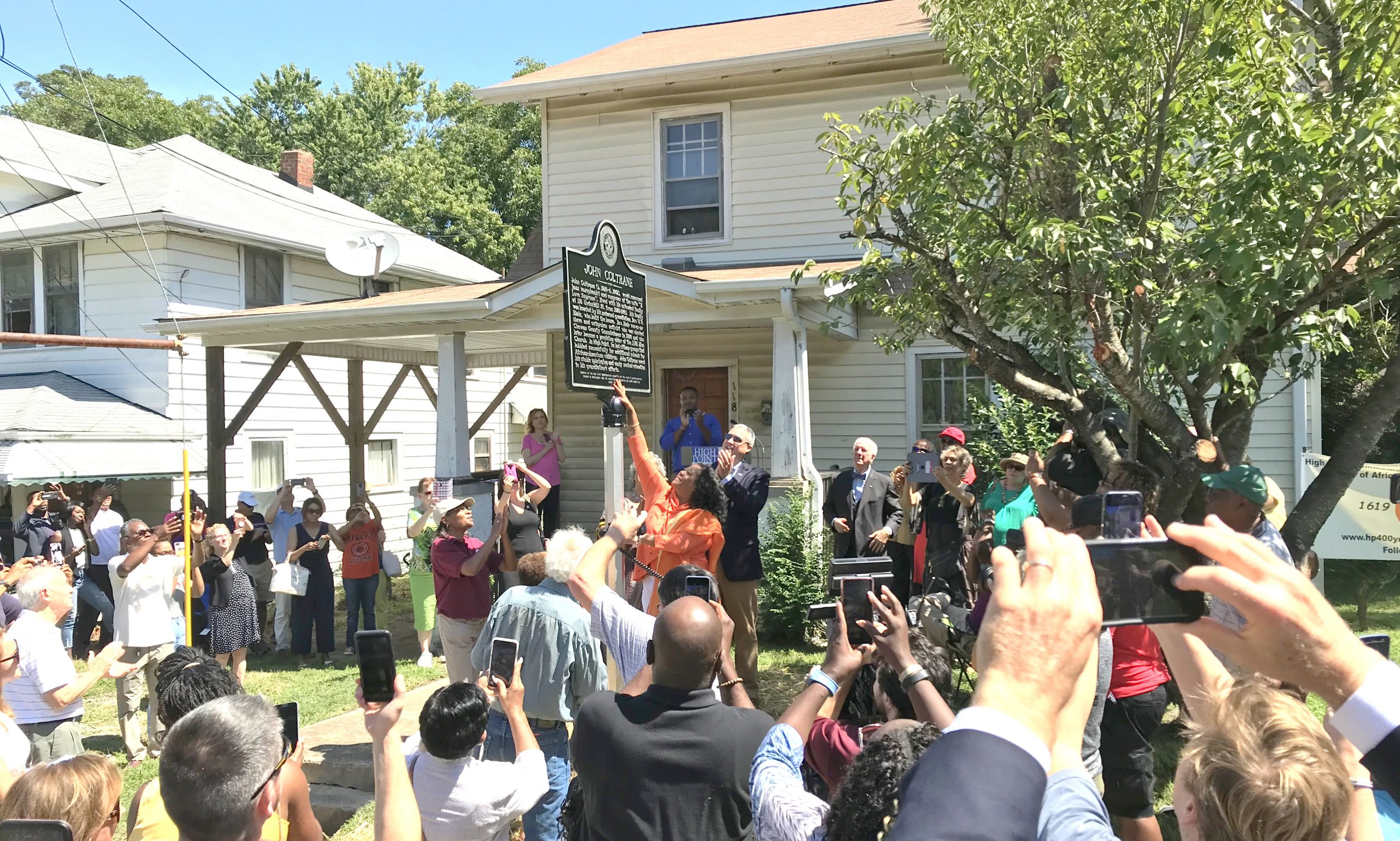 Once nearly forgotten, the childhood home of jazz legend John Coltrane is slated for preservation and extended new use as an historic site.

John William Coltrane was born in 1926 to Alice Gertrude Blair and her husband John Robert Coltrane in Hamlet, North Carolina. The young family remained in Hamlet only two months before moving to a house at 113 Price Street in High Point. The house was owned by Alice’s father, Reverend William Wilson Blair. In 1928, Reverend Blair purchased a vacant lot at 118 Underhill Street in an upscale new subdivision named Griffin Park. From the start, Griffin Park was to be an upscale community for African American citizens of means, including distinguished lawyers and doctors. Young John Coltrane moved with his extended family into this house in 1937 and remained a part of the household until 1943. However, the intriguing history of the house does not begin with John Coltrane.

The patron of this extended family was John’s grandfather, Reverend W. W. Blair (1860-1938). Born into slavery in Chowan County, North Carolina, he was educated and capable, and rose within the ranks of the progressive Republican party. The party was a safe harbor for African Americans against the conservative and racially restrictive politics of Democrats. Blair was appointed head of the Chowan County Republican Party and was elected as a County Commissioner. He held an adversarial role to the powerful white-led Democrats and his testimony providing an alibi for a man charged with rape led to accusations of perjury by white supremacist Democrats. He was tried, convicted, and jailed in 1903, thereby weakening the organization of local Republicans. Sympathetic Chowan County citizens petitioned for his release from jail and he was pardoned by Governor Charles Aycock in 1904. Blair left North Carolina and moved his family to Tampa, Florida in 1908, where he served in the AME Zion Church there. Blair worked within the AME church across Florida, and even served briefly in East St. Louis in Illinois in 1915, before returning to North Carolina in 1917. He served the large St. Stephen AME Zion Church in High Point beginning in 1920.

John Coltrane spent his teenage years in his grandfather’s house on Underhill Street, where he attended the nearby William Penn High School, roller skated down the hill on Underhill Street and sang in the choir of his grandfather’s church. These were formative years for the young man, who have faced frustrating and aggravating restrictions in the American South under Jim Crow Laws. Predictably, John left High Point in 1943, never to return.

The Underhill Street house, now known as the Blair-Coltrane House, is a two-story, frame structure built in the style of Dutch Colonial architecture. The side-hall entry with stair opens to a large parlor with a corner fireplace. A dining room and kitchen round out the first-floor plan, and three bedrooms and a bath comprise the second floor. The house retains a high degree of original materials that lend to the authenticity of the site, including window sash, flooring, built-ins, a fireplace and mantel, stairs, and plaster walls. A complete assessment of the house was completed in 2019 by Winston-Salem architect David Gall.

The house has been owned by the City of High Point since 2006, when it was used for a dozen years as rental housing. In reaction to growing interest to celebrate the history of Coltrane in High Point, the city appointed a Coltrane Project task force in March 2019 to include community leaders, historians, preservationists, and musicians. The task force is gathering information related to three areas critical to the care of the property, including a History Committee, a Site Function Committee, and a Preservation Committee.

A number of accomplishments have been completed over the course of the past year. In August, the History Committee orchestrated the placement of a city historical marker to John Coltrane in front of the house. The Committee has also gathered facts on the Coltrane family genealogy, gathered photographs, and has investigated the existence of surviving furnishings. The Site Function Committee has held a community meeting to gauge neighborhood support for various uses of the house, that range from an interactive exhibit space to community office use. Tours have been conducted of the house for local conventions and convenings. The Preservation Committee has organized a property clean-up (images, right)

and is working to see that the house is designated as an historic property.

Over the next several months, work will continue as community opinions for site usage are compared with functional capacities of the property such as floor loads and safety needs. Additionally, work should begin on designating the site as a local Guilford County landmark through city council. As plans continue, fundraising goals will be established to restore and interpret the house in its extended use.

Other sites with close associations to Coltrane exist in Hamlet, Philadelphia, and Long Island, New York. The later two sites are both already recognized to the National Register of Historic Places due to their relevance to Coltrane during his most musically productive years. However, the High Point site is connected to Coltrane’s most formative years, and still holds community connections to nearby Washington Street and the William Penn Auditorium where he performed in the 1930s. Through the work of the Coltrane Project, High Point’s role in Coltrane’s work may be better explained to fans and scholars of his work, and High Point should take more pride in the accomplishment of one of its most celebrated citizens.

Special thanks to historians Phyllis Bridges, David Tegnell, and David Gall for their research on the house and history.