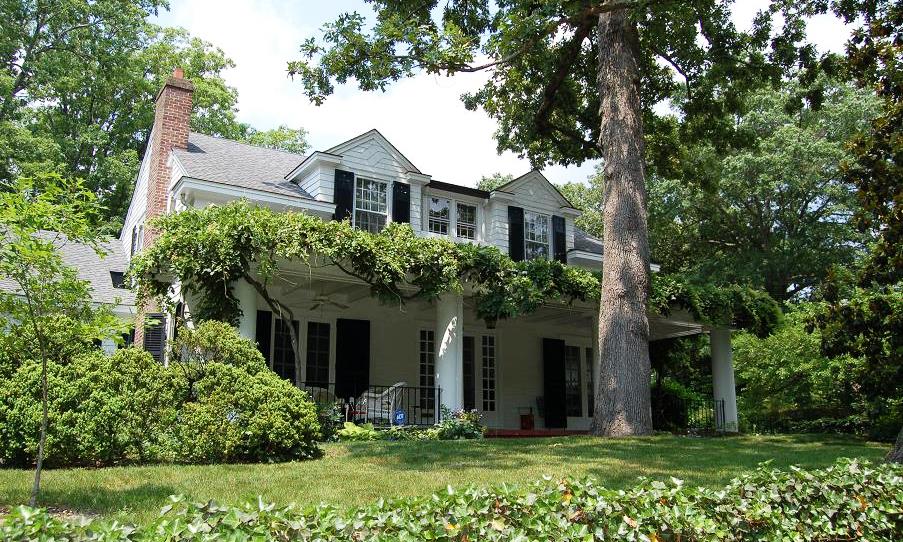 Wealth generated by the insurance industry, textile manufacturing and tobacco processing made Greensboro a focus of progressive architecture during the first half of the twentieth century. The growing business community worked within a national network of clients and suppliers demanded increasingly sophisticated designs for office and civic buildings. Simultaneously, wealthy citizens sought leafy suburbs where they erected commodious homes sporting nationally popular architectural styles. This was a Golden Era for the Gate City, and several architects established local offices to take advantage of growing demands. Among these was architect Raleigh James Hughes.

Raleigh James Hughes was born 1 June 1874 outside of Elmira, New York. Soon after his birth, his family returned to their native South where his father Saul (Solomon) Hughes took a job as a laborer at the Company Shops in Burlington. His mother Margaret died soon after their move. Young Raleigh grew up in Graham, and remained with the family after his father re-married, this time to Ella Woody.

Raleigh’s educational background is unknown. When Hughes applied for and received membership with the American Institute of Architects, he indicated that he was a graduate in architecture, was a holder of scholarship in architecture, and passed the qualifying exams in architecture. Three AIA members, Asheville’s William H. Lord, Greensboro’s Harry J. Simmonds, and Winston-Salem’s Willard Northup endorsed Hughes application, perhaps an indication of former employment or work relationships.  He began practicing professionally in 1907.

Though the entire body of Hughes’ work is unknown, early commissions were likely limited to residences. Around 1915, Hughes designed two houses that began to show the breadth of his work. In Fisher Park, the F. P. Hobgood, Jr. House at 115 North Park Drive took a Colonial Revival theme featuring period details unusual at the time (image, top of page). These details include the use of French doors accessing a generous front porch shaded by a trellis and supported by rounded masonry columns, use of wall-dormers featuring wood blinds and a window box, and skillfully articulated wood shingle walls that are coupled with an end-chimney to create an ensemble evocative of a New England

In Irving Park, the Dr. Parren Jarboe House, also constructed in 1915, stands at 206 Sunset Drive. It features exuberant Mediterranean details such as an Ionic entry porch topped by a Chinese Chippendale balustrade. A striking arched front door echoes a similar arched surround and transom window, and arched windows and wood blinds that display fleur-de-lis cut outs, and elaborate scrolled brackets along the eaves of the roof complete the façade of this impressive residence.

Around the same time, Hughes sold plans for a charming period Dutch Colonial house to the Brooks Lumber Company to construct on speculation. The lumber company erected the first rendition of

Hughes’ plan at 216 Florence Street – to which Hughes protested due to the improvisational use of rounded Tuscan columns at the main entry instead of academically correct square posts (image, right). The company’s second use of the Dutch Colonial plan at 201 East Hendrix Street utilized the appropriate square columns, as specified by the architect!

By 1917, Hughes was operating out of offices in the Banner Office Building on North Elm Street, and a promotional pamphlet printed that year espoused Hughes role in the development of Greensboro:

Mr. Hughes has been a very important factor in making Greensboro more beautiful. He has been here five years and during this period Greensboro has gained a reputation of having more artistic homes than any city in the State. His exceptional skill as a designer and his highly efficient service in supervising construction is constantly being appreciated in a larger territory. Just recently he was selected by the Commissioners of Surry County as associate architect on the new $100,000 Court House and also as Architect for Davie County Court House.

In 1920, Hughes received one of his largest commissions – a nine-story office tower for American Exchange National Bank at the corner of Market and Friendly, the central crossroads of Greensboro. Shortly thereafter, he relocated his offices to the

fifth floor of the building and submitted his application to membership with the American Institute of Architects (AIA) in 1921.

During the roaring 1920s, Greensboro grew rapidly as the city transitioned from a small town to the State’s third largest city. Hughes likely had a hand in numerous projects during that period but no inventory of his projects has been located. Glimpses of his work have appeared thanks to resources being made available over the internet, such as a home designed for James W. Brawley at 204 South Tate Street in 1922 (image, right). The $25,000 house announced in the Manufacturer’s Record under Hughes’ name alongside J. R. Truitt Construction is a curious blend of Craftsman forms and Ionic capitals

unique in the city. Another project commissioned by J. A. Matheson includes an eight-room house at 701 Sunset Drive in Irving Park. Also built by J. R. Truitt Construction, this home is an example of Colonial Revival design featuring an asymmetrical façade, an entry porch with a curved underside supported by lattice-filled fluted supports, the whole topped by a handsome tile roof.

By 1927, Hughes received his grandest commission: Pennybyrn. The imposing mansion cost $126,000 and its expanse spread over ten acres of woodland and lawns located on the main road connecting High Point to Jamestown and Greensboro (image, right). For owners George and Lena Penny, Hughes composed an elaborate beige brick façade festooned with substantial cast-stone trim framing arched windows and doors. Its hipped roof is supported by a modillion cornice of stone, and

details include relief carved into balconies under the second-floor windows and in blind arches of the first floor. Later that same year, he was married at 53 years old to his first wife Grace Betts, 26 years his junior.

The Great Depression that struck the nation in 1929 impacted Hughes almost immediately. Letter in the files of the AIA indicate that he did not have funds available to pay his membership dues, and late in that same year he wrote:

I am starting the new year with more than a years unpaid office rent, part of last years coal bill still unpaid, and several months behind with my Grocer, and this after having borrowed all of the cash value of my life insurance and raised all that is practical from every other source without sacrificing any of my property.

By the close of the next year, his membership with the AIA had been terminated.

Hughes remained professionally active into the 1950s. He was encouraged by Greensboro businessman Julian Price who commissioned a lodge in Blowing Rock. Price died in an automobile accident in 1946 and the project was discontinued. Hughes is remembered living at 303 Florence Street in Fisher Park where he took morning walks and reminded owners of homes he designed of his hand.  According to his daughter, Marjorie Hughes Bowman, he loved honey, dancing, the Bible, and the outdoors. He enjoyed hunting until a friend was accidently killed. In the early 1950s he was taken into skilled nursing care and he died in 1954.

Raleigh James Hughes was among the Gate City’s first professional architects, and helped to usher in an era of high growth and crisp architectural designs that brought new European and historical forms to the city. His portfolio included residential, civic, and commercial structures that are represented in nearly every historic neighborhood in the city – many of which remain well-preserved to this day.